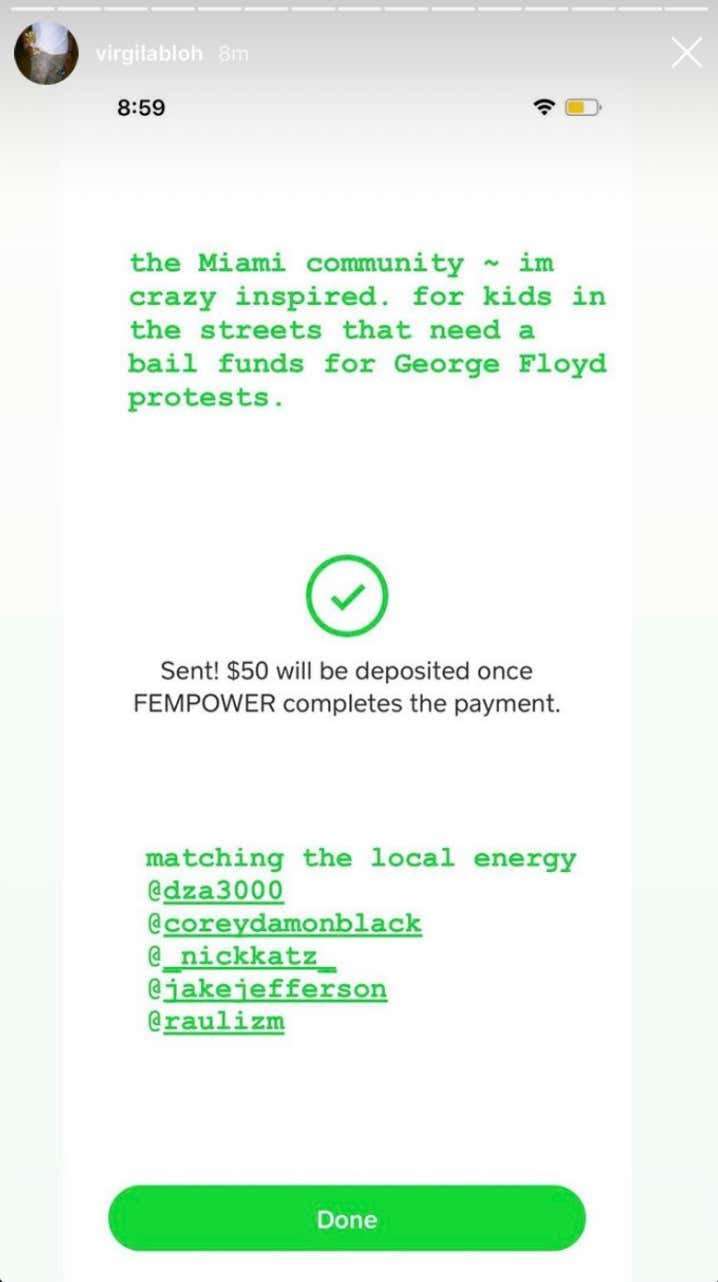 I'm usually on the other side of this argument. Most recently when Darren Rovell tried to shame Jeff Bezos for donating ONE HUNDRED MILLION DOLLARS to food banks. But there's two major differences here -

1) There does exist a certain threshold for generosity depending upon your level of wealth which you have to recognize if you're going to flex about it on Instagram.

You cannot...CANNOT...be a high fashion designer who essentially fabricated an empire of fame and money by tapping into the rich, elite pocketbooks of society and then turn around and donate 50 bucks, and subsequently brag about it. You want to quietly donate 50 bucks, thats fine. Maybe you dont feel as strongly about the cause to donate thousands of dollars. Maybe you dont trust the fund or the technology. All good. But once you put it out there in the public? Once you make it thing where you're trying to A) brag a little bit and B) try to rally other people and inspire generosity when you're clearly not being that generous? Well then you get thrown to the wolves on social media:

And I know there are people who are gonna say "I thought you said not to donation shame!" like I did with Bezos and the other mega rich people of the world. But thats because theres a certain level of money which, regardless of the percentage of your net worth, is an extremely generous gift. Bezos with 100 million, Teigen with $100,000, these are numbers that you dont need to go analyzing income statements, because plain and simple that amount of money is going to make a huge difference. If you're super rich, I think thats all you can ask - make a huge difference. Not "make a perfectly proportional amount of difference dependent upon your exorbitant income."

And this goes double for guys like Virgil Abloh owe their entire existence to the rich and famous snobs of the world. Slap some quotes and some zip ties on some sneakers, land a job at Louis Vuitton, steal the Jordan 3 and the Air Tech II's to "design" your "own" sneaker, and charge unimaginable amounts of money for regular ass clothes until you become a member of the upper echelon yourself. When your entire existence is about creating intentionally expensive clothes to create an air of rarity and exclusivity and calling it your "inspiration," you have GOTTA UNDERSTAND how it looks when you say you're "Crazy inspired" and give a 50 dollar donation. What would normal inspired look like?  10 bucks? Anybody who has a lot of money should understand this, but particularly a guy who's career a partly based on charging more money than necessary to be cool. When your socks cost $110 you cant expect people to be impressed with a 50 dollar donation. Thats less than one sock's worth!

You cant expect to be viewed as some sort of leader riding for the cause. Its truly an extremely basic PR move that anybody who's been in the game for like ONE SECOND would understand. I mean for fucks sake the people at Barstool all donated more than that. Ellie Schnitt donated 50 bucks to the Minnesota freedom fund. She's out of school like 15 minutes and trying to survive in Manhattan. Do you know what Ellie eats for dinner? Bad memories of her ex boyfriends and melted candle wax when she lights them up and listens to sad music. On a big night she'll cook up a bowl of Ramen. If she can donate 50 goddam bucks, then Virgil has gotta understand bragging about his same donation is not gonna be received the same way.

PS -  My argument on the other side is ordinarily "Until you donate more than that, shut the fuck up." Well just about everybody I've seen who's made a donation has matched that or exceeded it. So its fair game for just about the entire internet.