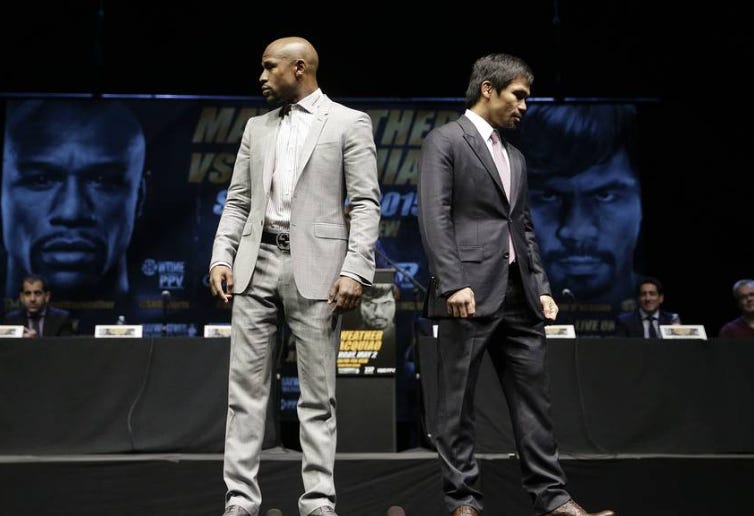 (Source) A month before boxers Floyd Mayweather and Manny Pacquiao even enter the ring, their May 2 title fight is already breaking records, with the pay-per-view bout set to cost fans $99 according to people close to the negotiations between the networks and TV distributors.

HBO and Showtime, which are handling negotiations for the camps of Mr. Pacquiao and Mr. Mayweather respectively, are expected to wrap up deals with major pay-TV distributors in the next few days for the highly anticipated welterweight title fight. The negotiations stalled last week as distributors and HBO and Showtime sparred over the split of what is expected to be record-setting pay-per-view revenue.

So this is what it feels like to have no options. Tease a fight for 5 years then when you finally put it on, jack the PPV price up to 100 dollars knowing full well that everyone will still buy it without even a second thought. You got me, you got all of us. I’m assuming most people will be splitting this fight with friends so it won’t be a huge deal anyway but just know, they own us. You don’t raise the price this much without knowing you can basically do whatever the fuck you want. People will  buy this fight no questions asked, it will break all the records and there is nothing you can say or do to stop it. Powerless as powerless gets.

Also, what’s the deal with the Standard option of $89? Are there people in this country who don’t own HD TV’s? That’s the only acceptable reasoning here because if you buy the non-HD to save 10 dollars then you just shouldn’t buy the fight to begin with. I would rather not watch this fight than watch it in regular definition. Ever accidentally click on a non-HD channel? I did that a few weeks ago and I still have a migraine from it. I don’t want to live in a world where Americans have to look at things in non-HD, that just shouldn’t happen.

For the people who are going to say I should just stream it for free online with one of those hacker sites, no thanks. Every time I try to do that I end up taking 10 online surveys, get a million pop ups and have to buy a new computer. Some people were born for the hacker life and I’m not one of them.