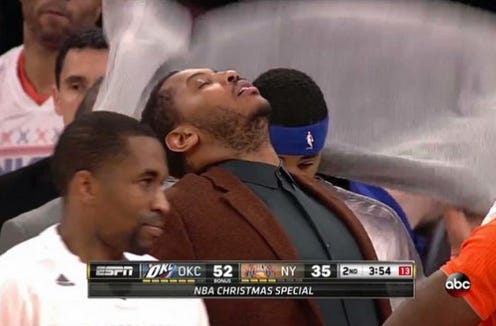 SI – Injured New York Knicks forward Carmelo Anthony hasn’t been seen on the bench next to his teammates in part because he is afraid of getting injured again by a hustling player who could run into him on the bench, according to Marc Berman of the New York Post. Anthony is out for the season and is expected to miss the next four months after having surgery on his left knee in February.  When Knicks coach Derek Fisherwas asked if that was the reason that Anthony was not on the bench, he said he didn’t know. “You can ask him that if you ever get a chance to talk to him or the medical staff,’’ Fisher said. “There’s been no discussion whether Carmelo would be sitting on the bench when he’s recovering from a major knee surgery.”

Carmelo Anthony, ladies and gentleman! This is such a bad excuse you almost have to respect it. I mean what I’d really respect is him coming out and telling the blatant truth – “I dont want to sit on the bench for the same reason most of the fans dont want to sit in the stands: I dont wanna watch this fucking team.” I’d probably just nod my head in agreement and be like “Understood.”

But if you’re gonna lie, I think I’d prefer it to be the worst lie ever like this one. Saying you’re afraid someone is gonna crash into you on the bench is one of those lies thats so fucking bad but there’s really no way to disprove thats how he really feels so you just gotta be like “OK asshole.” Its like when you blatantly lie to your girlfriend in an argument and she has no way to say you’re wrong. Like when she gives you the old “How would you like it if I…” and you just respond “I wouldnt care at all!” and theres nothing she can do about it. You know you’re lying and she knows you’re lying but you just Costanza it and make it true. You can tell Carmelo that theres like a less than 1% chance of him getting hurt by a diving player but if he tells you thats his main concern and hes trying to avoid that, what can you do? Other than call him an asshole, of course.

All in all just the worst teammate ever. Especially now that you see guys like Shumpert and JR Smith flourishing in Cleveland with Lebron. All that talk about Carmelo never being surrounded by any talent goes out the window when you see Lebron getting more out of those guys than Melo ever did. Its not the guys surrounding him, its the guy they’re surrounding.