Listen I could spend the next 10,000 words expounding upon Jason Kendall's career greatness and we still wouldn't put a dent in this guy's legend. His minor league bus spitters have more talent than most high school varsity programs. Rumor has it he didn't wear batting gloves because he enjoyed the pain of taking out splinters after doubleheaders. Literally - this is how Jason Kendall ends his career biography Throwback:

“And for all those fans who thought I was an asshole, you were right. But, I still respect you for loving the game.”

If God created Adam & Eve from clay then the Baseball Gods molded Jason Kendall from quickdry turface and fresh sod. He's the living embodiment of everything you want in a Baseball Guy including 254 career hit by pitches (5th most all time) and a staggering 3% HBP rate meaning 1 out of 33 plate appearances resulted in him getting drilled. Craig Biggio is considered the modern era's biggest target and he got drilled bout 1 out of 46 times he got in the box.

But Kendall was more than that. He walked 35 more times in his career than he struck out while averaging 139 games per season over a 15-year career that ended with a .744 OPS. Absolutely fucking staggering to think about and that's before I remind you he played on the Pirates from 1996-04. In 9 seasons those squads finished 4th or worse in the division 7 times while averaging 72 wins a season and having three separate #1 overall draft picks. On even a remotely memorable team, Jason Kendall would occupy much more space in your brain.

But this isn't just about Jason Kendall and why he's awesome. It's to be more specific in saying that he's objectively better than Yadier Molina. For that, let's talk to our good friends at baseball reference: 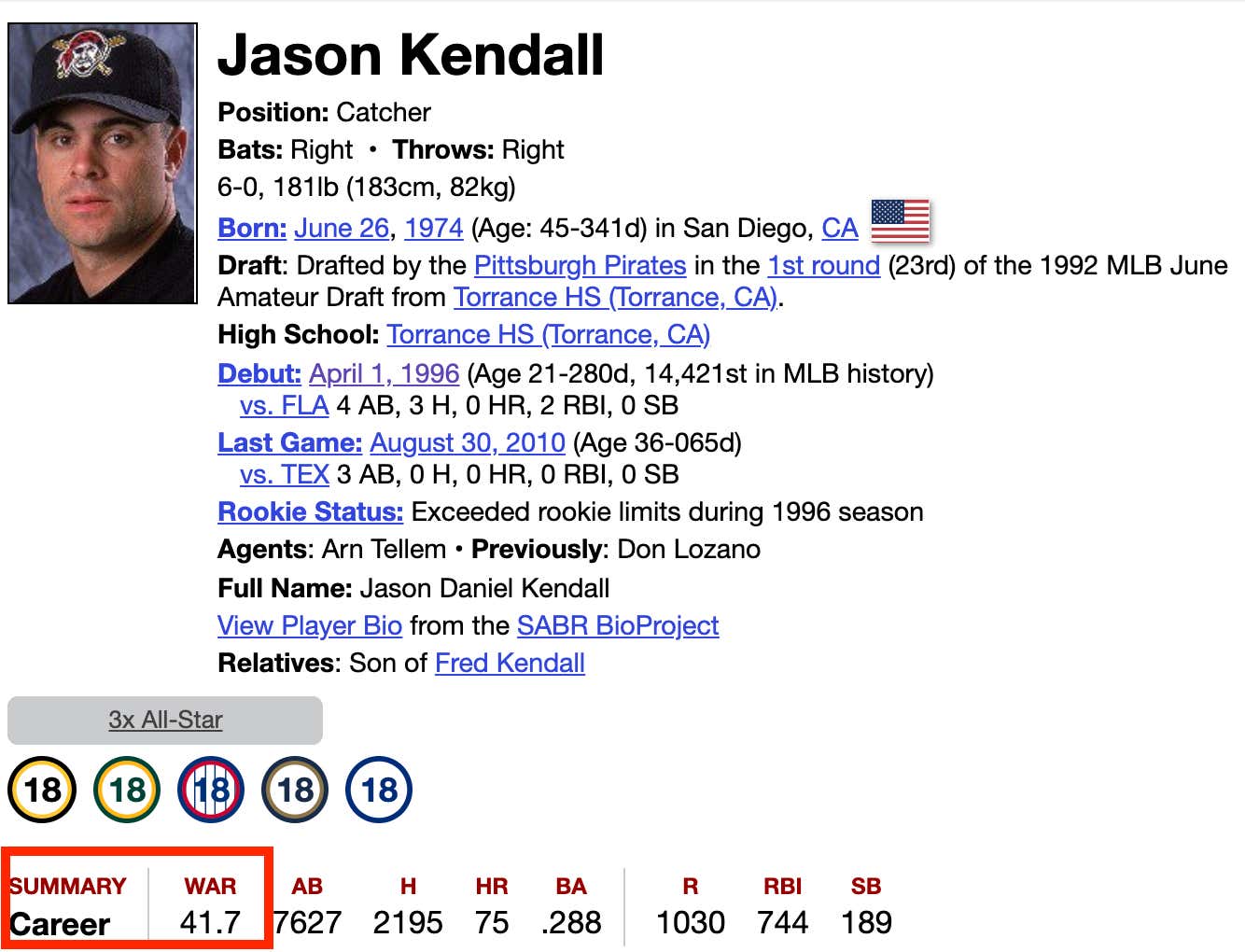 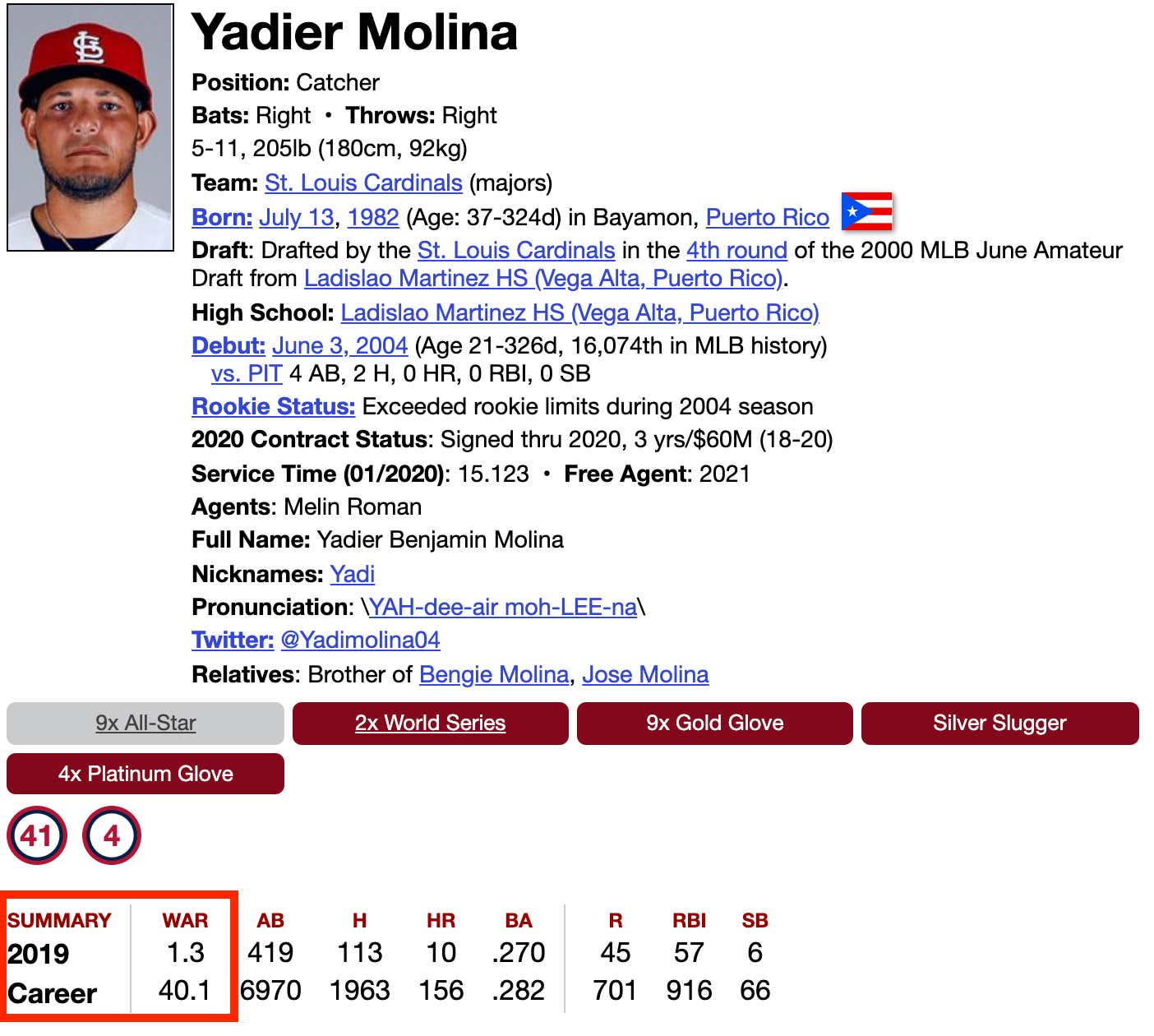 Oh shit is Wins Above Replacement a big deal? What about career batting average or OPS or playing on competent teams with actual pitching staffs? Kendall has more runs, hits, stolen bases, total bases, walks, on base percentage, (Is this stuff important? It's been so long since we watched a game that I forget.) doubles, triples, something called weighted runs created plus as well as K%. And that's before I even get into the advanced stuff like base running and durability so I'll stop here. I know there's a lot of subjective arguments to be made so go ahead and make them.

But first let me remind you that Gold Gloves and All Star appearances lead the way when it comes to the subjective. Yadi is the cute little brother from the legendary catching family. He played for LaRussa and won a bunch of games where Albert Pujols hit 3 and a Cy Young candidate threw 7 innings against 2000's NL powerhouses like the Pirates, Cubs, Red and Brewers. Cry me a river about his ability to catch and throw but don't tell me he's a 1st ballot hall of Famer when Jason Kendall can't even get a free meal at the local steakhouse. It's complete and total bullshit and I hope this blog serves as a Wake Up Call to all the non Cardinals' fans out there that I love so dearly.