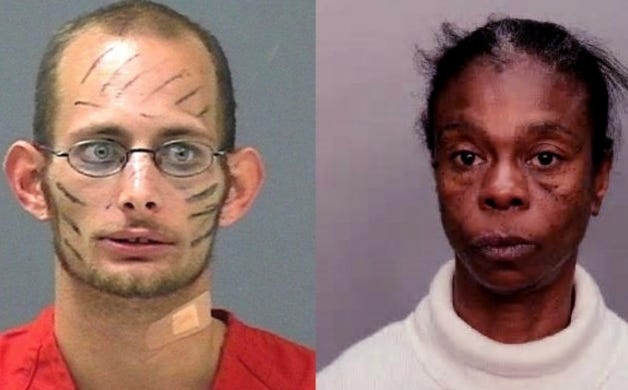 Tito and Amanda Watts were arrested over the weekend for selling “golden tickets to heaven” to hundreds of people. The couple, who sold the tickets on the street for $99.99 per ticket, told buyers the tickets were made from solid gold and each ticket reserved the buyer a spot in heaven — simply present the ticket at the pearly gates and you’re in. “People can sell tickets to heaven,” a Jacksonville police spokesman said. “But the Watts misrepresented their product. The tickets were just wood spray painted gold with ‘Ticket To Heaven – Admit One’ written in marker. You can’t sell something as gold when it’s not. That’s where the Watts crossed the line into doing something illegal.” Tito Watts said in his police statement: I don’t care what the police say. The tickets are solid gold… it ain’t cut up two by fours I spray painted gold. And it was Jesus who give them to me behind the KFC and said to sell them so I could get me some money to go to outer space. I met an alien named Stevie who said if I got the cash together he’d take me and my wife on his flying saucer to his planet that’s made entirely of crack cocaine. You can smoke all the crack cocaine there you want… totally free. So, try to send an innocent man to jail and see what happens. You should arrest Jesus because he’s the one that gave me the golden tickets and said to sell them. I’m willing to wear a wire and set Jesus up…

SOLD!  Only 100 bones to live in Heaven for eternity with sexy angels and people feeding me grapes?  I’ll take two.  I don’t care what the police say, either.  When I look at the mugshots of those two all I see are trustworthy people.  People who I’d let watch my kids when I go out of town.  People who I’d trust to water my plants.  And yes, people who I would trust if they came up to me on the street offering a golden ticket to Heaven for the rootin’ tootin’ price of 100 dollars.  You heard the man.  Jesus gave him the tickets behind a KFC so he could sell them on the street, make enough money to board the flying saucer and then fly to the planet made of entirely crack cocaine.  Free crack all day every day.  I gotta tell ya, my head is starting to spin there’s so many good points being made left and right by Ol’ Scratchy Face. He’s got life figured out. I didn’t appreciate the last part of his quote where he’s willing to sell out Jesus though.  Dude, he gave you the tickets.  He even said he’d wear a wire to set Jesus up!  Snitches get stitches bruh.  Snitches also don’t get to board the flying saucer to Planet Crack.  Watch your mouth and keep it shut.

Quite possibly the quote of the century from Mrs. Crazy

We just wanted to leave earth and go to space and smoke rock cocaine.