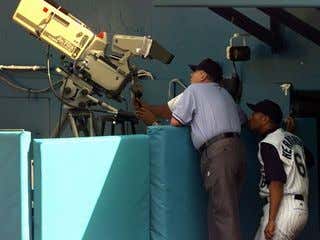 Umpire Frank Pulli uses instant replay to change a call during a game between the St. Louis Cardinals and Florida Marlins at Pro Player Stadium. The call comes in the fifth inning when Cliff Floyd of the Marlins hits a ball off the Teal Tower. A glare made seeing the ball nearly impossible for the umpires who change the call on a home run. Pulli decided to take another look and correctly called it a double as the Cardinals won the game 5-2.

Frank Pulli, a veteran National League Umpire, was no stranger to controversy. Born on Mach 22, 1935 in Easton, Pennsylvania, Pulli became National League umpire in 1972. He worked the game in 1974 when Hank Aaron broke the all-time home run record in Atlanta. In 1978 he ruled that Reggie Jackson did not interfere with a potential double play in the World Series against the Dodgers, allowing the Yankees to tie the game. He was placed on probation for placing bets with a bookmaker in non-baseball events.

By 1999, Frank Pulli had become a crew chief. He was working a late afternoon game in Miami on Memorial Day when he became embroiled in another controversy. The Marlins still reeling from the post World Series fire sale entered the game at 16-34 for their manager John Boles, who was under the weather and missed several games. That day they were led by Freddi Gonzalez. The Cardinals entered the game at 24-24 under Tony LaRussa.

The Cardinals jumped out to an early 2-0 lead on a two-run double by Ray Lankford off Brian Meadows in the first inning. The Cardinals extended the lead to 3-0 in the third inning with a double off the bat of Mark McGwire. Mike Lowell singled in Kevin Millar to put the Marlins on the board in the fourth. St. Louis quickly responded with a home run by Edgar Renteria. Down 4-1 in the fifth, the Marlins got a two-out double by Alex Gonzalez, setting the stage for the replay drama.

Cliff Floyd drove the ball deep to left field where a large scoreboard covered the folded up football seats. In the late afternoon, the ball was lost in the sun, causing confusion for the umpires. Gonzalez scored, as Floyd at second argued that it was a home run. The umpires huddled and ruled a home run, leading LaRussa to make his argument. As umpires were unsure if the ball clearing the fence, Frank Pulli went to the first base cameraman and looked at a replay in his monitor. The replace showed the ball hit high off the wall and stayed in the ballpark. After viewing it on the monitor, Pulli ordered Cliff Floyd back to second base. The Marlins would play the game under protest as Kent Bottenfield escaped further damage. The Cardinals would get a second home run from Renteria and won the game 5-2.

After the game, Frank Pulli was admonished for using replay, but the call would stand, as the Marlins protest was not granted. Frank Pulli would be among 22 umpires to file a mass resignation a few months later. When the umpires asked for their jobs back, Pulli was not return to the field, as he instead was appointed as a supervisor of umpires. A decade after Frank Pulli’s impromptu review, MLB began using replay on home run calls.