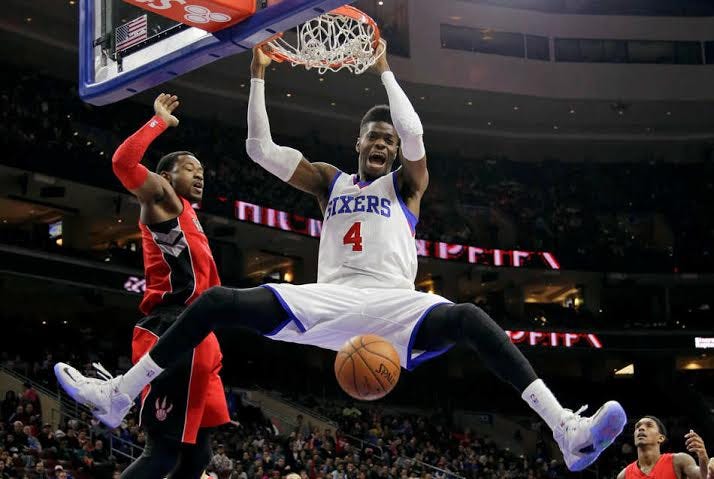 Nerlens Noel should be named NBA Rookie of the year. Most surprisingly, it has nothing to do with his stats, which will not catch your eye when looking at the box score, or the fact that he has the best hair do in the world (only Iman Shumpert can compete). Really, Nerlens Noel should win the ROY Award basically because he is arguably the most improved player in the NBA, arguably one of the best defenders in the NBA, and definitely a defensive force to be reckoned with for years to come. I say arguably because he didn’t even play last year so there is nothing to compare his improvement to and because there are guys who are much more established in the league who will win the Most Improved Award and Defensive POY Award. But if you look around the league right now, this race a two headed horse between the only rookies who are actually playing and contributing: Andrew Wiggins and Nerlens. (Editor’s note: Gotta put Nikola Miroti? in that threesome, too, but for the sake of the Intern pumping out a pretty good two horse blog, we’ll keep it like that.).
Taking nothing away from Wiggins, he’s had a great year. He’s averaged 35 mins a game and has played in every single game averaging 16 pts, 2 asts. and 4 rebs. He’s showed flashes of possibly becoming a great player throughout the season and is clearly the best true rookie in the league this year. But Nerlens deserves this award. You could tell at the beginning of the year he was not very comfortable with his game still. This is understandable since he had not played a competitive game of basketball in over a year and a half. But ever since he’s really settled in, especially as a dynamic force on the defensive end. The Sixers are significantly better statistically on defense when Nerlens is on the floor and obviously better when you simply watch them play without him on the floor. His weak side swat team senses are on point, just ask James Harden, and his ball screen defense is incredible thanks to his length and overall athleticism. He helps the guard and then recovers quickly to his man. To see a rookie have so much success defensively is encouraging. NBA defensive rotations are much different from college rotations and it takes most players 2 years to properly develop there team defensive skills. Nerlens has already accomplished that and his pure freakish athleticism makes up for most of his rookie mistakes. Besides the X’s and O’s, Nerlens averaged 3.7 steals per game in the month of March, and is tied with CP3 for the league lead at 1.9 steals per game, the first time ever a center has done so. His ability to turnover the ball on the defensive end is uncanny and watching Nerlens Noel swat a shot in a big moment is like going whale watching for the first time. Your pretty sure your going to see something cool and then when it happens and the whale actually jumps out of the water it’s a million times cooler than you thought it was gonna be and you want it to just happen over and over again until your eyes bleed.
Last, ever since the MCW trade, the Sixers have finally begun to look like a team that has some sort of direction. Our spacing is much better thanks to the PG tandem of Ish Smith and Iz Canaan who can shoot and play with a little spunk. Just in case you have not noticed the Bucks are something like 5-13 since the MCW trade. Surrounding Nerlens with shooters and slashers has opened up post plays that he is surprisingly comfortable with. His jumper looks so much better ‘than it used to maaaaaan’ and it shows in his stats. He’s averaging 16 points and 10 rebounds in his last 10 games not to mention his 2.2 blocks per game and 2 steals per game. His steady improvement throughout the season is something voters should be not only encouraged by, but excited about… and if this vine doesn’t get them to #VoteForNerlens than I don’t know what will.
https://vine.co/v/OiQIBh7OwQE
Steveo4/01/2015 6:30 PM
7