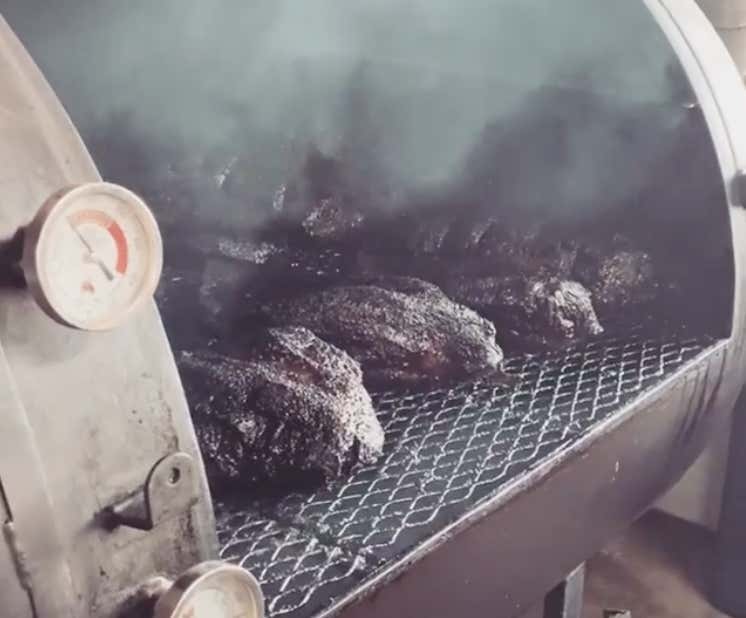 Brisket. On its own it's this super tough, massive cut of meat. You've got two different muscles going on, you've got some thick hunks of fat, it's really all just pretty inconvenient. But you light a fire and throw it over some indirect heat for 12 or 13 or 14 or 15 or however many hours you want, and something magical happens. You take something that was as tough as shoe leather and it turns into this velvety smooth bite that melts in your mouth immediately upon impact. It might take half an Earth's rotation to get to that point, but when you get it there? Great things come to those who wait.

Not saying that a steak that is cooked in under 10 minutes isn't equally as delicious. But it would be like if the only NFL game you watched all season was the Super Bowl. Would the game still kick ass? Of course it would. Especially if it were Super Bowl LII in which the Philadelphia Eagles beat the New England Patriots by a score of 41-33. But you'd appreciate it a helluva lot more if you watched the entire season leading up to the game.

So today is National Brisket Day. Typically I hate the "National _____ Day" because apparently there's a day for everything and I never know how people keep track of all these days. Like I'm pretty sure there are at least 43 different "National Puppy Days" every year (not complaining). But I'm not going to pass up an excuse to blog a bunch of pictures of brisket, so happy National Brisket Day to you and yours. And to celebrate, here are a few of my favorite pitmasters who are currently balling the heck out when it comes to this massive, inconvenient, beautiful cut of meat.

P.S. - I already wrote a blog on 5 of my favorite people in barbecue so I won't mention them here. But you can check out that blog here if you want to. We've got Brendan Lamb from Smiley's, Brett Boren from Brett's Backyard, Bryan Furman from B's Cracklin', Andrew Muñoz from Moo's Craft, and Matt Horn from Horn Barbecue.

Helped open Franklin Barbecue. Helped open La Barbecue. And now he has his own spot in Charleston, SC. I know some folks in Texas like to think you can't do Texas barbecue outside of the state but legends like John Lewis are the reason why it's spreading everywhere.

Central Texas barbecue with a new school flare. I'd imagine that LeRoy & Lewis are doing to the Central Texas barbecue game the same thing that the dunk did to the game of basketball. Just introducing a new component that blows your fucking mind at first, but then you can't even imagine what the game was like without it.

Also, Bradley Robison has a super easy brisket trim video to follow if anybody is looking to throw on one their backyard pit this weekend.

Joe Yim used to work with the guys from LeRoy & Lewis but he's a Chicago guy through and through. So after spending a few years down in Texas learning from the greats, he made his way back to Chicago and brought a massive 1000 gallon pit with him.

So I hope the Red Line Radio guys are ready for what's about to hit them. Because as much as they love their beefs in Chicago, I can't imagine it competes with what Mighty Joe is putting out.

So we're talking brisket and we've had a spot in Charleston, a spot in Chicago, and now we have a spot in Los Angeles. If I were a Texan, I'd feel flattered. I'm sure there will still be some in the comment section who will say you can't even talk about barbecue if you're not from Texas, but those folks are going to be miserable their whole lives anyway.

But yeah, Danny Gordon is a rockstar and this sick bastard has perfected what a barbecue sandwich should look like. Every time it pops up on my timeline, it's an immediate 5-minute pause on scrolling.