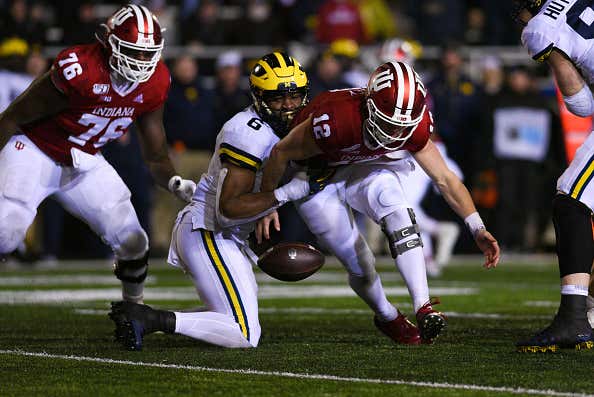 Just over a month ago, when the Patriots made a deal with Baltimore to send them the 71st and 98th picks to move up to the 60th (plus get the 129th) pick to take linebacker Josh Uche out of Michigan, it didn't exactly ping my sonar, so to speak. Yes, linebacker was and remains an area of need after losing Kyle Van Noy and Jamie Collins. But at first sight, Uche seemed like kind of a tweener. Too small to be an every down edge player in Bill Belichick's scheme at 6-foot-2, 238 pounds. But without much experience as an off-the-ball, second level linebacker, with only nine starts in four seasons in Ann Arbor. Kind of a positionless guy in what, to be fair, is becoming an increasingly positionless position.

Yeah, about that. One man's positionlessness is another man's versatility. And the deeper I look into this guy - in my desperation to find something, anything in this world to feel good about - the better I feel about him. Every profile you read about Uche sounds like he brings the same beserker mentality to the Front 7 that his Wolverine teammate Chase Winovich. And I'll argue that Winovich had the second best rookie season of any defender the Pats have drafted since Devin McCourty in 2010, behind only Chandler Jones. (Don't @ me about Collins; Winovich made way more impact plays.)

Let me start with this metric, which is not new by any means, but it's the first time I've mentioned it here.

Like I've said before, make what you will of the stats nerds, toiling away in the analytics factory under armed guards every day in hopes they can sneak up to the roof and jump off. But 22.5% pressure against the legit competition on the Michigan schedule is, as the kids say, impressive AF. Belichick makes no secret of the fact he looks for scheme-versatile defenders, but if he can get a guy who does one thing well, he'll take that and work around his other limitations. Never forget that he got double digit sack seasons out of Mark Anderson and Tully Banta-Cain.

But that's not to suggest Uche only rushes the passer well. In fact, the one thing you keep hearing about him from the college scouts is that his versatility is exactly the thing that makes him a perfect system fit in New England, with their multiple changing fronts and disguised rushes.

What I particularly liked about this video was the comparison between Uche and Van Noy, who was so under utilized in Detroit before fitting so perfectly into the Patriots scheme. And the part at the 8:00 mark where you see Uche going up against Iowa's Tristan Wirfs, who was the No. 13 overall pick, going to Tampa to protect that other Michigan Man's perfectly spherical backside. He not only shows a Pepperidge Farm cracker assortment of moves, at one point he bull rushes Wirfs three yards back into the quarterback's loving embrace.

Then there's the scouting reports we're getting from coaches who've actually worked with him. Michigan's defensive coordinator told NBC Sports Boston's Phil Perry that the first defense he looks to for offseason study is New England's.

"Coach Belichick's a smart guy," Brown said. "He sees a guy with versatility, a guy that is a gym rat, a guy that just loves being around the building. [Uche] is a very smart guy . . . a smart guy that you can do a number of different things with. We asked him on second and third down to be our prime-time guy, but that also takes the mental ability and the capacity to absorb all the calls and checks, alignments and assignments that he had.

"This year, he just flowed into it. A year ago, the '18 season, he finally came into his own about midway through the year. He had a great game against Northwestern and he's just kind of taken off from there ever since. Confidence is a big deal, as you know, with players, and I think that's what's happened with this guy."

And in the same article, Uche agreed that his career Crew Dragon capsule touched down on the exactly right landing pad:

"This is like a glove, like the perfect fit. There's still a lot of work to put in. There's different terminologies and different techniques that need to be learned. But in terms of how coach Brown runs his defense, the multipleness of the defense, [it's] very similar to what I did at Michigan."

Which brings me to this piece in Sports Illustrated, in which his old high school position coach Pedro Marti, who helped transition him from defensive line to linebacker and still works with him in the offseason:

… also says Uche's ability to attack from all over the formation is going to make him into a perfect Patriots defender.

"In some of the early discussions I've had with Josh, he said the Patriots have told him they envision being able to use him kind of all over the place and get him favorable pass-rush matchups, he said. "What I do know is that the Patriots like to give different front presentations, find ways to get their guys one-on-one matchups. I know Coach Belichick is big on getting one-on-one matchups vs. the offensive line by presenting five guys, whether its a Bear look or Mug look, and I think if you get Josh some one-on-one matchups, especially against some of the interior linemen in the league, the guards, the centers, I think Josh can make an immediate impact."

It's possible I'm getting way out over my skis on a 3rd round pick with nine career starts. That I'm way more optimistic about Josh Uche and need to slow my roll and give him a year or two to develop instead of jumping ahead to the part where I decide he's the next Tedy Bruschi or whomever. But to be fair to myself (and I always go way out of my way to be fair to me), irrational over-optimism is kind of my thing. Especially this time of year. Especially this time of this year. We need all the reasons to look forward to the 2020 season we can get and I apologize for nothing. Camp can't start soon enough.