[Source] - The Premier League season will resume on Wednesday June 17 – with Aston Villa at home to Sheffield United and Manchester City hosting Arsenal.

The two matches are in the ‘games in hand’ that will take all the 20 clubs up to 29 matches and have huge ramifications at both ends o the table.

Another Premier League game may be played on Friday June 19 but the full round of fixtures will start on Saturday June 20 with matches staggered across the weekend.

Fuck. Yes. Sports are coming back man and I couldn't be more thrilled. This time we have what appears to be confirmation of the Premier League returning and - wait for it - doing it in a way that makes a ton of sense. Shocking for a league to do that, I know.

So what they have planned is on June 17 two matches confirmed so every team will have played 29 matches. Then you can go into a regular schedule with each team having the same amount of games left. Again, just smart. I know some of you will say you hate soccer and all that, but can you really complain when it's a live sport on TV that you can watch and bet and cheer and drink during? No you shouldn't be.

Speaking of which, it's time for you to pick a squad. Let's reset where everything is right now. Here are the current standings (table, if you want to be proper) 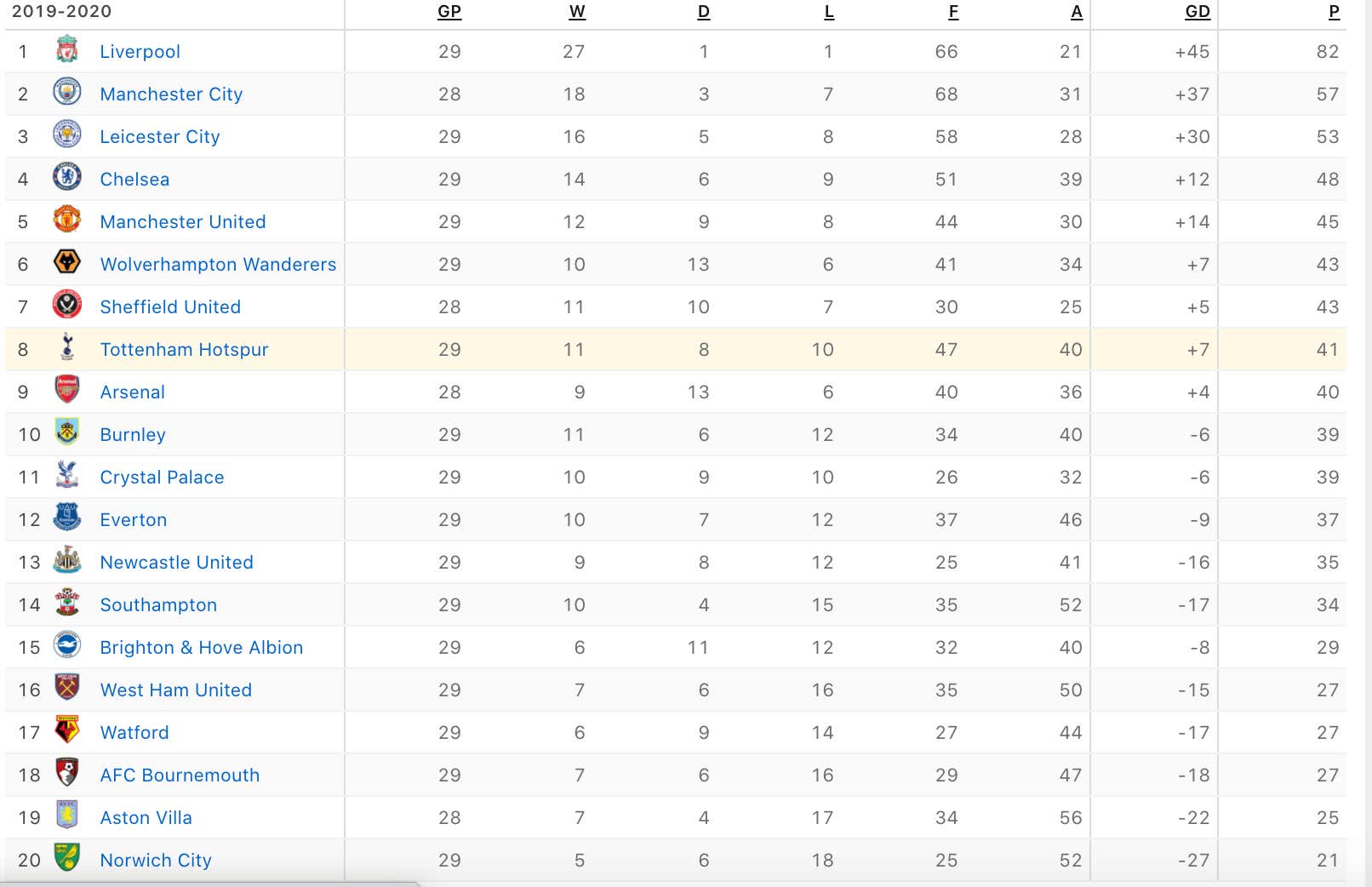 Yes, Tottenham is highlighted because I'm a Spurs fan. Deal with it. So what's important here? Obviously to start Liverpool is going to win the league. Like that's not even a debate. So the two important things here are the race for the Champions League and relegation. Let's start with Champions League:

Typically the top-4 from the EPL advance to Champions League. But Manchester City is dealing with sanctions (think NCAA Tournament ban) so it's likely that the 5th place team will slide in next year for Man City. So once we get these June 17 games in, every club will have 9 games left. We have a bunch of teams fighting for Champions League with a race between Manchester United, Wolves, Chelsea, Leicester City, Tottenham, Arsenal, Sheffield United and even Burnley/Crystal Palace. That's going to be an awesome race.

Then for relegation, assuming it goes as planned, it's the bottom 3 teams. Norwich City, Aston Villa, Bournemouth, Watford, West Ham and Brighton & Hove Albion are all in danger.

Now I'm mostly talking to Clem here who will 100% pick a team and throw support behind them, but this is for everyone else too. Pick one of those teams in the race for Champions League, You'll have something to cheer for and can be invested until whatever sport you want on down the road. If you need more assistance, our guy Sam writes a blog each year about who to pick as a team:

I can't wait to sit down on a Saturday morning watching Harry Kane and Son score. Get your ales and join me.