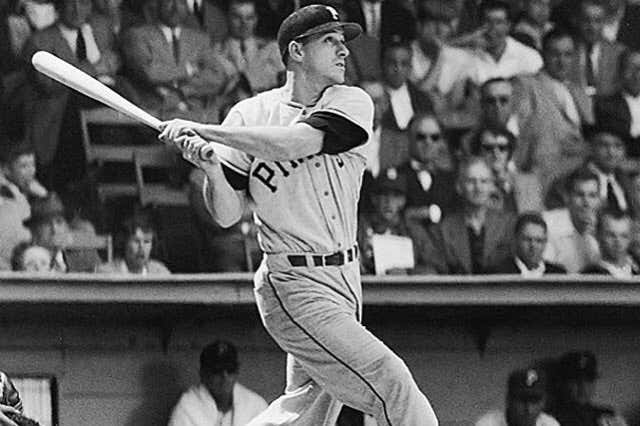 Dale Long of the Pittsburgh Pirates makes history by hitting a home run in his eighth straight games. The eight games top the old mark that was held by five different players. It would take 31 years before Don Mattingly of the New York Yankees matched the eighth-game home run streak. Ken Griffey Jr. of the Seattle Mariners would also have home runs in eight consecutive games in 1993. No player has ever had a longer streak.

Dale Long was born on February 6, 1926, in Springfield, Missouri. A two-sport athlete Long turned down a chance to play for the Green Bay Packers of the NFL, before choosing to play baseball. Dale Long spent six years in the minors with five different organizations, before making his debut with the Pittsburgh Pirates in 1951. He appeared in ten games with Pittsburgh before being picked up on waivers by the St. Louis Browns.

The Pittsburgh Pirates purchased Dale Long’s contract after the 1951 season. The next three seasons saw Long continuing to ride the busses of the minor leagues. A definitive journeyman Dale Long made it back to the big leagues with the Pittsburgh Pirates in 1955. Long played 130 games with Pittsburgh in 1955, hitting 16 home runs, with 79 RBI and .291 average.

Those five players failed to hit a home run in a seventh straight game. Dale Long reached seven games with a home run in the eighth inning against Ben Flowers as the Buccos beat the Phillies 6-2. Returning to Forbes Field, Dale Long made it eight games with a home run with a shot off Carl Erskine of the Brooklyn Dodgers, as the Pirates won 3-2. The streak would end on May 29th as Dale Long went hitless in four at-bats against Don Newcombe as the Dodgers pounded the Pirates 10-1.

Over the eight games, Dale Long had 15 hits in 30 at-bats, batting .500 with nine runs scored, eight home runs and 19 RBI as Pittsburgh won seven of eight games. Long would have a career-best 27 home runs in 1956, making his only All-Star appearance. Following the 1956 season, Long returned to anonymity as he bounced around four teams over his final seven seasons, retiring with the New York Yankees in 1963.