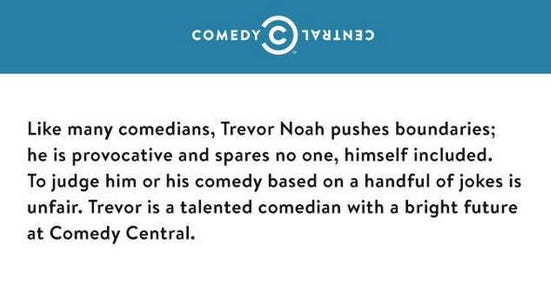 First blog about the OUTRAGE

Good. Thank you baby Jesus. Comedy Central has integrity and stands behind it’s talent and shows 99/100 times. Imagine if they cracked every time someone got mad at South Park? So unsurprising but very pleasant to see that everyone boo hoo’ing over a few jokes on Twitter can go screw. People who take 5 jokes out of thousands and try to label him as some monster are the worst. It doesn’t matter if YOU liked the jokes, they are just Twitter one-liners. Who knows if Noah will be the guy who replaces Jon Stewart for 1 year or 20. But I’m glad Comedy Central has his back over this fake outrage nonsense.