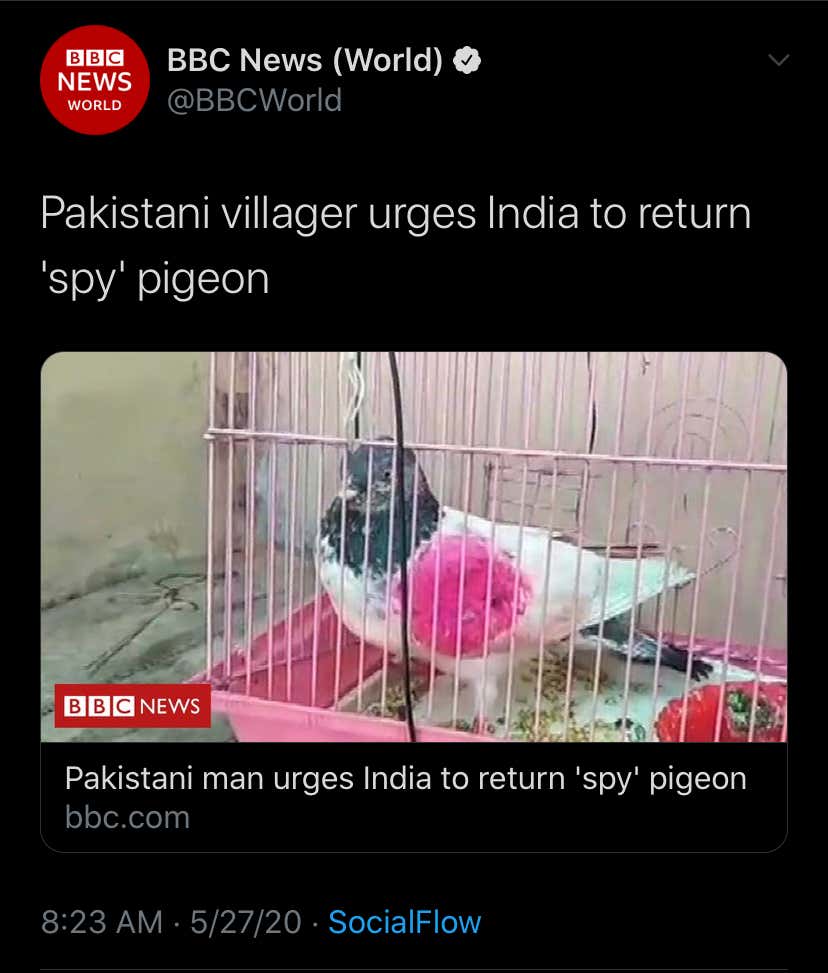 (BBC) - The man, who lives just 4km (2.5 miles) from the border, said he flew his pigeons to celebrate Eid festival.

Police said the pigeon had a ring on one of its legs, inscribed with a code that they were trying to decipher.

The Pakistani villager, who claims the arrested pigeon is his, says the code is actually his mobile phone number.

Mr Habibullah told the paper that his pigeon was a "symbol of peace" and India should "refrain from victimising innocent birds".

Indian villagers captured the bird on Monday along the international border in Jammu and Kashmir and handed it over to the police.

This is not the first time a pigeon flying from Pakistan has landed into trouble in India.

In May 2015, a white pigeon was arrested after it was spotted by a 14-year-old boy in an Indian village close to the border.

And in October 2016, another pigeon was taken into custody after it was found with a note threatening the prime minister.

If I know anything about pigeons, which I do, this feathered fella is about two minutes from breaking and spilling the beans. Government secrets, assassination plans, breaking down that mysterious code he was carrying on his leg. Pigeons aren’t built for this secret spy life. Now an owl? You can trust an owl with your life. Cunning, wise, sharp talons, literally eat and hunt rats for a living. Pigeon? They’ll squawk for a measly crumb! Just like that one in 2016 who quickly gave up the goods about the bounty on the prime minister’s head.

You know these pigeons are frequently up to no good by how quickly the villagers got the federales involved. Every time they see one of these spying bastards invading their turf they’re straight to the jakes. 14-year old boy sees one flying? 9-1-1. The town catches one slipping they corner his ass and bring him downtown for questioning posthaste. And with good reason given their checkered past.  Put this pigeon on trial, in front of a jury of his peers - canaries, blue jays, robins, orioles, birds of that nature - and let him tell his side of the story. Maybe even, idk, try dialing up that secret code and seeing if the phone rings. Every bird deserves his day in court and if it turns out he’s yet another in a long line of spies? Off with his head.