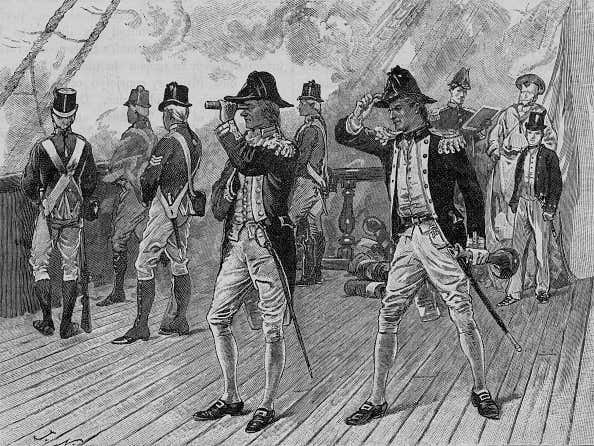 "Turning a blind eye". A VERY common phrase that means to intentionally not notice. Like when, for example, your best friend starts hanging out with some dork from a major television network and she starts to take his side in arguments about your business and you know it's wrong, but you turn a blind eye because she's your friend and you want to keep your podcast in tact even though this new couple are being snakes and potentially ruining everything you worked on. You know, for example.

The phrase itself dates back over 200 years and is usually attributed to the man in the picture at the top of this blog, Horatio Nelson. Vice Admiral, First Viscount, Duke of Bronte, Horatio Nelson to be exact. Big swinging dick in the British Navy during a time when the British were using their Navy to fuck up everyone all over the world. Horatio was tough as nails and fearless. He'd sail full steam into battle with unconventional tactics and score victories for the British all throughout the Napoleonic Wars. He basically invented the blitzkrieg. Charge in, ask questions later. That style came with risks though and it eventually cost him one of his eyes and he got hit with some debris right in the face during at battle when he was 36.

Now this was back in the late 1700s and early 1800s. As a reminder they were sailing ships that looked kind of like this

And when you have a GIANT navy with a fleet that looks like this...

Now we get to the battle of Copenhagen in 1801. The British fleet is going into Battle and they were led by this baby back bitch named Admiral Sir Hyde Parker. He saw what he was up against and started to pee down his leg so he told his ship to signal all the other ships to stand down. Flags waving like crazy to discontinue action right before the battle. A subordinate on Horatio Nelson's ship rushed over to him and told him of the signal coming from Admiral Parker The Pussy and Horatio took the telescope to see for himself. He raised the telescope to his blind eye and said :

He turned his blind eye to the telescope and thus the signal from Parker, raced into battle with his ships, and won a decisive victory for the British because fuck that little bitch, Parker. Parker actually got demoted as a result of his actions in this battle and Horatio Nelson was named commander in chief after the battle.

This legend is why we use the phrase "turned a blind eye" to this day. Have a good day.