If you want to skip all of this kids mesmerizing high school highlights and skip forward to the ending, here is Jim Harbaugh, defensive coordinator Dom Brown, and linebackers coach Brian Jean-Mary literally jumping for joy over his signing. They did cartwheels. Cartwheels! 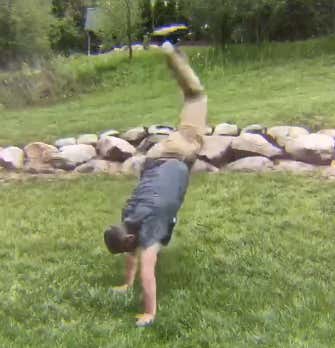 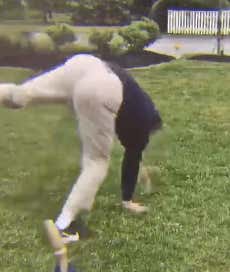 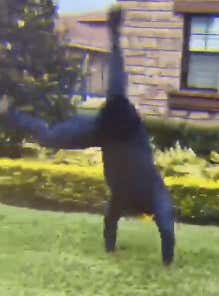 I have officially seen it all.

Look, nothing against the kid in the video. Great for him to get his college paid for. And he obviously has to be a pretty good player to sign with a Division 1 program, even if it is a middle of the pack one. I'm not laughing at anything the kid did here, but I'm howling at how dumb Jim Harbaugh and his staff are. Cartwheels??????

This kid is a 4-star recruit with a .8981 composite on 247. That would rank......hold on let me scroll down.....a little farther.....almost there.......16th on Ohio State's commitment list. Cartwheels???? I'm laughing out loud thinking about how far the mighty have fallen. Bo Schembechler must be rolling over in his grave.

I mean, I get the weird stuff Harbaugh does in recruiting, I guess. The shirtless game of touch football and sleepovers were weird though. But when you need to beg players to come to your school, you gotta do anything it takes to bring a player home. But to celebrate like this when he does bring one home?? They're acting like they just signed Justin Fields or Chase Young. Good for the kid, but he wouldn't even be a top 15 recruit THIS YEAR for Ohio State. Cartwheels? Just one week after saying his happiness is controlled by beating the Buckeyes?

Listen Jimmy, you're going to be an angry little elf for a long, long time if that's what you're using as your measuring stick. Everyone knows that the key to winning in college football is recruiting, and if you're doing cartwheels because you got the 48th best player in his home state........you're not recruiting well enough.