In the video, a woman being interviewed was abruptly interrupted by a stranger who kissed her without permission.

“Sorry to interrupt,” said the man, wearing a tie-dyed shirt and yellow bandana wrapped around his head, before kissing the woman while the camera continued to roll.

“No, I met him for a second with my dog, that’s insane,” the woman said moments later.

The reporter asks her if she is okay with the “spontaneous kiss.” The woman tells the man to “text me” as she walks away. ...

The man, Jack Ring, told the Toronto Sun Friday he’s been getting a lot of comments that his actions were sexual assault.

A while back I listened to a Conan O'Brien podcast with Canadian Mike Myers, who made the point that Canada is the most secretly passive/aggressive country on Earth. His point being that they've managed to produce comic geniuses like John Candy, Jim Carrey, Martin Short, half the cast of SNL, Kids in the Hall, (I'll also add Mike Myers) and so on. While at the same time inventing the hockey fight and then penalizing the guy who gets his jersey pulled over his head for not having his fighting strap buckled. And I immediately thought of that as I read this.

Canada's largest media outlet issuing a grave, extremely serious apology for airing a kiss between consenting adults who were both happy with the results because it was "non-consensual" is about as Canadian as it gets. It's passive/aggressiveness mixed with a desperate need to come across as nice and concerned about a crime where there literally no victim. No one is complaining. Both parties involved are glad it worked out the way it did. Appear to want more of the same. And yet in a voice that you'd expect them to teach in news anchor school to used in case you just showed live footage of a bunch of hostages getting shot in the temple, this guy calls it "simply unacceptable and offensive."

Seriously? Go back and watch the video. Right at about this part, post kiss: 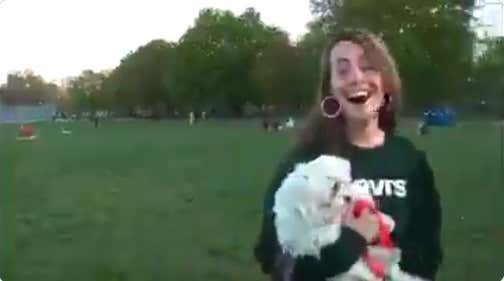 To go with the Barstool headline I almost used: "Does this look like the face of a woman who thinks the kiss she just got was simply unacceptable and offensive?" Based on her reaction, I'd say she was very much accepting of that unacceptable mack. In fact, I'm pretty sure that as she snort-laughed, she ovulated too. This is the exchange verbatim:

Do I think it's a wise idea to go around sticking your tongue in the mouth of a girl you just met in the park a few minutes ago? No, I do not. I would recommend to my own sons and anyone who asked for my advice that they not engage in that behavior, epidemic or otherwise. Do not try this at home, kids. Have I ever done it it? Not on your life. I'm not a tall, swarthy dreamboat who looks like a Canadian Vince Chase like this guy. Even when I wasn't a middle aged man who looks like Waylon Smithers, a move like that was way out of my reach.

But did it work out for him? Abso-damn-lutely. It's a real life version of that Tom Brady SNL skit about Sexual Harassment where the three rules are: "Be handsome. Be attractive. Don't be unattractive." In CFL terms, it was 3rd down & long and rather than punt, he threw up a Hail Mary and she caught it for a 120 yard score. It was a bold strategy, Cotton. And an unqualified success. He walked away with her digits, she's standing in a puddle and asking him for more. If there was ever a situation that did not call for a solemn apology, this is it. Because if anyone is offended by an actual consensual makeout sesh just because the guy didn't get it in writing ahead of time, they're the ones who need to apologize, just for being judgmental dicks. And CTV should apologize to the rest of us for their apology.