To those who aren't Celtics fans, I'm not sure you understand why May 25th 2002 was such a huge deal, so allow me to explain. For starters, that 2001-02 season was the first time we saw this team play in the postseason since 1994-95 in which they lost in the first round. If you're like me and grew up in the 90s, all you knew was how dogshit the Celtics were. Year after year they were bad, I mean really really bad. From 1993 to that 2001 season they never won more than 36 games and had two seasons in the teens. You may remember this as the Rick Pitino era, when that son of a bitch set this franchise back decades because he's a spineless asshole. So that first full season under Jim O'Brien was not just a breath of fresh air, but the first time we saw a Celtics team basically in my lifetime not suck balls. They would go on to win 49 games that year, the most they'd win since the 1991 season. Sure, there was the whole trading a young Joe Johnson thing in February for Tony Delk and Rodney Rodgers because Tony Delk scored 50 that one time, but other than that it was a great year.

A 25 year old Antoine and a 24 year old Pierce were at the height of their powers. Together they averaged 48 a game and were legit franchise players. This roster had some of my favorite role players of all time like Eric Williams, Walter McCarty, and Kenny Anderson. Remember Kedrick Brown? Guy could dunk like crazy and otherwise was useless but we loved him anyway. They had the 8th best record in the league, the 5th best defense, were 1st in 3PM and 3PA (duh...see Toine). What a fun group after years and years of dogshit

Enter the playoffs. They got through the Sixers in the first round (shocker!), took down the Pistons in 5 in the second, and were matched up with the 52 win Nets in the ECF. Things were split after the Celts had gone into NJ and stolen Game 2. Well things quickly went to shit in Game 3 at the Garden. Down 15 after the first quarter and 20 at the half, it was ugly. The lead ballooned to 26 at one point. You may remember at the end of the third quarter with this team down 21, Antoine Walker had his famous eruption on the Celtics bench. What happened next?

Pierce woke up big time. He had 19 points in that fourth quarter on 6-7 shooting, Kenny Anderson was a perfect 3-3, and the next thing you knew this team was pulling off one of the greatest comebacks in NBA history. Look at some of the images from that night, I can say with certainty that it was the best moment of my Celtics fandom at the time. A 15 year old Greenie was over the goddamn moon 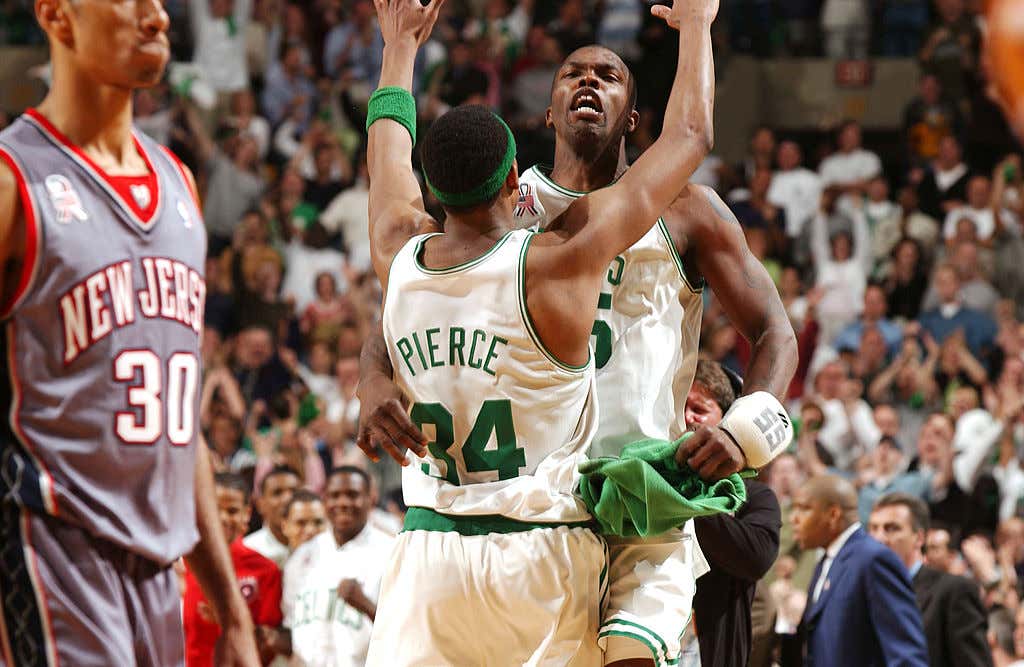 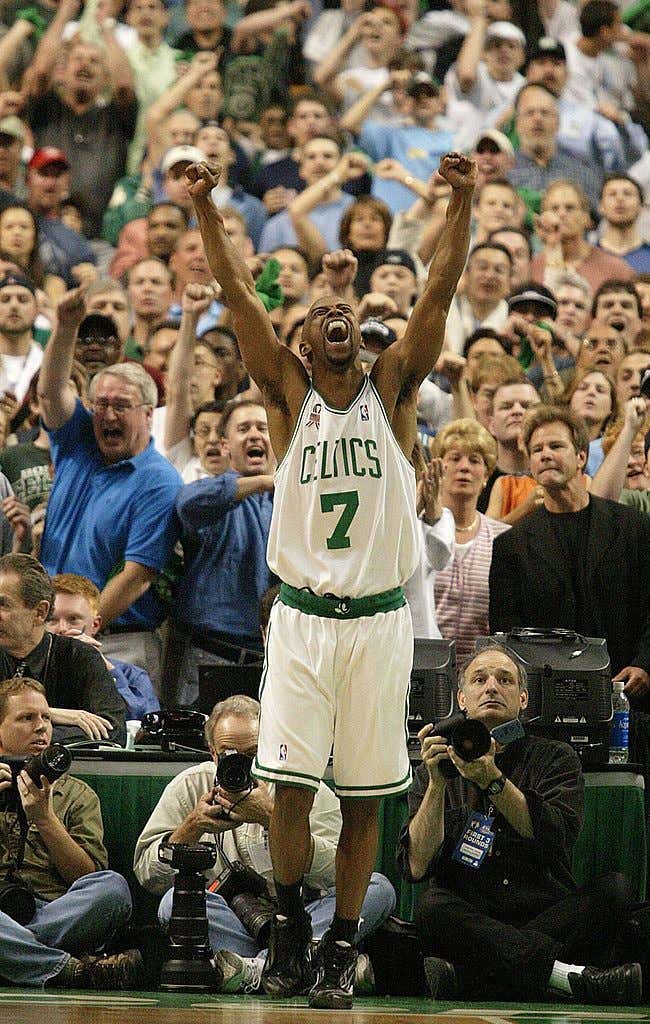 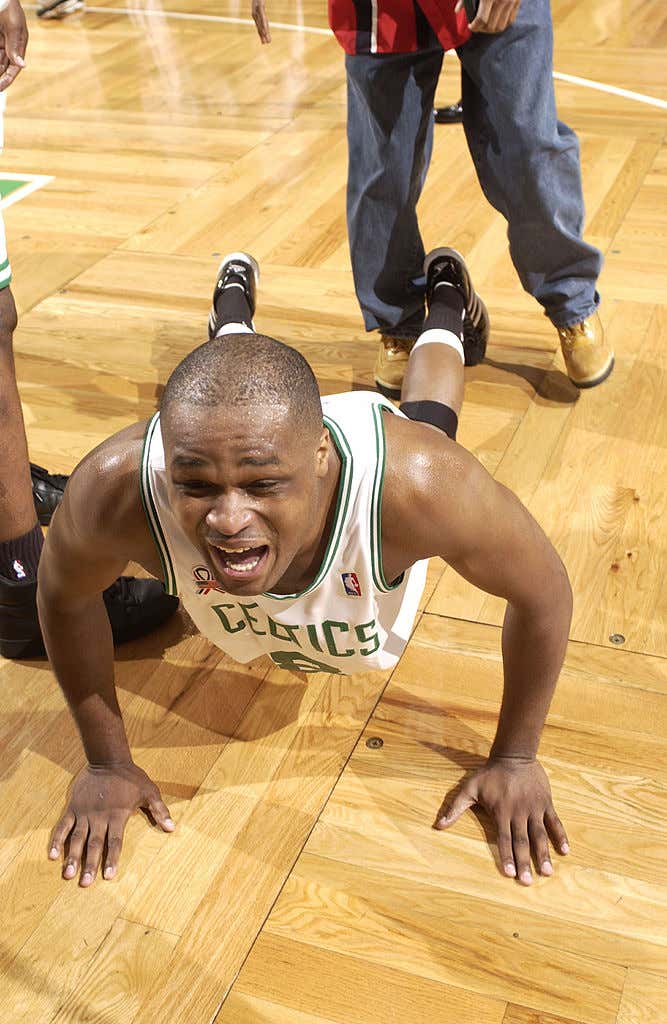 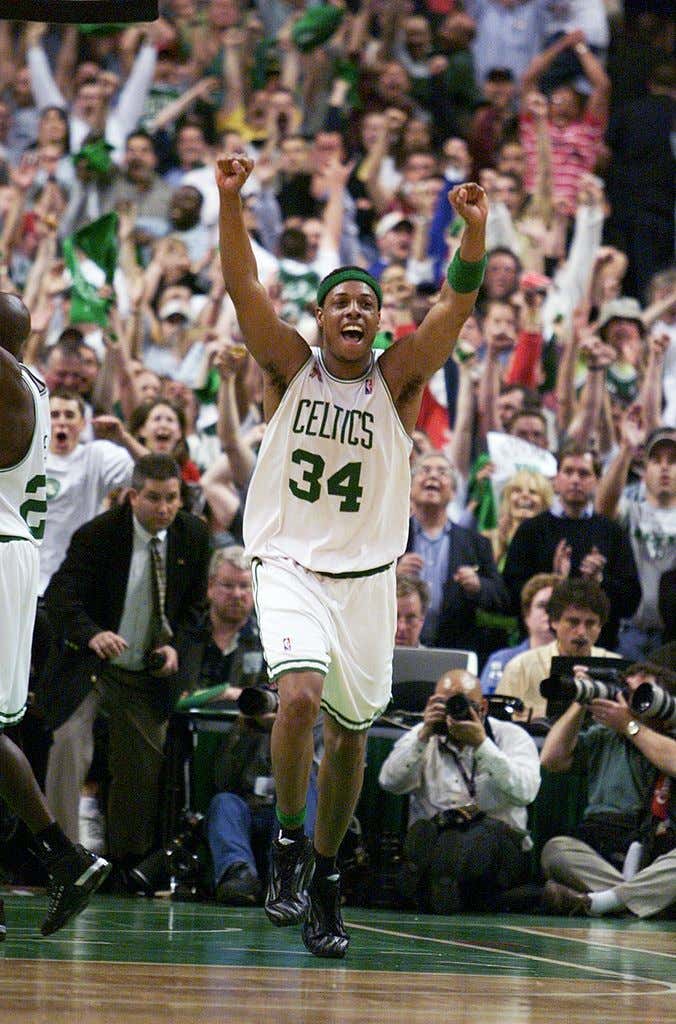 Now, the positive vibes were short lived seeing as how they then dropped Game 4 by 2 points in what was a gigantic kick to the dick. Then they lost both Games 5 & 6 to lose the series and I'll admit, dropping 2 of the 3 at home and nearly dropping all three wasn't exactly ideal. I'll forever believe that team was a piece away from winning the whole thing. Who cares if they had to play the big bad Lakers in the Finals, they would have figured it out.

That game would be the best Celtics playoff moment we would witness for quite some time, until another epic comeback you might remember

that year ended up being alright I suppose, if you're into the whole winning a title thing.

But I'll never forget May 25, 2002 and the joy it brought. To this day I still need to know what Antoine said in that huddle that changed everything. Just add it to the list of why he's an all time Celtic. Without him, that comeback never happens.