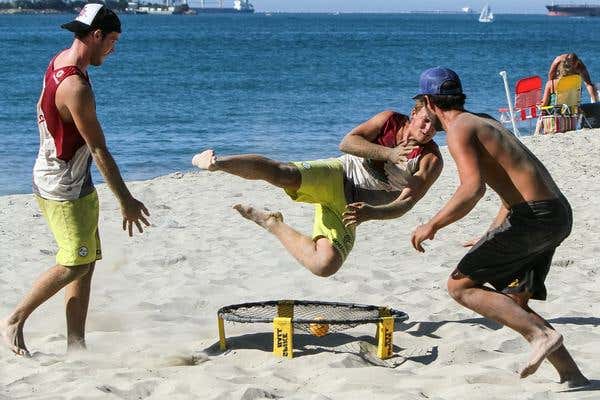 The past few months have been rough, there's no denying that. But there seems to be a slight tinge of hope in the air these days. It feels like we're getting closer and closer to some shred of normalcy. The beaches have opened back up, people aren't afraid to hang out with a small group of friends, and now we finally made it to Memorial Day Weekend. Which means that Summer is officially here, quarantine or not.

It's for sure not going to be like any other summer we've experienced in our lifetimes, but we can try to pretend. So hopefully every weekend from here on out consists of the beach, some beers, BBQs, and dominating the shit out of everybody you come across in some backyard games. Personally I am of the belief that lawn games are always better whilst played on the beach. But if you don't live near a beach then I suppose the yard will do the trick. I'd be lying, though, if I said they didn't hit different with that salty ocean breeze in the air. Either way, it’s a time to kick back and relax for some. For others, it’s time for that competitive streak to kick in and show everyone else that you are the king and everybody else is your bitch. Now while all lawn games are created equally, that doesn’t mean that some are just blatantly better than others. So in the spirit of MDW, it’s time to power rank these bad boys.

I don’t understand how people actually like this game. It’s impossible to play, nobody has ever had any fun, it’s annoying as hell when the washers always bounce straight out of the box on every toss. And then you're playing on the beach, stuck digging through the sand trying to find the washers for 5 minutes every round. If you're playing at a tailgate in a parking lot, the washers roll like 150 yards away from you and it's just a terrible experience all around. Fuck washers.

I’m sure that there are plenty of Bocce enthusiasts out there but this game just doesn’t do it for me. I think what it’s missing the most is that competitive nature. You don’t really talk shit when you’re playing Bocce Ball. It’s more of a gentleman’s game, which is totally fine and everything but it’s just not my cup of tea. I need some fire and some passion in my beach games. I need things to start to get ugly and friendships to be lost. That’s not what Bocce brings to the table.

Fun game that is easy to play, easy to set up and doesn’t take up a ton of space. Definitely not the best but farrrrrr from the worst. Quick Sidenote: the over hand toss is the way to go in Ladder Ball. Sure, you may end up looking like a dick but it works. Winners always find a way to win.

Unless you’re playing against someone like this who is the Randy Johnson of wiffle ball pitching, it doesn’t get much better than this. Very few feelings are as rewarding as crushing a dinger in front of the entire BBQ. For one brief moment of your life, you’ve actually done something that you can be proud about and for once, not everybody hates you. It’s glorious. The one problem with Wiffle Ball though is that you need at least 3 people on a team in order for anyone to care. 4 is preferred. Sometimes you just don’t have that many people that want to play. It happens.

Out of all the games out there, I think Kan Jam has the biggest swing in terms of either being the best time of your life or being one of the most frustrating days of your life. Some days the disc is working for you. The wind is calm, the shots are dropping, everybody is having a good time. But other days you just don't have the touch anymore. Maybe the wind picked up and you can't figure it out. Maybe you just fucking suck and every deflection you make ends up 10 feet away from the Kan. I love the game, don't get me wrong. But it's at stuck at number 5 just because it can become so rage inducing at times.

I wanted to make Horseshoes #1 on this list because it’s one of the originals and deserves the recognition. But all great things must come to an end at some point. There's always something or someone new ready to knock the king off the throne. And I think horseshoes has been dethroned for a while now. It is rapidly declining in popularity just hasn't made any adjustments to keep up with the times. So as much as I love horseshoes and respect it as an OG, it's sitting right outside of my top 3 and I think that's where it'll remain for the rest of time.

Beersbee is easily the most dangerous out of all the games. If you're not careful, you could end up catching a frisbee to the neck at full speed, or a bottle to the face. And that element of danger only serves to make the game that much more epic. There's a quality amount of adrenaline packed with this one. And that's why I have it ahead of Kan Jam as far as disc games are concerned. There's also a little more skill involved as well, I feel like. You've got a smaller target to hit offensively. And then on defense, you've gotta have active hands and awareness to make those catches. It's an athlete's drinking game.

Beersbee might be the most dangerous of the games but Spikeball is far and away the most intense out of the bunch. So intense and action packed that I'd say Spikeball is almost crossing over the line of being a legitimate sport instead of just a game. No gas, that clip right there is one of the most athletic plays I've seen across any sport in a long ass while.

The only reason why it's not #1 on the list, however, is precisely for that reason. Because sometimes the game is just a little too intense to take over that top spot. Sometimes you just want to chill out a little with a beer in the hot summer's sun whilst playing your beach/backyard games. You don't always want to be running and diving around like a maniac, sweating up a storm and then your clothes are ruined for the rest of the day. Don't get me wrong--it's totally worth it every time if you win. But if you're at the BBQ grossing everybody out with a shirt drenched in sweat AND you're a loser on top of it all? Tough scene to say the least.

Cornhole is still the most perfect game ever created. It’s simple enough that anyone can play it so you can get a girl on your team and try to work that game to your advantage. But you can also get really nasty at Cornhole and then it gets pretty damn competitive. But unlike Spikeball and Wiffle Ball and some other games, you can still hold on to your drink the entire time. And as long as you have the boards and some bags, you can play it anywhere. No need to hammer down any spikes anywhere. The backyard, the beach, the parking lot. So unless someone tells me that croquet is the greatest game ever and I’m just a total idiot for missing out on it, Cornhole is your lawn game champion for now and forever.