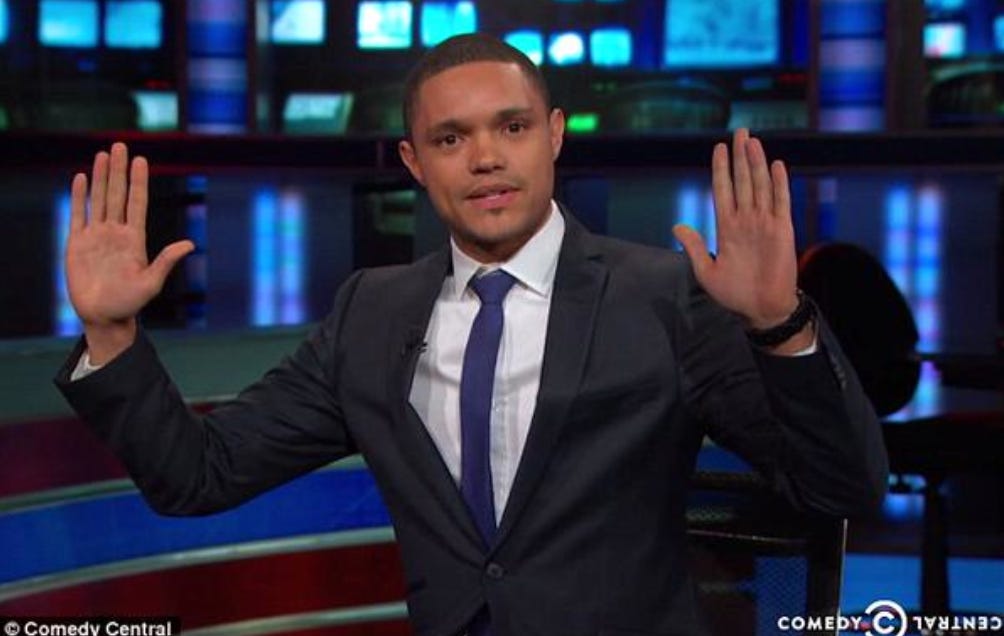 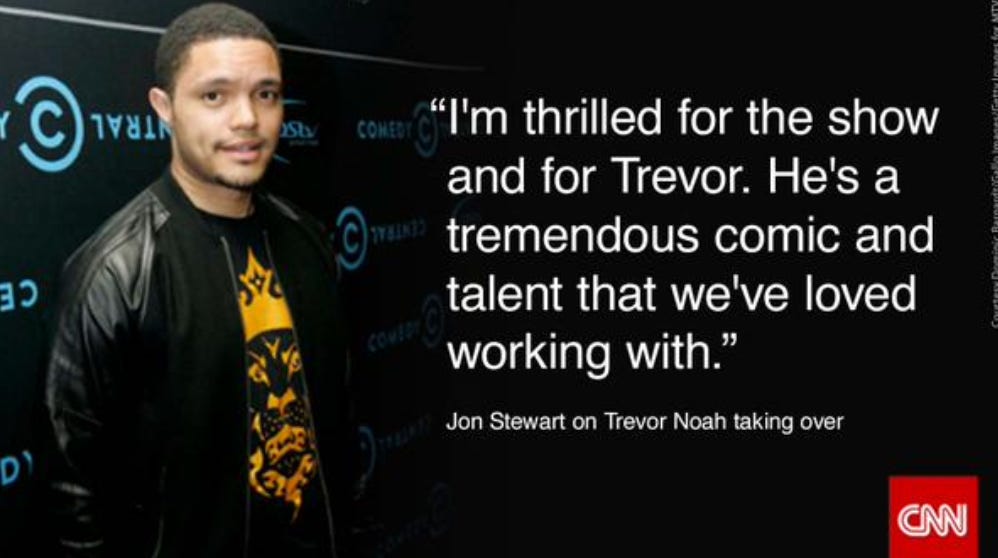 Daily Mail- He joined The Daily Show as a correspondent only three months ago and now he’s been confirmed as Jon Stewart’s replacement. Meet Trevor Noah, the 31-year-old South African comic who Comedy Central hopes viewers will one day know and love as much as they do Stewart. The official announcement of Noah’s ‘huge and unexpected promotion’ is set for Monday night, reports the New York Times. Comedy Central’s efforts to select a replacement for Stewart – who has hosted the satirical news show for a staggering 16 years – had gained speed in recent days. Last month, shortly after Stewart revealed his plans to step down from his role, company executive Doug Herzog confirmed that a ‘short list’ of possible replacements had already been put together.  He added that the channel and Stewart were consulting on when he will depart his job, as well as discussing whether he will have continue to have a role with the show he has hosted since 1999. If Noah – who is no stranger to tackling controversial issues on-air – replaces Stewart on The Daily Show this year, he will be joining a primarily white, male and straight late night show landscape. At present, Comedy Central is the only network to have an African-American host: Larry Wilmore, A network spokesman declined to tell Variety whether Noah was being considered for Stewart’s job.

Well alright then!  That happened faster than I thought it would.  We have Jon Stewart’s Daily Show replacement and his name is Trevor Noah.  Kind of a surprising pick but not a totally surprising pick.  It’s surprising because Noah has been a Daily Show correspondent for about three months.  His pieces have been really good it’s just that he hasn’t been around all that long.  It’s not surprising because you had to figure, if they were going to pick a replacement at all, they were going to pull from in-house despite all of the names we heard after Stewart’s announcement in February that he was leaving.  We heard pretty much every comedians name listed to replace Stewart’s spot at the desk.  Names like Tina Fey or Amy Poehler were thrown around despite the fact that they would never ever take that job at this point in their careers.  It was more likely to be someone who had been around the show and knew the inner workings of it.  Like Samantha Bee, Jason Jones, Aasif Madvi, Kristen Schaal, John Hodgman, Michael Che, etc.  I thought it was going to be Jessica Williams but she denied interest early in the replacement search.  But nope!  It’s Trevor Noah.  The 31-year-old Daily Show correspondent from South Africa.

I like Noah.  I like him a lot.  The pieces he’s done in his short time at the show have been enjoyable.  He’s young and confident and funny. The crowds seem to like him.  He’s apparently a huge deal in South Africa which I didn’t know before today.  I will say this though (and I would’ve said this even if they had hired the most qualified candidate in the world), Noah’s got GIANT shoes to fill.  GIANT.  He knows that.  Everybody knows that.  That’s why everybody’s so goddamn nervous about Stewart stepping down.  You don’t just replace Jon Stewart.  You can’t.  The guy is an icon.  He took the Daily Show from Craig Kilborn in 1999 and built it into a juggernaut.  Now it’s Trevor Noah’s turn to…….just keep this thing afloat I guess?  I don’t really know.  Noah needs to try and be the next Trevor Noah and not try and be the next Jon Stewart because that’s impossible.  As a huge fan of the show I’m both excited and nervous to see where Noah takes it.  Good luck sir.

PS- It makes me sad that there’s now a replacement in place.  It makes the end of Jon Stewart’s time behind the desk seem even more real.  Sad face emoji.