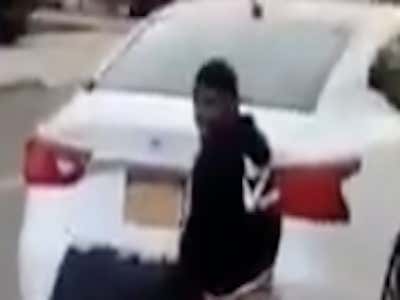 Hey Cuomo, fuck your Phase 1, your Phase 2, all the way to Phase 10 or whatever the last phase is. I want New York City completely reopened by Tuesday morning. Everyone should enjoy their last breath of Working From Home during this half baked Memorial Day Weekend and then it's back to business on the 26th (Summer hours obviously apply since we are in the glorious period between MDW and Labor Day). No city on the planet has shown the resolve to stand up to coronavirus and transition from the new normal back to the old normal better than New Yorkers, even if Air Bone In appeared to have lost one of Cuomo's prerequisites during his little tryst.

Nonetheless, there is no denying the unbelievable progress the Big Apple has made in just the last 48 hours.

On Wednesday I blogged about people fucking in the subway once again being a sign the city was recovering:

On Thursday I blogged about people making love in public park's under the guise of night once again which signaled we were almost back:

And now we have people getting it in while the sun is on the clock in the most highly trafficked spot of a street without a care in the world. If that isn't a sign that the city has fully healed, I don't know what is. I know this phrase gets thrown around a lot, but the six heroes I blogged about exchanging air and bodily fluids in public during a global pendemic is the epitome of #NewYorkStrong.

Did I think I would be blogging a romantic trilogy about public fucking being the symbol that allows New York to spring back into its normal way of life? Of course not. But I am also not even a little bit surprised it happened. Now if you will excuse me, I am going to go wash my eyeballs out with bleach and try to find another beat to cover.