Today, there were a few "independent NFL insiders" leaking that Dallas had offered Dak Prescott a 5-year $175 million dollar deal and that he replied that nah, he wants $45 million in that 5th year.

Immediately real insiders, and I don't mean Leroy (shout out to Leroy), refuted this. The truth is Dak isn't going to accept a deal longer than 4-years. He wants to go into 2024, at 31 years old, in the prime of his career and get a second 4 or 5-year contract.

Now, you can say you don't think Dak is worth [enter whatever amount you think, based on who you root for] amount of money, or that you don't think he's a Top-10 QB, but really none of that is relevant right now. What is relevant, is that Dak has ALL the leverage, and The Cowboys lose theirs with each passing day.

Let me break this down for you.

Well, let's just say Dak doesn't accept the 5-year deal. That means Dak will play on his franchise tag (again) at $31 million for the year, which might I add he is very happy to do.

Kirk Cousins (no stranger to multiple tags himself) communicated that Dak shouldn't fear playing under the tag, he should feel that "the tag is Dak's friend". Kirk talked about just this on ESPN and Pro Football Talk.

"So my message to Dak, when I saw him midseason last year, was, 'Hey, whatever happens, don't be afraid of the tag. It can be your friend, and you can use it to your advantage.'"

Ok, so now what happens. Dak plays for the year under the tag, with a STACKED cast of weapons. Not only will Zeke continue to take the pressure off of Dak, he now will get to throw to CeeDee Lamb instead of Randall Cobb, along with Michael Gallup and Amari Cooper. You thought last year's numbers were ridiculous??? The 2020 season is going to be even better.

And ... and I can't stress this enough. He will be doing it without Jason Garrett basically trying to drive the bus with his foot on the brakes the entire time.

All of this will raise his value even more heading into his contract year.

Don't believe me? He's projected to be a Top-5 fantasy QB this year and Vegas just put him in the top echelon for winning MVP. This screenshot was taken this morning from Odd Sharks. 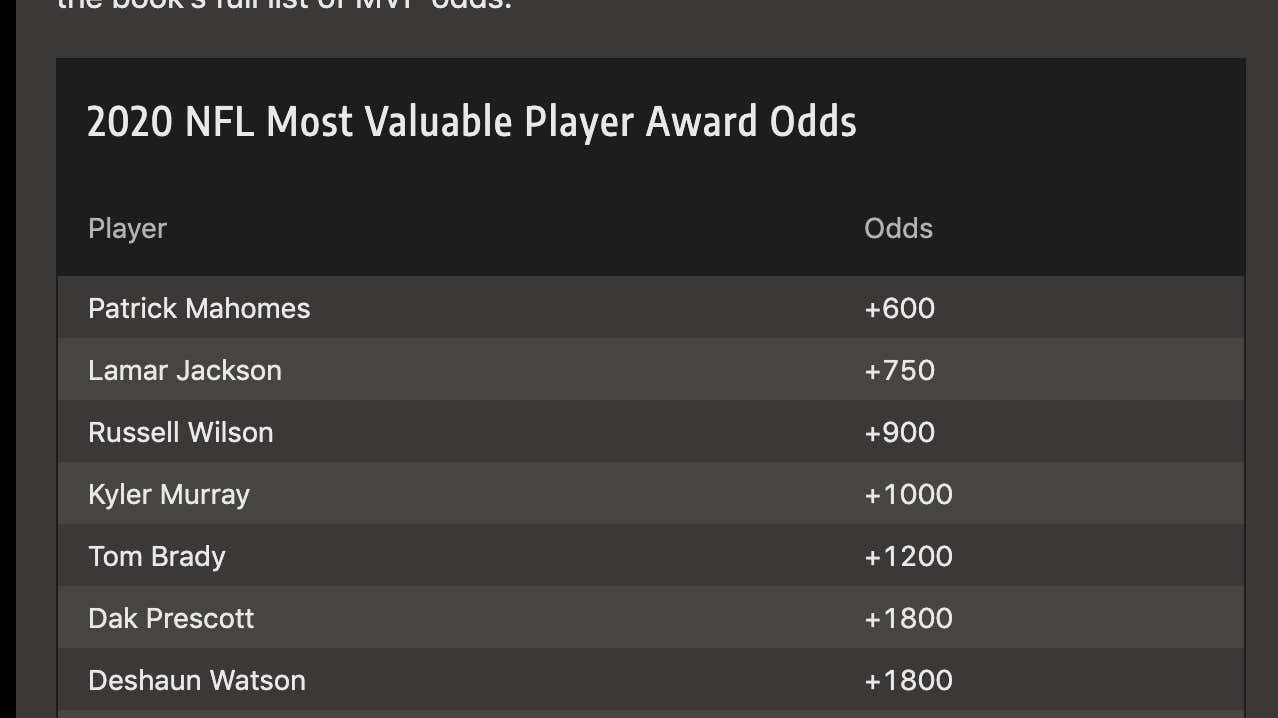 So if the Cowboys make the playoffs with Mike McCarthy at the helm and Dak puts up insane numbers due to Kellen Moore's second year running an offense with more toys than I have in my nightstand?

Well, next offseason will be when the NFL renegotiates with the broadcasters. They will say, "listen, we have 17 games for you now plus another 2 playoff games (2 vs 7 wild card)", so you're going to need to back up the Brinks truck."

And NBC, Fox, CBS will all do just that. With that new TV money, that means players will get to demand more when the salary cap inevitably raises from the new rights deals.

Now, Dak will come back to the table for his 4-year deal, but instead of $35 million a year, maybe now he has the leverage for $38 million a year, which if you do the math adding the franchise number plus the new 4 year deal, averaging out across the five years, ((31+ 38*4)/5) his average yearly salary now breaks down to 36.6MM a year, effectively costing the franchise an extra $1.6 million more per year for the same player, just because you wouldn't allow him to sign a 4-year deal to begin with.

Congratulations, you played yourself.

Now, people might wonder why Dak (more likely his agent Todd France) is so adamant about signing a 4-year deal, to begin with. Why wouldn't he want to lock himself up for as long as possible?

He knows the salary pie is going to continue to expand. In 2024, when that 4-year deal is up, as I stated earlier, he'll be in the prime of his career. This is the beautiful inflection point where the mental and physical line up in synchrony. 4 years from now? Who knows? Maybe the salary cap will be so high that its normal to see an average deal size of $41 million a year maybe higher?

So he wants to keep the flexibility to ensure that when that time comes, he's able to cash in for another 4-year deal in his 30s.

Shit, pretty savvy thinking if you ask me.

On top of every bit of leverage that he will gain by playing again on another prove-it deal, there is another element in play as well.

We all know Mahomes is getting close to an extension. It very much looks like he'll sign for upwards of $200 million and Watson's deal won't be far behind him. And as soon as Mahomes or Watson sign extensions, just like that, the market goes up.

Thus, every day that passes by, gives more leverage to Dak.

No matter how good at business Jerry Jones is known to be, don't sleep, he actually has a record of being a TERRIBLE -- NO, GOD AWFUL -- negotiator. Whether it's his contract he did with Dez, the way he handled Zeke, shit, even how things went with Emmitt Smith back in the day, Jerry consistently fucks up when it comes to handling his players and their contracts.

He talks about how much he values the player in public and tries to strong-arm in private until he inevitably cracks, often for sometimes more money than the player initially was going to sign for, to begin with.

If I was the Cowboys, I would get this deal done ASAP rocky. Give the man his 4-year deal and be done with it.

But if history can give me any indication of what's to come, that's NOT what's going to happen. Mark my words, Jerry will find some way to fuck this up and Dak will end up getting a BOATLOAD more than he's willing to sign for right now.