It was my favorite Rundown topic we've ever talked about. On The Rundown Tuesday, we all discussed the clip of Dusty Rhodes hitting a three-pointer that went semi-viral earlier this week. It's the best Twitter video of 2020.

If you've been following my story for any amount of time, you know several things about me. You know that I am a bad gambler. You know that I am a sensitive child on Twitter. And you know that I love banana pudding. And some of you probably know I'm a big wrestling fan, particularly an old school fan. My favorite era of wrestling is from 1988-92 and while I was a WWF kid to my core, I also enjoyed NWA/WCW in the special times I got to see it, which was when we'd go to my grandmother's house in Decatur, Alabama twice a year so I could enjoy her cable TV. I didn't get cable TV until 1994.

Anyway, as soon as I saw the Dusty clip, I was fascinated. I wanted to know the entire roster of the NWA team. I guessed, based on who I saw - Dusty, Lex Luger, Sting - that it was around 1988. I wondered where Ric Flair was, and Barry Windham. Well, thanks to an anonymous emailer named Danny who slid into my gmail Wednesday night, the full video has been found. And I love it so damn much.

So calling it the full game is a bit of a stretch. It's a 39-minute video beginning sometime in the third quarter. And it runs right through the thrilling finish of a 1-point game. The teams are the stars of the NWA around the Jim Crockett Mid-Atlantic Promotion in Charlotte against police officers from the Charlotte area.

Sting is here, and he's the best player on the court. He's the only person on either team that seems to possess an actual basketball move in his body. A couple of times, he looks legit. As far as I can tell, Sting is the leading scorer for the wrestlers even though it's fucked up that he didn't wear face paint.

Lex Luger is here. And he's the best glue guy I've ever seen. He can be seen in the Dusty video above crashing the boards but he seriously might have had 30 rebounds in this game. The cops were terrified of him. He did it all - rebounded, played D, did everything so his teammates could soar. He was the Total Package. 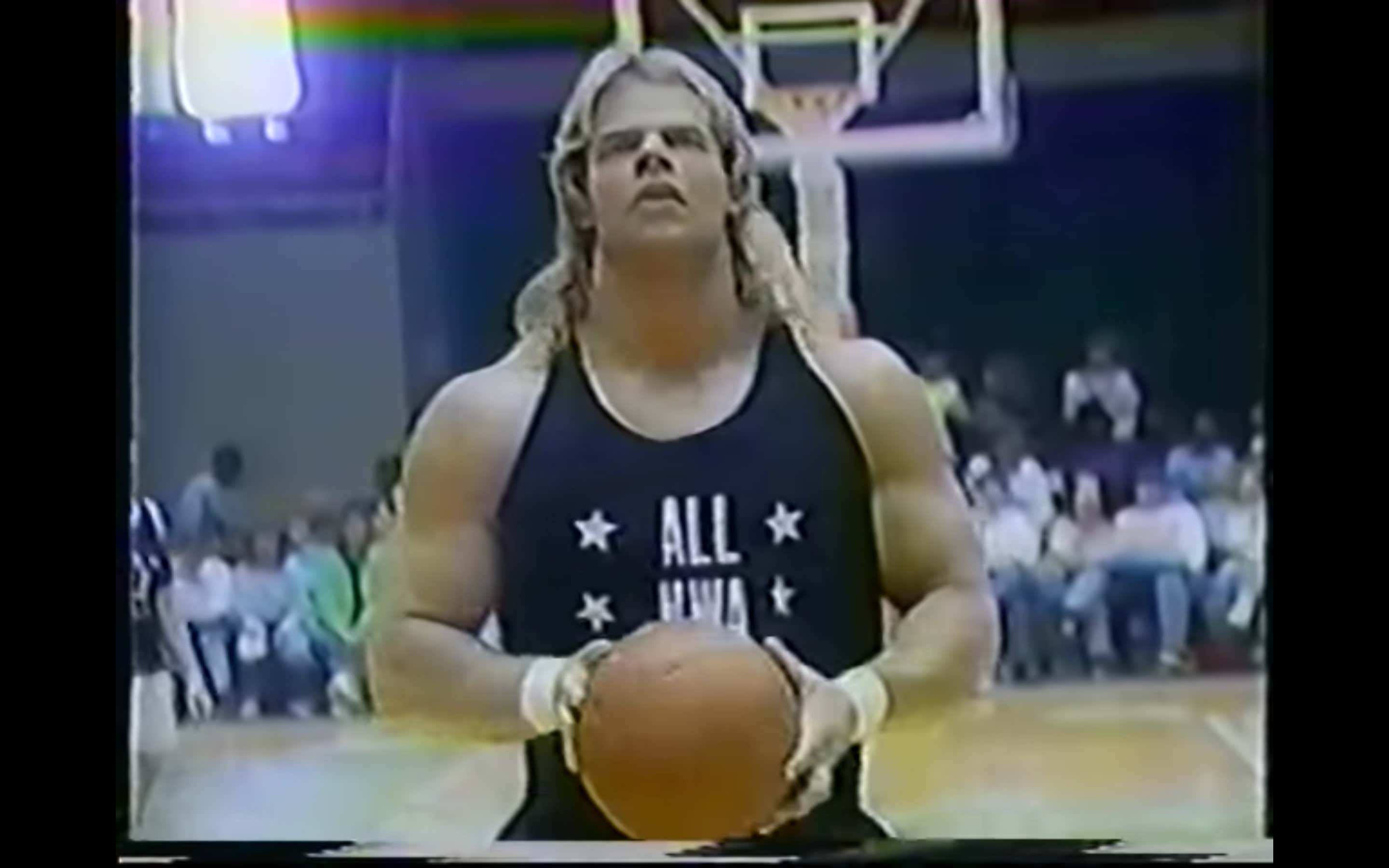 The jerseys are fire, I know. The only guy that makes this outfit look better than Luger is Barry Windham, the most 80's motherfucker that ever lived. 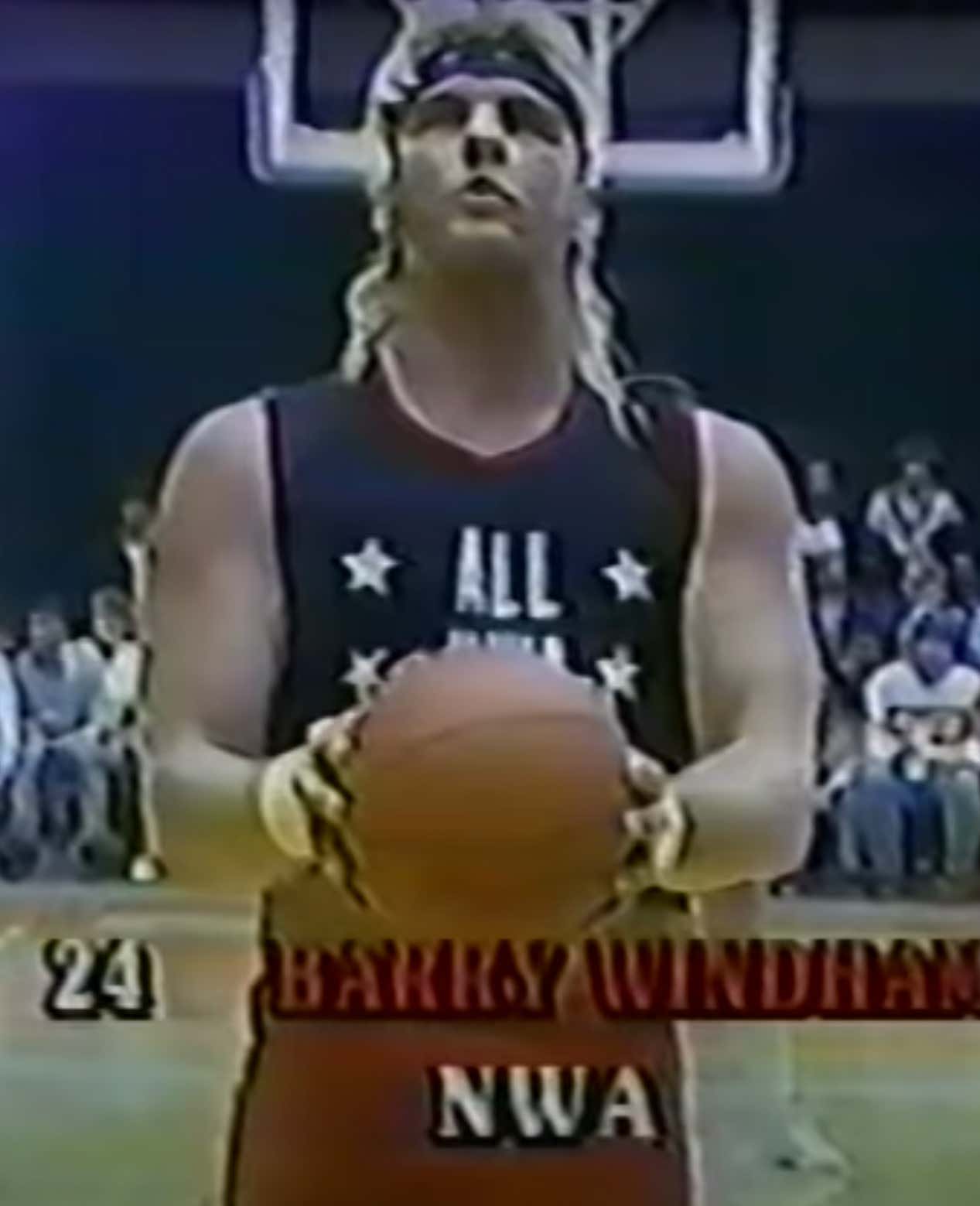 So long story short, the massive crowd of 75 people actually got pissed every time the police made a play. And the police actually had a lead late in the game but Sting and Dusty Rhodes wouldn't let their team fake lose. Sting fed Dusty on the "fast" break in the final seconds, and Dusty hit a layup with 12 seconds left to give the wrestlers a 55-54 win. 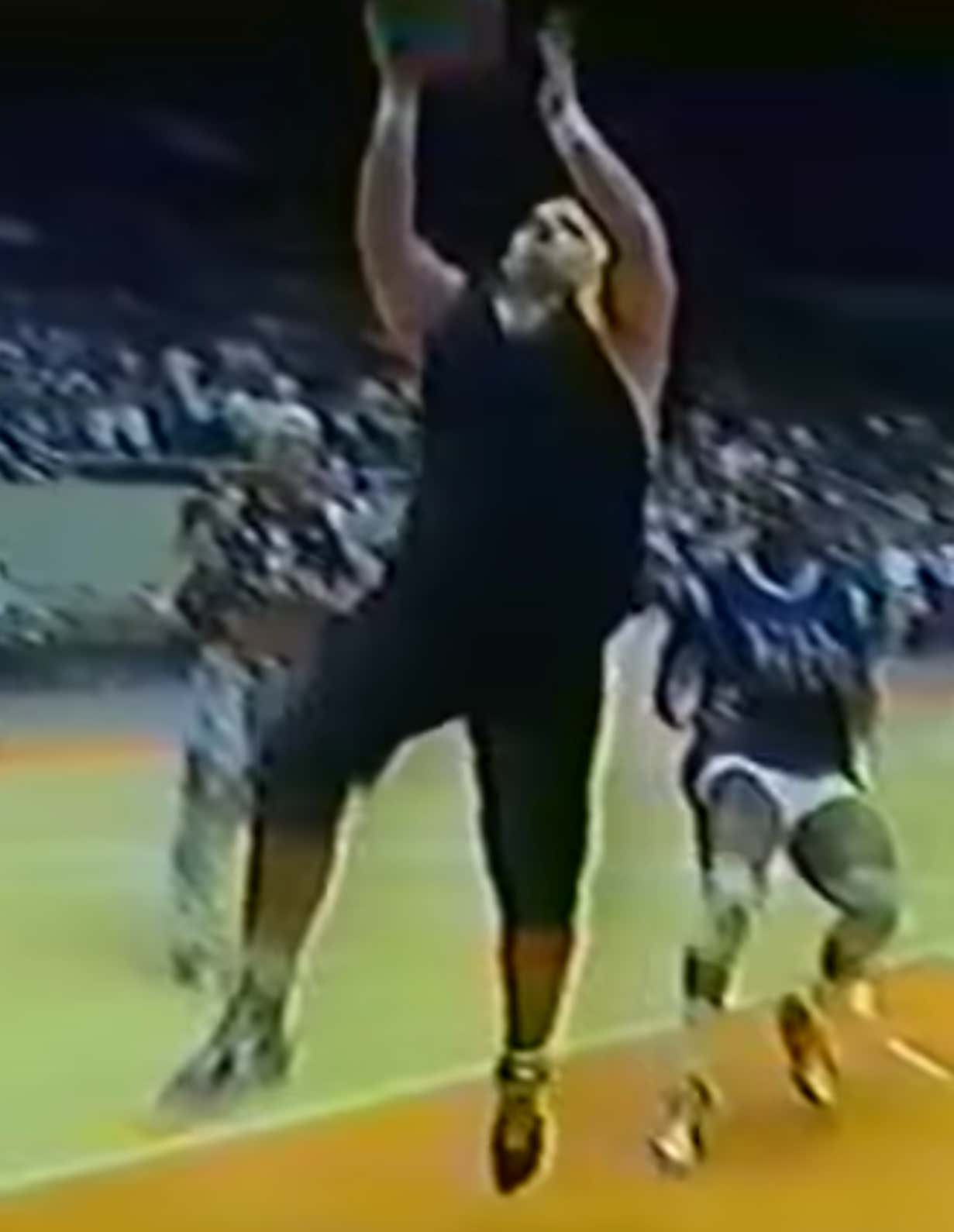 By the way, that's not a grainy photo. That's just what Dusty Rhodes looked like when he jumped. Also seen in the game but not here is Road Warrior Hawk, who wore a bandana and looked like the scariest man imaginable. Flair was nowhere in sight, probably because he was somewhere making money for the company.

Anyway, I fucking loved this entire video and I encourage you to send me any old videos you find of pro wrestlers doing something that isn't pro wrestling.