The biggest gripes that FiveThirtyEight has with Jones as a HOFer are that he:

First, if he's going to be knocked for falling off sooner than other Hall of Famers then does he get credit for contributing sooner than other Hall of Famers? At 19, he was getting his feet wet for a 96 win team that lost in the World Series. At 20, he played in 153 games for a team that won 101 games. At 21, he was hitting 31 home runs and winning Gold Gloves for a 106 win team.

According to wins above replacement,1 only 24 position players since 1901 were better through their age-30 seasons than Jones, whose resume by then already included four 7-WAR seasons — the same number as Rickey Henderson, Ken Griffey Jr., Frank Robinson and Joe DiMaggio.

Griffey got his start at 19 like Jones, but for a team that didn't break .500 until he was 23. Robinson and Henderson got their start at 20, DiMaggio at 21. And per the above, Jones was right there with them in 7-WAR seasons. Also, the list of 24 names ahead of Jones includes guys that aren't eligible for the Hall yet (Trout, Pujols, ARod) or guys that won't make it but should be in the Hall (Bonds). If you have a sustained period of production that compares you favorably with other no-doubt HOFers, then I care a lot less about you falling off a decade later.

So he broke in early, contributed to a winning team at a high level, and sustained it from 1996-2007. If he knew this article would be written 13 years later, I bet he would have just retired right then. Or intentionally injured himself to stop his post-age-30 WAR and RAPTOR from hitting the skids. Stunning lack of foresight by Jones. It's amazing that a very durable guy that had been playing over a decade of a demanding defensive position for a team that went into the postseason every year started to break down. That's just bad luck! Chris Towers made a good point:

Dawson made the HOF and retired with 65 WAR over 21 years. Jones racked up 61 in 11 seasons. He also did it at a less demanding defensive position for a less successful team. If Jones was smart, he would have decided to be a worse player but for much longer so he'd get into the HOF. "But it took Dawson nine tries and he shouldn't be in the HOF, Whiskers." Well he is, and he wasn't a better player than Andruw Jones so where does that leave us?

Also, is the HOF to compare guys to the other guys already in the HOF or to their peers that they were playing against at the time? Randy Johnson was a hell of a pitcher. One of the best that this man has ever seen. He has 208 fewer career wins than Cy Young and between me and you, I don't think Randy is going to catch him. It was a different era and time. I get it. But so was Willie Mays to Jones, so I'm not sure why that's being held against Jones. From the article:

And then there’s the big debate about Jones’s defense. Nobody is doubting that Jones was an incredible defender — his 10 Gold Gloves speak for themselves — but the question is how incredible, compared with his historical counterparts. According to the defensive-runs estimates that go into WAR, Jones is not only on the short list of best fielders ever across all positions, but he is also the single greatest defensive outfielder in baseball history by no small margin: 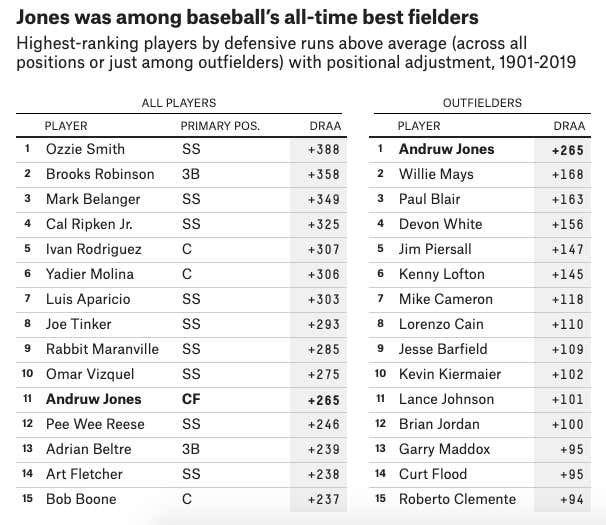 Similar to how fellow HoPDG member Todd Helton had stats that were too good to believe, Jones’s defensive metrics have crossed the line from “impressive” to “suspicious.” Bill James has argued that Jones’s numbers are inflated relative to the best fielders of earlier eras (like, say, Willie Mays) because the defensive data from Jones’s era is much better — and therefore we can have more confidence in it, making the ranges between the best and worst fielders wider for modern players.

Is baseball the only sport where a lineup of guys not in the HOF for various reasons would beat the guys actually in the HOF? Jones was so much better than literally everyone else at his position defensively that the numbers guys said that the numbers were funny. That alone should get Jones into the HOF.

The data from the Jones era is much better than it was during Mays' time. That's usually how sports and data work and I don't think this should be held against Jones. For a decade straight, he won the Gold Glove at CF. Gold Glove isn't a perfect measure but goddamn, what is? The numbers were apparently too good to go by and he certainly passed the eye test:

If anything, the upgrades to measuring defensive data should have some of the guys already in the HOF kicked out, rather than keeping deserving players like Jones from getting in. If he ran these accolades/catches up at a less demanding defensive position like 1B or LF, I may agree. But he did it at the most challenging OF position defensively, per Billy James:

[ - - 1B - LF - RF - 3B - CF - 2B - SS - C - - ]
with the basic premise being that positions at the right end of
the spectrum are more difficult than the positions at the left
end of the spectrum. Players can generally move from right
to left along the specturm successfully during their careers.

The most important defensive positions are up the middle, no surprises there. And Jones was no slouch with the bat either. From 1998-2007, a typical season for Jones was:

That was the average. For a decade. For a winning organization. While being the best defensive player at his position ever.

Good enough for me. Welcome to the only Hall of Fame that counts, Andruw: The one I made up in my mind and will tweet about with my online friends. Congratulations.