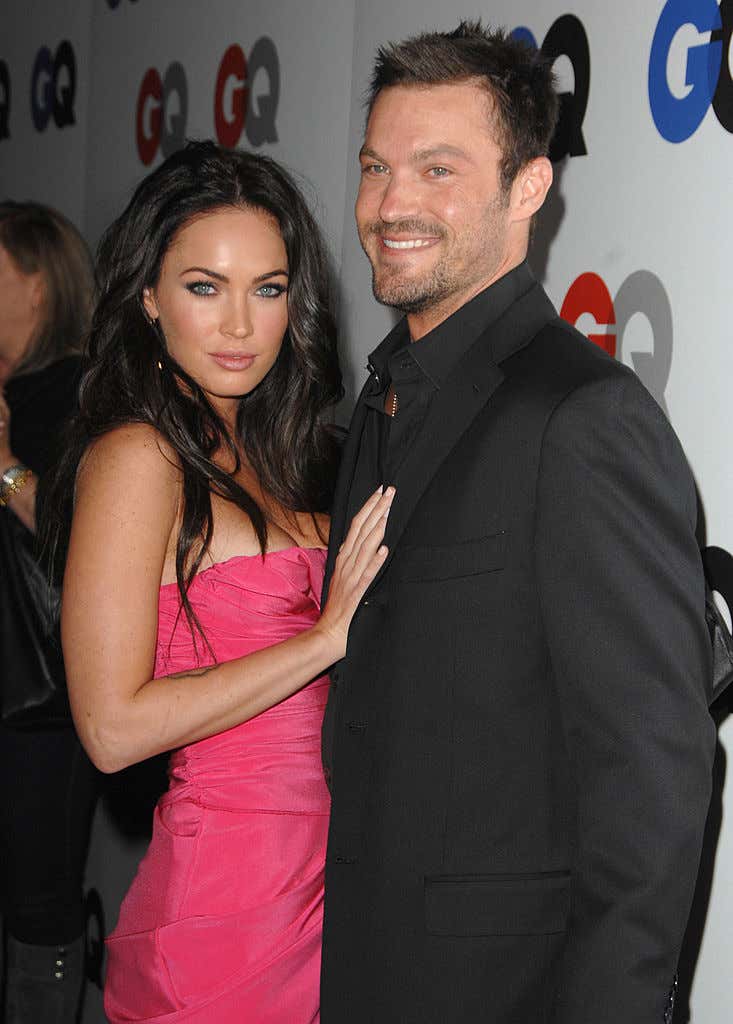 GMA - After nearly 10 years of marriage, Brian Austin Green and Megan Fox have called it quits.

On his latest episode of his podcast, "...With Brian Austin Green," the 46-year-old actor openly spoke about how their relationship deteriorated, saying they started drifting apart "at the end of last year."

I think it's safe to say we all knew this was coming. In fact, I would say I'm surprised it didn't happen sooner... except it did happen sooner back in 2015 when Megan Fox filed for divorce. Obviously they ended up reconciling, but I'm thinking it may actually be over this time. Not because I would ever root for two people to break up (I wouldn't), or because I think she's too good/hot for him (I don't), but because their timing was never quite right.

They started dating back in 2004 when Brian Austin Green was relatively well-known and Fox was only just starting her career. Then three years into their relationship this happened...

... and EVERYONE knew who Megan Fox was. It didn't matter if you were gay, straight, bi, male, female, transgender, or gender-neutral, EVERYONE fell in love with Megan Fox because how could you not?

So of course Shia LaBeouf fell in love with her! He never even had a fighting chance!

It didn't matter if she was engaged to Brian Austin Green at the time, he just couldn't resist.

Uhh… you think you could get that close to beauty and not fall in love? Impossible. And no one knew this better than Brian Austin Green.

I'm sure he also knew this was only the beginning. Immediately after Transformers, it was magazine cover after magazine cover… followed by more Shia action.

Megan's career took off a little bit more with each photoshoot and soon she was considered the hottest woman in the world. That would've been the time for her to date around, not take things too seriously, have fun, and enjoy the ride.

Except, she couldn't let loose and explore her newly-found stardom because she was engaged. So instead she got married, settled down, and had some babies. Every once in a while you would see her in something, be reminded of her hotness, and wish she would come back around.

Well, as it turns out, you just can't contain that kind of sexy.

He [Green] also confirmed that his separation from Fox, 34, wasn't triggered by anything other than emotionally growing apart, adding that he chose to open up about the private matter on his podcast in order to set the record straight.

"We've had an amazing relationship. I will always love her. And I know she will always love me and I know as far as a family what we have built is really cool and really special… I really don’t want Megan and I to be at odds. She’s been my best friend for 15 years and I don’t want to lose that… There's this sense of loss of, 'How do I go on with this big part of my life that I've always known and loved and shared changing?'"

Honestly, the fact that their relationship made it as long as it did is a testament to their love. The only problem is now that it is over, how do you move on from Megan Fox? Best case scenario, she has a really shitty personality and the next girl can bring it in that department. But if she's half as awesome as she is beautiful… well as Dr. Seuss would say, "Don't cry because it's over, smile because it happened."