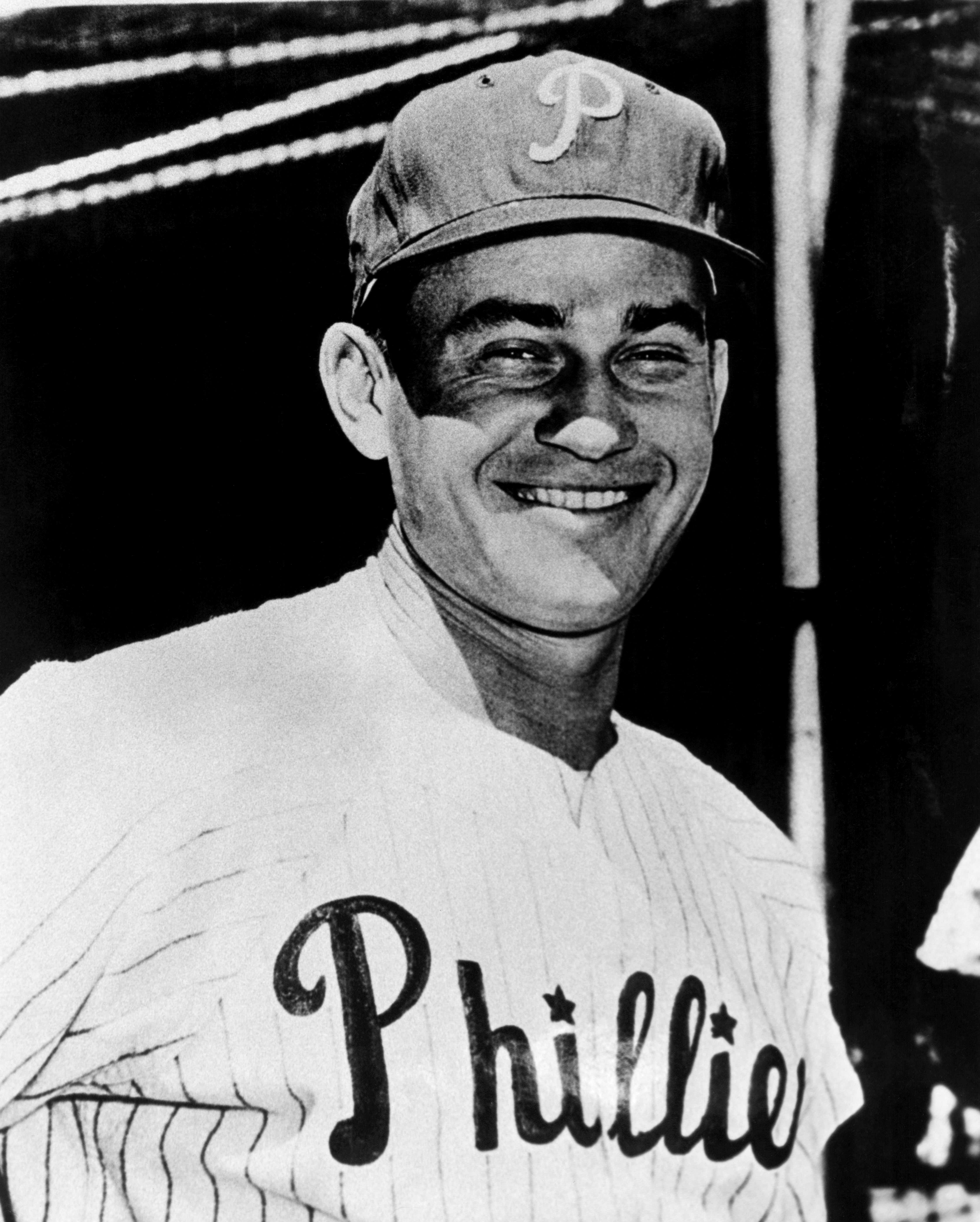 When he'd come to the plate Phillies' radio play-by-play broadcasters Gene Kelly and By Saam would regularly call out “It's Ding Dong Del” or  “Here comes Ennis the Menace”. It didn't take long for Del Ennis to establish himself as a power hitter who had a knack for driving in runs.

In 1946, 21-year-old Delmer Ennis, left fielder for the Philadelphia Phillies, was voted the first-ever Sporting News Rookie of the Year, batting .313 with 17 home runs, 30 doubles, 73 RBI, and a (.485) slugging percentage behind only Stan Musial for best in the National League. He was named to the  All-Star team, the first Phillie rookie to receive the honor, and finished 8th in NL MVP voting. 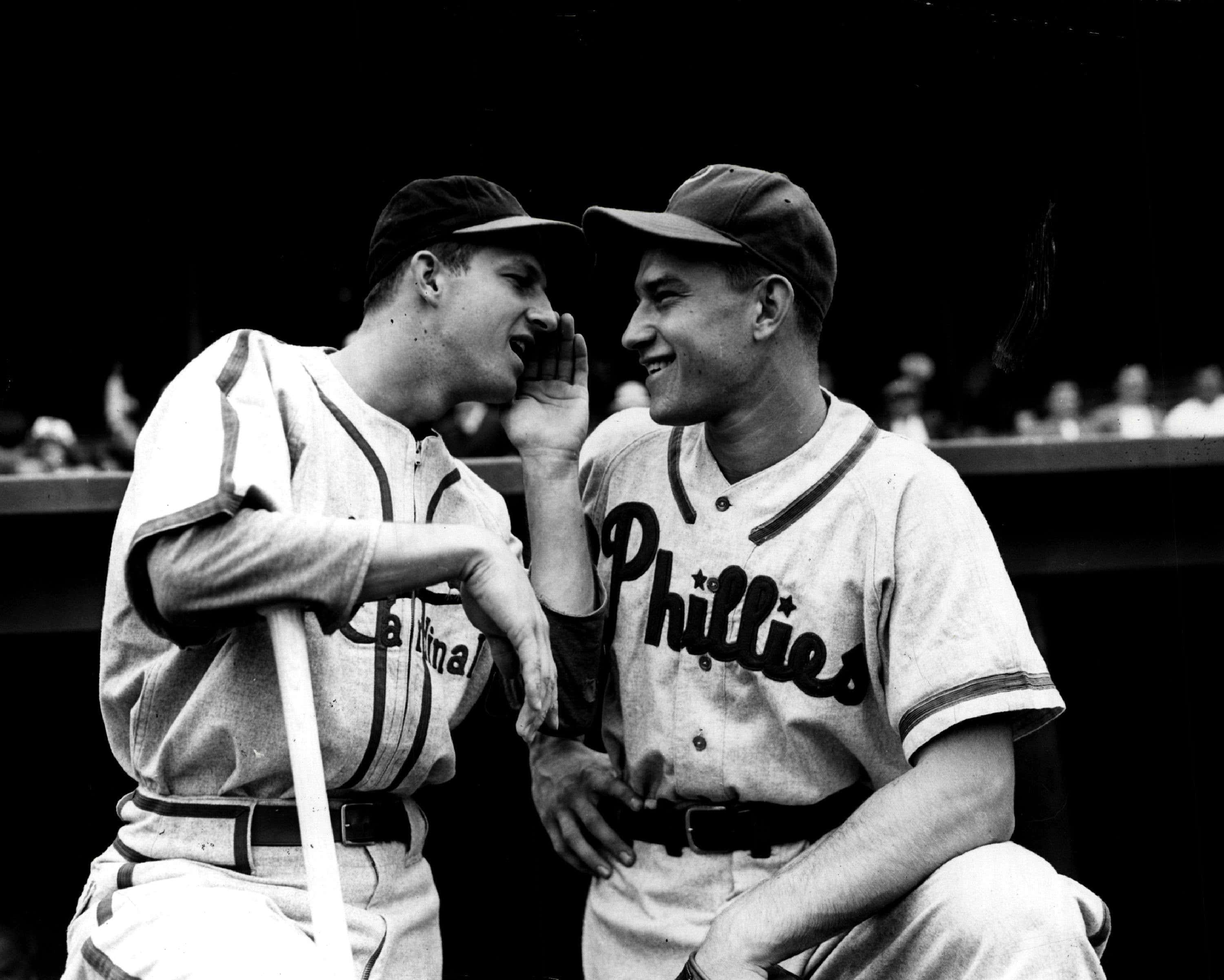 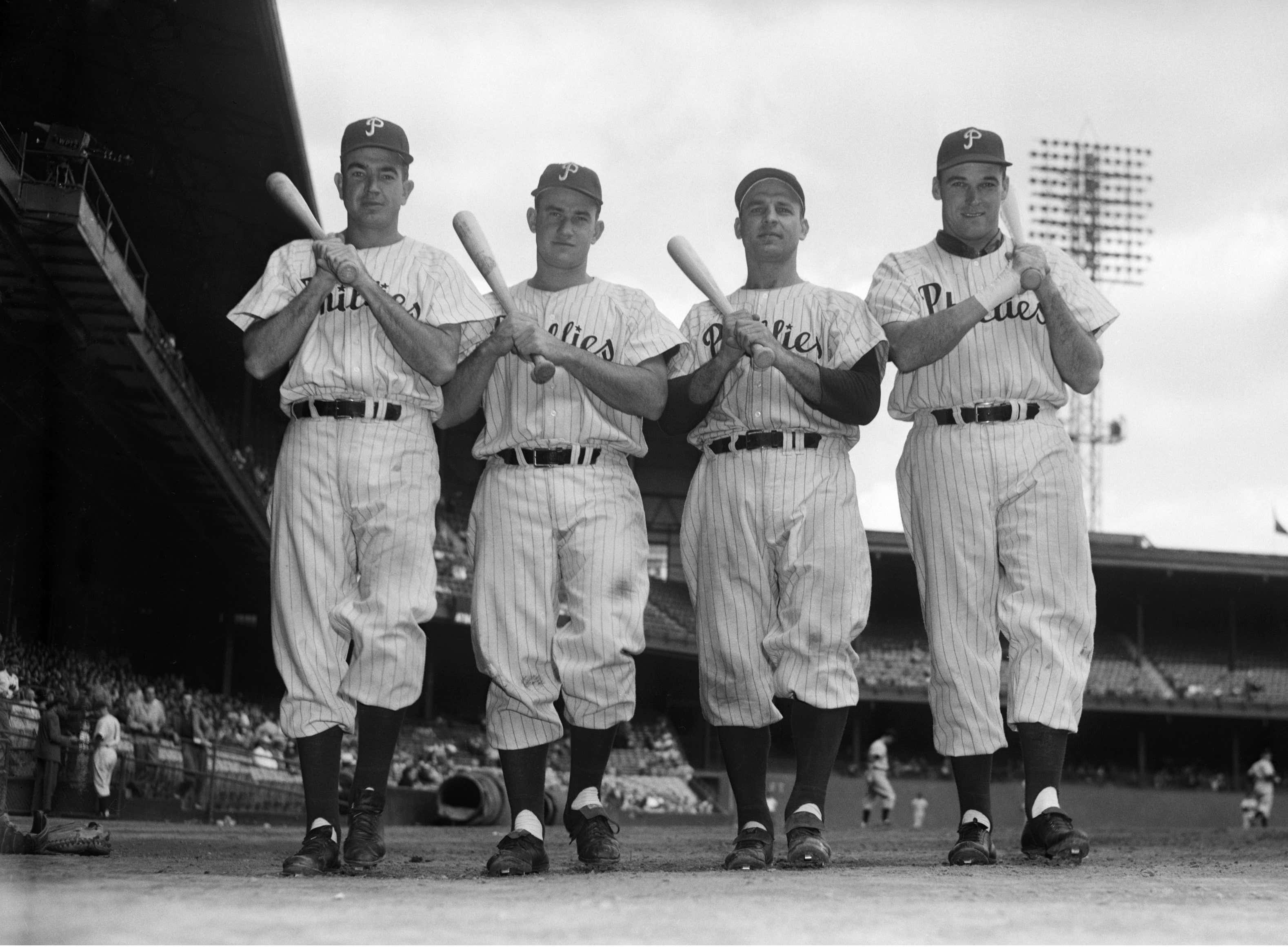 In 1950, playing right field, Del batted .311 with 31 home runs, 8 triples, 34 doubles, and a league-leading 126 RBI. He hit home runs in four straight games, twice, and was a key member of the "Whiz Kids", a team largely made up of rookies whose average age was 26. On the last day of the season, the "Whiz Kids" clinched the National League Pennant with a dramatic 4–1 victory over the Brooklyn Dodgers at Ebbet's Field on a 10th inning, three-run home run by left fielder Dick Sisler. It was the Phillies' first pennant in 35 years. 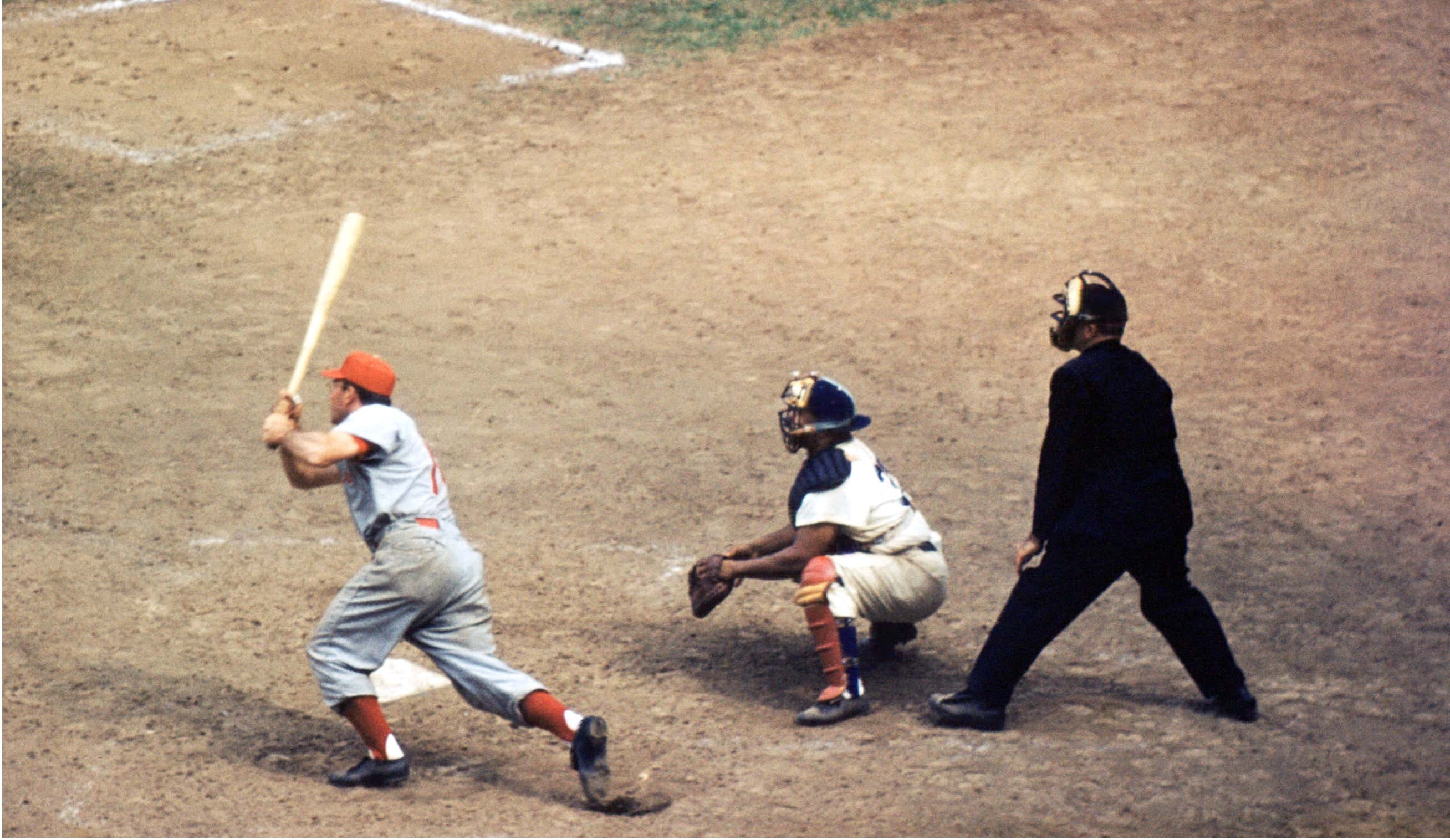 The "Whiz Kids" were unable to score more than 5 runs during the entire World Series and were swept by the Yankees, who won their second title in a row. The Yankees would go on to win 3 more in a row, and their streak of 5 consecutive world championships ('49-'53) is a record that will likely stand forever.

Del Ennis was born in Philadelphia and played football at Olney High School where he was an All-State fullback. He was a standout in baseball and when Phillie's scout Jocko Collins came to watch Del's teammate pitch, Del stole the spotlight, hitting two long home runs and Collins tried to sign him instead. Del was hesitant and wouldn't sign. Then, in '42 at the age of 17, he signed, but just before he was set to play in the Phillies' Canadian-American League, World War Two broke out and play was suspended. When play resumed in '43, Collins signed Del again. He played for the Trenton Packers of the Interstate League (B-Level) and batted .346 with 197 hits, 18 home runs, 37 doubles, and 16 triples, earning a call up to the Majors in September. But Del decided to serve his country and joined the Navy.

Once he graduated as a Signalman from the Sampson Naval Training Center, he was off to the Hawaiian Sea Frontier. When the Navy learned of Del's association with the Phillies they sent him to Honolulu where he toured the Pacific Islands through '44 and '45 and played in exhibition games. He impressed fellow serviceman and new part-owner and President of the New York Yankees, Dan Topping, and was offered $25,000 to sign with the Yankees, but he refused Topping and signed with the Phillies for a mere $50.

Petty Officer First Class Del Ennis was stationed in Guam where he stayed for one year and had an opportunity to play baseball against several major leaguers. He returned to the states and was discharged from the Navy in April of '46 and reported directly to the Phillies.

Because he missed spring training, Player Manager Ben Chapman sat Del at first, but then gave him an opportunity to pinch-hit on April 28th against the Boston Braves. Del grounded out to short. In his second game on May 1st and first start, Del went 1-4 with a walk. On May 2nd he was 0-4, May 3rd 1-4, May 4th 2-4 with a run-scoring double. Then, on May 5th, after going 0-5 in the first game of the doubleheader against the Cubs, in the first inning of the second game, Del hit his first homer, a two-run shot. He hit his second in the seventh inning, another two-run shot. 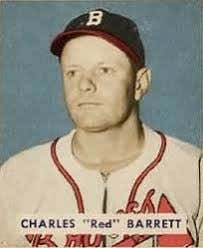 On June 8th, Del's birthday, Red Barrett of the St. Louis Cardinals had retired 22 Phillie batters in a row and was on his way to throwing a perfect game. A year earlier Barrett was 23-12 with 3.00 ERA, throwing a one-hitter for his 20th win. In '44 he beat the Cincinnati Reds 2-0, allowing only two hits while throwing just 58 pitches, the fewest in a complete game by a pitcher in MLB history, and in a game that only took one hour and 15 minutes to play, the shortest night game in MLB history. With one out in the eighth inning, Del spoiled Barrett's bid for a perfect game with a base hit. During his career, Del spoiled three bids for no-hitters. 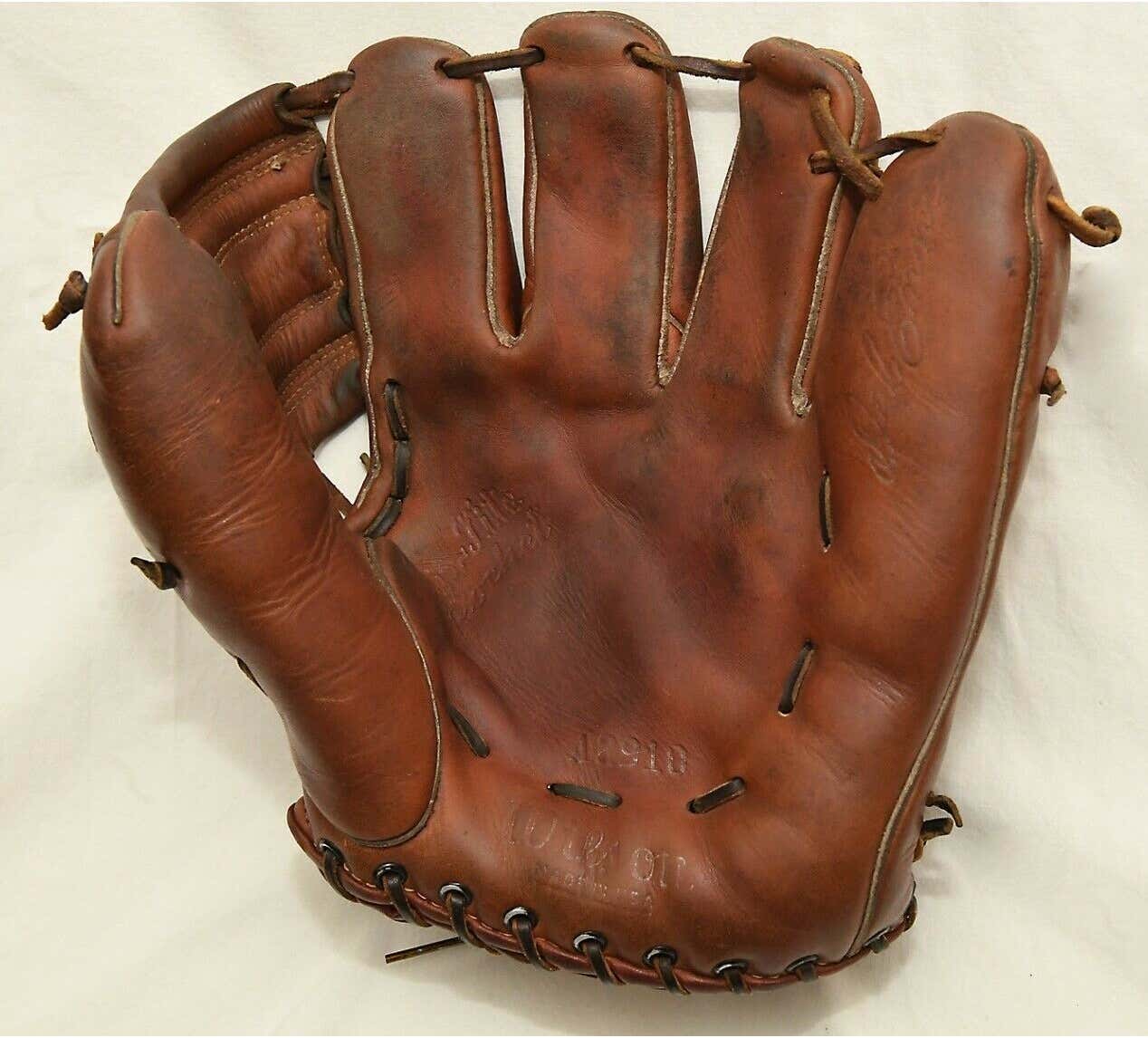 One look at Del's glove and it's you can see how easy it was to muff a fly ball...

Although Del was a hometown favorite, Phillie fans were tough on him. On July 23rd, 1955, Del's best day as a Phillie, he hit three home runs and knocked in seven runs, but in his second at-bat he popped out and Del remembered: "They booed the daylights out of me". It wasn't the first time either. In '51 Del had an off-year, batting just .267 with 15 home runs and the fans booed him mercilessly. In July of '54, in the second game of a doubleheader against the Cardinals, in the third inning with the bases loaded, Del muffed a fly ball and three runs scored. The packed house booed him and continued booing him as he ran off the field. In the bottom of the inning, with two on, two-out, and down 4-1, the booing got louder as he entered the batter's box. Del hit the first pitch onto the roof in left field at Connie Mack Stadium tying the score. The Phillies eventually beat the Cardinals 6-5 on a Stan Lopata pinch-hit two-run homer in the eighth inning. 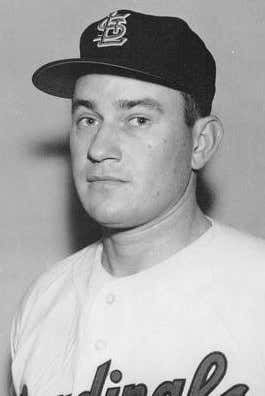 In '57 Del was traded to the St. Louis Cardinals for utility infielder Bobby Morgan and outfielder Rip Repulski. In '57 Del batted .286 with 24 home runs, 24 doubles, and 105 RBI. By '58, Del's numbers dropped considerably and with limited playing time, he only hit 3 home runs with a .261 average. In '59 he was traded to the Cincinnati Reds and after one week traded again to the Chicago White Sox where he was the starting left fielder through May and early June. During his first 11 games Del had 7 RBI, four of them game-winners, one against the Yankees in Yankee Stadium. On June 14th he played his last game and was waived on the 20th by the White Sox to make room for Norm Cash who had completed his military service, ending Del's career. 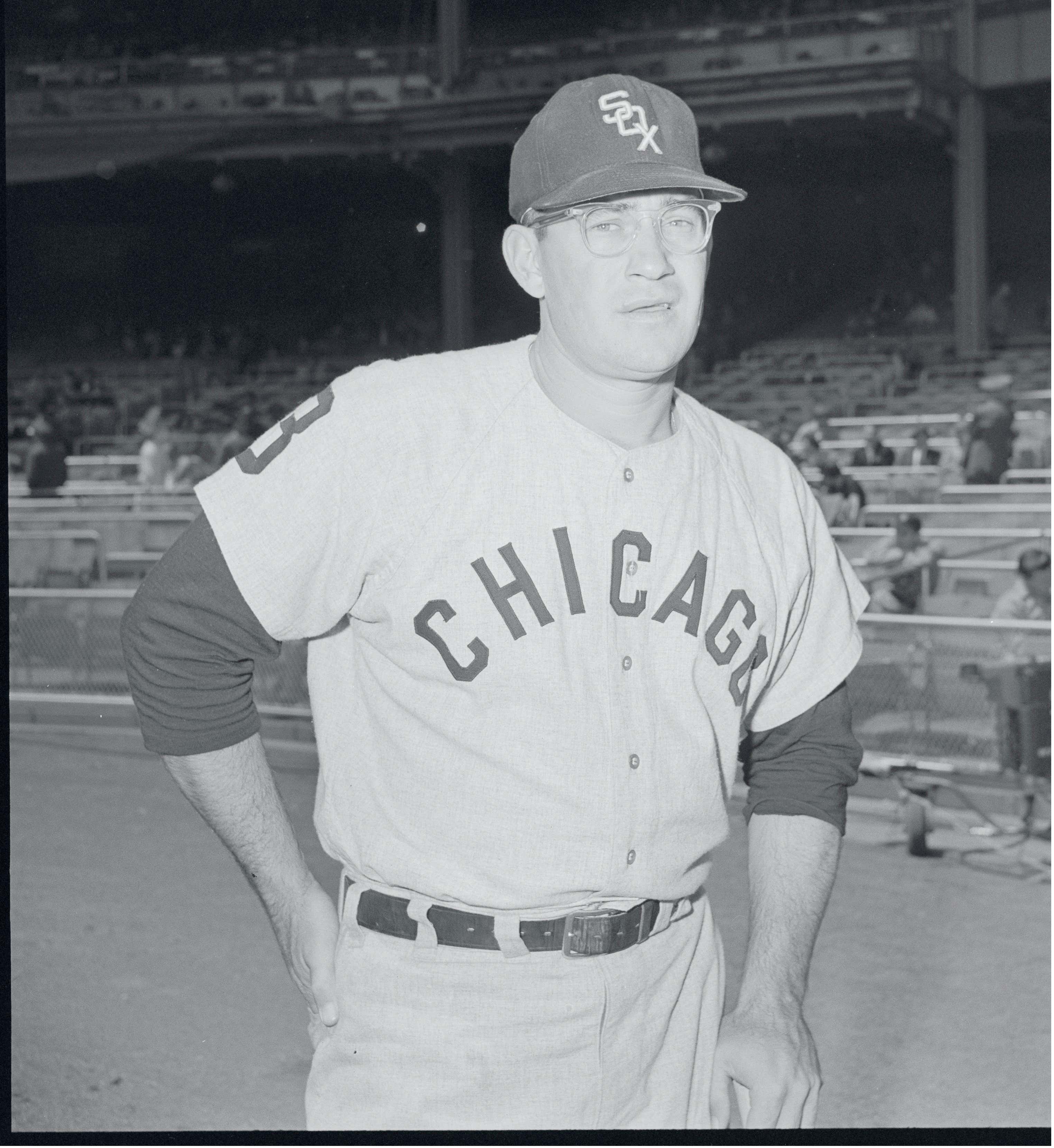 After 14 seasons in the major leagues, Del retired a three-time All-Star with a .284 career batting average,  2,063 hits, 288 home runs, 1,284 RBI, and a .969 fielding average. He hit five home runs off  Warren Spahn, seven off Don Newcombe, nine off Carl Erskine, and six off Johnny Antonelli. 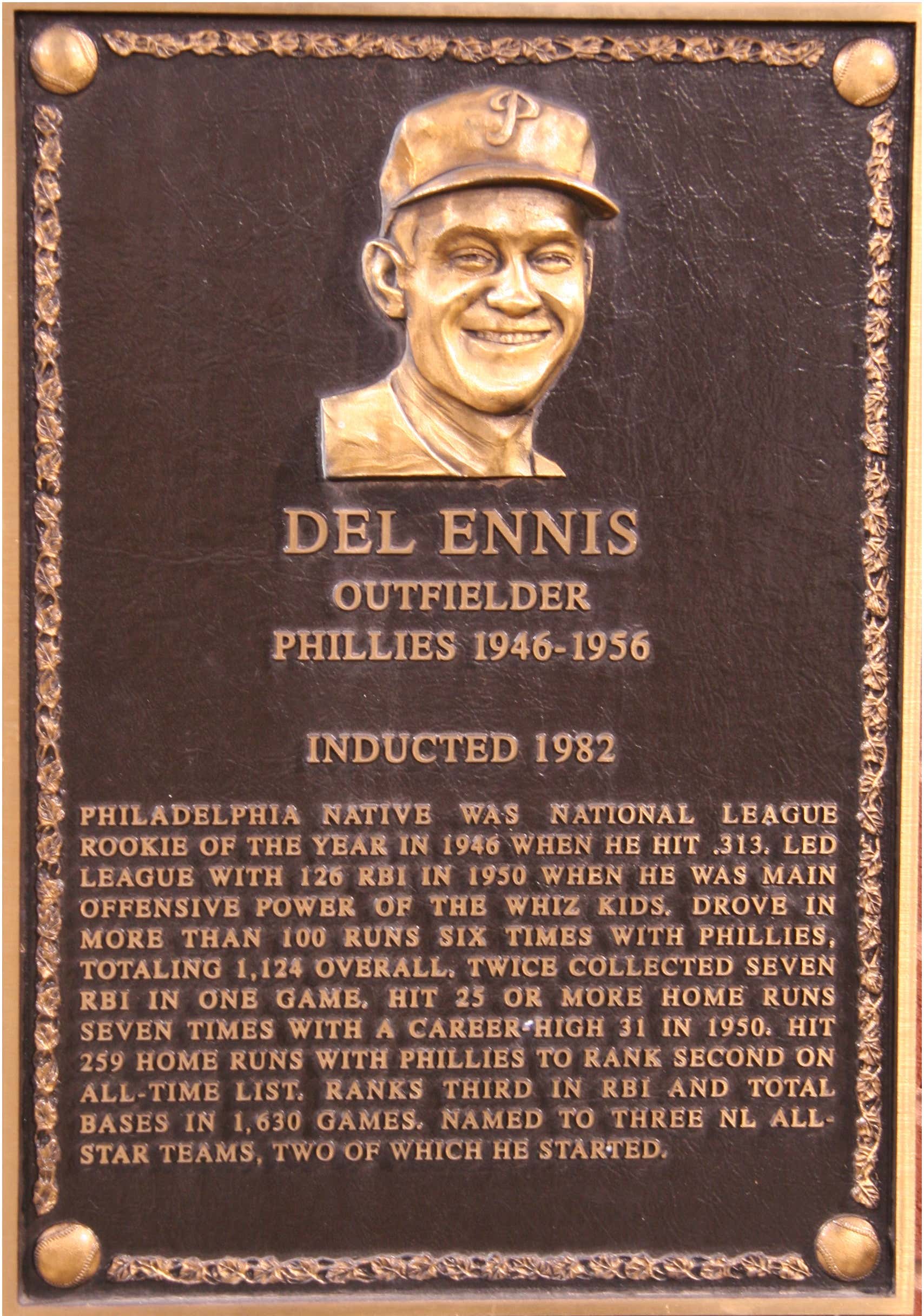 After his retirement, Del operated a bowling alley, Del Ennis Lanes, and bred greyhounds for racing. He named three of his dogs after the "Whiz Kids": Whiz Kid Roberts, Whiz Kid Ashburn, and Whiz Kid Ennis.

When you look through his career stats under "Most Similar by Ages", Del is most similar to Hall of Famers Stan Musial, Duke Snyder, Carl Yastrzemski, Billy Williams, and Dave Winfield.

Del passed away in February of '96 at the age of 70, at his home in Huntington Valley, Pennsylvania.