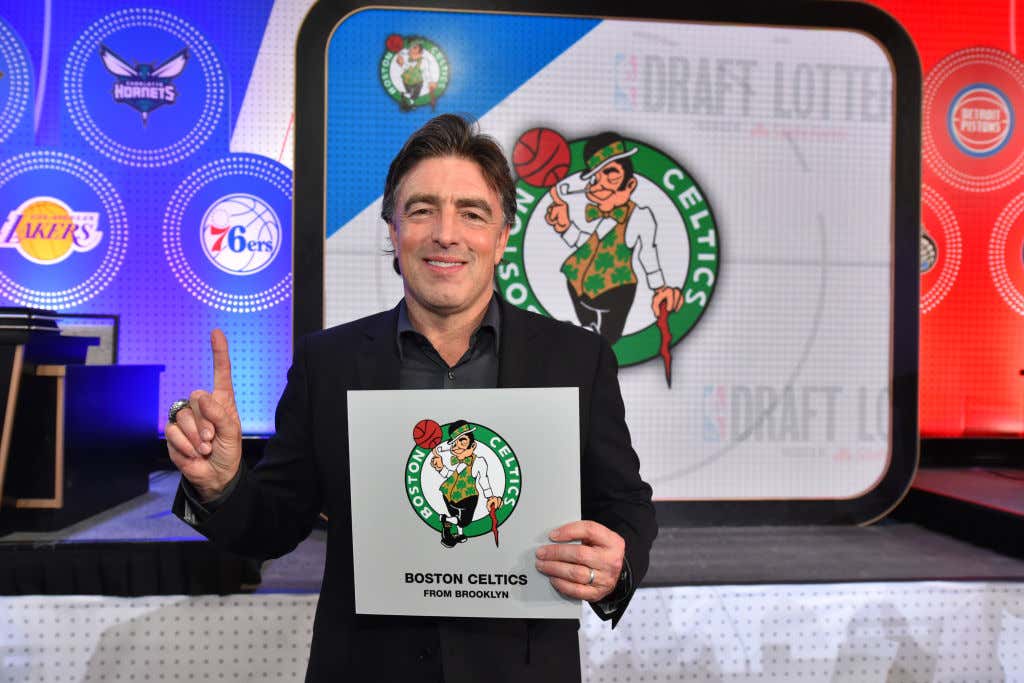 Earlier today Clem wrote a great blog about what Lottery Day means for Knicks fans seeing as how this year's event would have gone down today. While the two franchises could not be more different, Lottery misery is something Celtics fans and Knicks fans most definitely have in common. My entire life I dreaded the Lottery, knowing that somehow, some way the Celtics were going to get boned. It was always our destiny. Obviously two years stick out most

1997: The Celtics won 15 games and the big prize was Tim Duncan. They had the second worst record in the league and also owned the Mavs pick that was the 6th worst. The Celts had a 36.3% chance of landing Duncan. You might have heard, they did not get Tim Duncan

2007: Once again the Celtics had the second worst record in the NBA. Kevin Durant was who Ainge says he would have taken (wink wink). They had a 55.8% chance at a top 3 pick. They were jumped by 3 teams and ended up picking 5th. Had they not been table to trade that shit for Ray Allen this would have been another all time bone job

In their entire history during the modern draft era, the Celts had never won the Lottery. No frozen envelope, no shady David Stern shenanigans, it was just disappointment after disappointment. Well that all changed in 2017 when the Basketball Gods finally smiled down on this franchise during this event.

A lot is made about the Celts winning which we'll get to, but let's not forget it was a little suspect how the Lakers jumped into the top 3. That enabled them to keep their pick instead of having to give it to PHI. Phoenix had a 55.8% chance at a top 3 pick that year, ended up 4th with the Lakers jumping into the 2 spot. They had a 53.1% chance at losing their pick yet found their way into the top 3. This is also important because landing there allowed them to keep their 2019 first round pick, which after getting "lucky" AGAIN in the lottery (4th), they used it to trade for AD. Pretttttyyyyy interesting if you ask me.

But back to the Celts. You have to remember that back in 2017, pretty much everyone was all in on Fultz. He was the consensus #1 pick of that draft. We all had dreams of pairing him with Isaiah. I was absolutely certain that once they made it into the top three, it was going to be the same old story with them somehow getting screwed. I almost didn't believe my eyes when I saw the Lakers and Sixers cards get pulled first. It finally happened for the first time in my life, the Celtics had actually won the Lottery.

Little did we know, Danny Ainge knew Fultz was a fraud right from the jump and reportedly never had any interest in him. Looking back we know that to be true because he did not take Fultz to Chipotle for lunch during their draft workout. They instead went to b.good. Red flag city. That was our first sign he had something up his sleeve we just didn't know it at the time. A few weeks went by and the next thing you knew Ainge traded the #1 pick to PHI for #3 and a future 1st in either 2018 or 2019. That all led to this

Danny landed the best player from the 2017 Draft and what ended up being Romeo Langford for his efforts. Just like that the entire future of the Celtics changed. They landed that elusive white whale. Tatum is the only player in the top 10 from that draft that has made an All Star team, and he's most likely going to be the first one to make an All NBA team. He's a stud and franchise player by every definition of the word. Sure the Lakers pick in 2018 and Kings pick in 2019 didn't exactly break their way, but it was essentially a free asset. Plus Romeo is awesome so I have few complaints as to how things shook out.

Now that the team is out of Nets picks and the Grizzlies are having a surprise season this year, barring something crazy it'll probably be a while before we see this team in the Lottery again. Fine by me. If the final memory of that stressful night is the arrival of Jayson Tatum, well that's good enough for me.