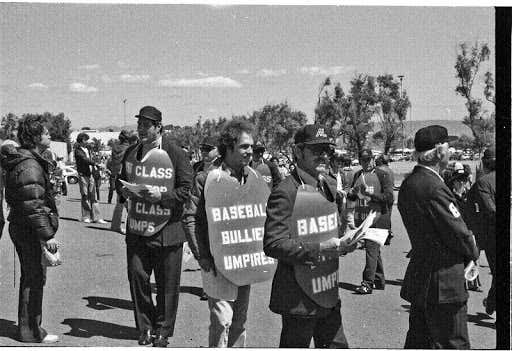 Six weeks into the season, the regular umpires return to the job of calling balls and strikes after being on strike. The Umpires of the American and National League were dissatisfied with their new deal and walked out of the job as the season began. While the regular men in blue were walking picket lines, amateur and retired umpires were hired as replacements. Eight of those replacement umpires would remain on the job.

At the time of the strike, umpires were underpaid, with the highest-paid umpire making $40,000 a year, compared to the NBA officials who were making $60,000 and working half as many games. Umpires also lacked a secure pension plan, hand little to no vacation time, and had no job protections from management as they could be fired without warning with little recourse at the getting their jobs back.

Richie Phillips, the head of the umpires’ union, instructed his brethren not to sign the labor deal that was presented as the umpires’ strike began with the start of the regular season on April 4th. Two umpires signed the agreement and were required to work for ten days before joining the rest of the umpires on picket lines outside of the stadiums. The replacement men in blue were made up of amateur umpires, retired umpires, and minor league umpires.

After six weeks of negotiations, the Major League Umpires’ Association reached a deal with Major League Baseball. Umpires now were granted in-season vacations, with several vacation relief umpires being at the call to work in the majors. Umpires received significant raises and increased per diems to pay for travel expenses. Each umpire was also were given a 401K plan, as the Players’ Association supported the umpires’ labor action.

Eight rookie replacement umpires remained on the jobs but were not allowed the join the Umpires’ Association. The umpires who crossed the picket lines were given double service time and granted an extra week of vacation. This created animosity for the umpires as they were often mistreated by the veteran striking umpires. Some had their lockers vandalizes while their calls were not backed up on the field, leaving the as targets of ridicule to players, managers, and fans.

The eight retained umpires were called scabs, by the veteran umpires. Fred Spenn was fired by the American League in 1980; Steve Fields was canned by the National League a year later. In 1982 AL umpire Dave Parks resigned as the replacement umpires labor complaints went unheard. Lanny Harris was fired by the NL in 1985, while Dave Pallone, resigned after he was accused of having sex with a 14-year-old boy. Pallone, best known for getting shoved by Pete Rose, was never charged and later came out as gay, saying he was often harassed by the other umps. NL Umpire Fred Brocklander retired in 1992 due to health reasons. The last two who remained after the umpires became under the direction of MLB were John Shulock, who retired in 2002, while Derryl Cousin, the last of the scabs worked until 2012, becoming a crew chief in his final season.