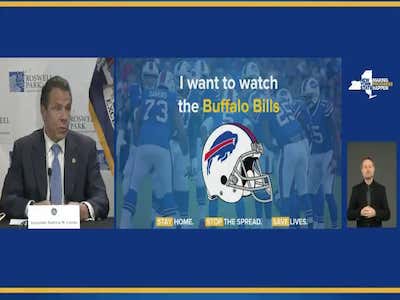 I thought this was a meme when it was plastered all over my Twitter timeline today. But I am so happy it isn't. I know we are living in super political times that has had napalm thrown on the fire as this pandemic has turned everything from living in quarantine to wearing masks into a shouting match. But if you can't get behind the phrase "I Want To Watch The Buffalo Bills" no matter who says it, you can get the fuck out of the country.

The best part is you don't even need to be a Bills fan to want to watch the Bills play. In fact, I bet most Bills fans are fine enjoying the offseason being mentioned as the team most likely to knock the Patriots off their AFC East throne is Bill Belichick can't instantly figure out how to win 10+ games with Jarrett Stidham like he did with Matt Cassel and enjoying the last few months of Stefon Diggs being happy. But in the end, we all just want to watch football, even if it's Buffalo Bills football.

P.S. I'm not sure if this was the sign language sign for #BillsMafia before today, but it is now.