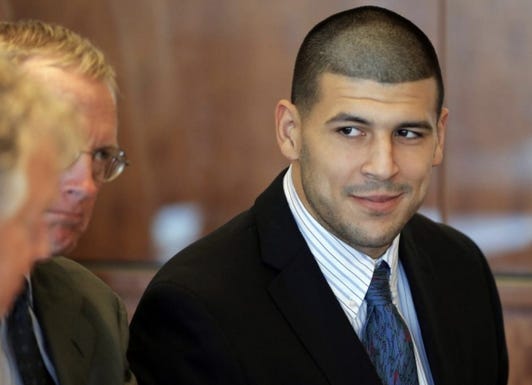 (Source) – Scary moment at the Aaron Hernandez murder trial — when the courtroom was cleared after officials say someone called in a bomb threat. The building was evacuated — and people were told to wait across the street. Earlier in the day, Hernandez’s cousin was on the stand … and says Hernandez’s co-defendants seemed jittery on the night Odin Lloyd was murdered. Officials are still investigating the bomb threat.

When I was a freshman I went to Durfee in Fall River. One of the pastimes was calling in bomb threats, kids would do it all the time when they had a test that they weren’t prepared for and it worked like a charm. Looks like Aaron picked up some advice from one of those kids. Hey man you got a test that isn’t looking like it’s gonna go your way? No problem, just say you’ll blow the building up. Boom. Free and clear. Has anyone even seen Hernandez since this thing got called in? He’s probably halfway to some flop house out in LA by now. First smart criminal move he’s made in his entire life.