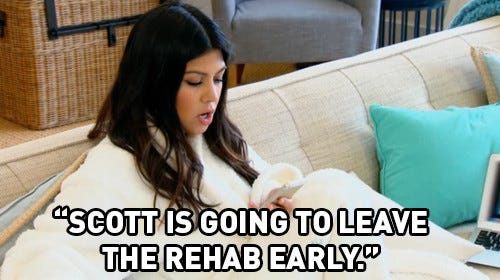 (Source) — Scott Disick couldn’t even last a week in his posh rehab facility down in Costa Rica — but he’s killing it on the local nightclub scene. If Scott’s alleged rehab plan is starting to smell a little fishy … that’s only because it is.

I didn’t know Scott Disick was in rehab but it turns out he left again and I guess this is just his “thing”? Well going to rehab whenever you have a tough weekend is pretty much the greatest “thing” of all time. Rehab is supposed to be a one time deal, you go and then you’re done. Some people have “slip ups” but I’ve never heard of anyone who goes on a Monday then is at the bar on Friday like Disick does. He doesn’t go to rehab, he goes on hangover vacations. How awesome is that? Everyone knows that hangovers don’t exist in tropical climates so if he has a tough night out in NYC he’s just like “fuck it, I’m going to Costa Rica for a few days. Set me up by the pool with some cucumber water.” If I was rich I’d do that every Sunday night too. Party my dick off all weekend, Sunday Funday until about 11 o’clock then hop a plane to the Caribbean. Wake up and feel like a million bucks because now I’m on vacation and hangovers can’t happen on vacation due to the laws of physics. Smartest idea ever.