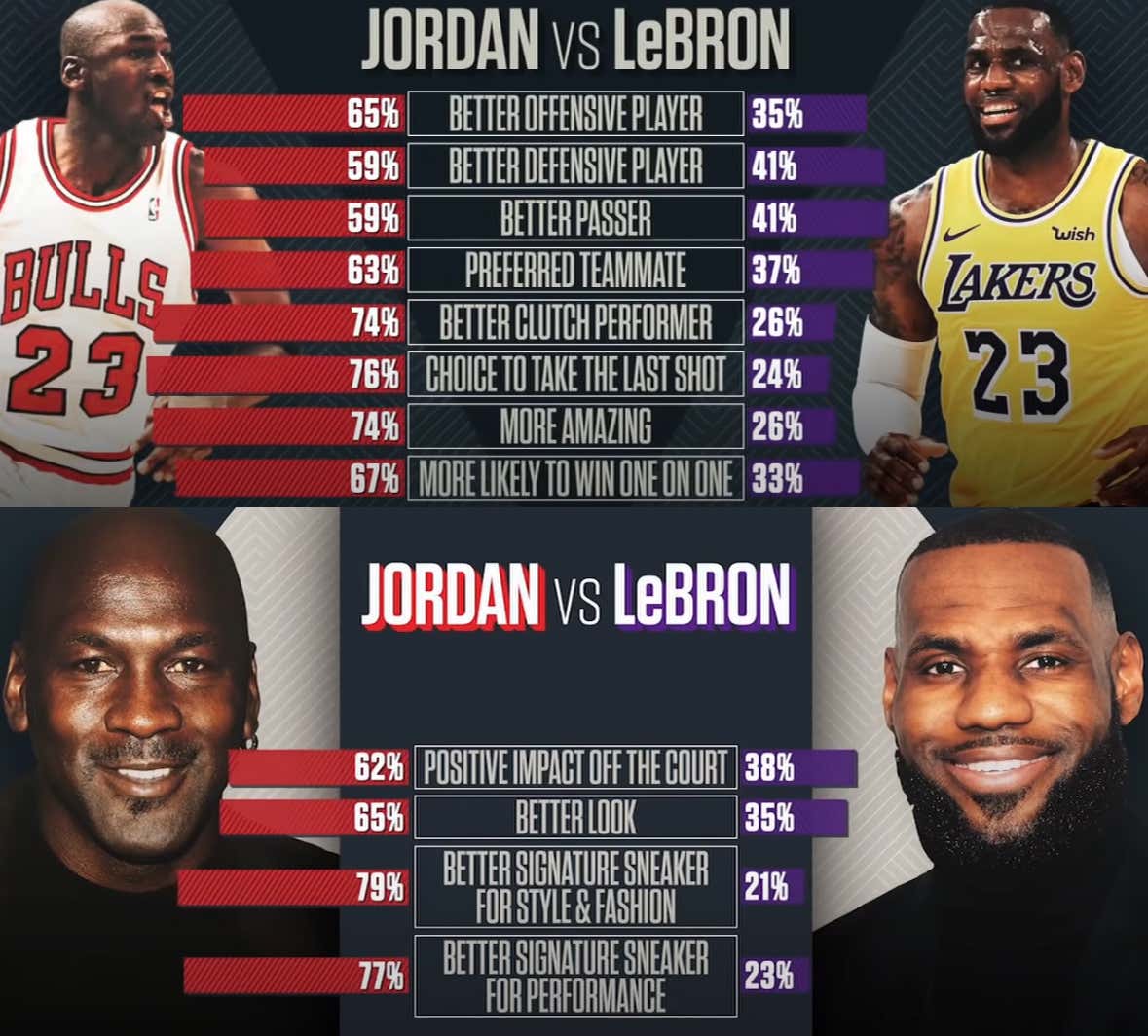 I'll admit, I never thought I'd see the day where ESPN ever released something that made LeBron look bad. Not only that, but it was more surprising that the LeBron stans out there would get dominated like this in a public poll. You would think that with the whole world slobbing MJ's knob that they would take this opportunity to at least get even. Now I don't want to make this a LeBron apologist blog, because I too consider MJ the GOAT, but some of these results are laugh out loud funny.

Right off the bat the first thing that caught my eye was that 59% of people who took this survey say Michael Jordan is a better passer than LeBron. I'm sorry, on what planet? To Jordan's credit, he did have that one season in which he averaged 8.0 assists in 1988-89. But a guy that is a career 5.3 AST player with an AST% of 24.9% is not a better passer than LeBron. I'm sorry he's just not. Compare that to LeBron's 7.4 AST average and 36.4% AST% we're not even in the same ballpark. LeBron has vision and passing ability that's closer to someone like Magic. Even with the eye test, anyone who is being objective should admit that LeBron is a better passer

The next thing that made me laugh were the results of the question as to who is better 35 or older. A total of 79% think that's MJ????? I spit out my coffee that I was actually drinking. As a reminder, here are Jordan's two seasons in which he was 35 or older

I'm sorry, what am I missing that 79% of people think MJ's older seasons were better? Is this a situation where they put up those results after like 6 people voted or something?

I'm also not certain the teammate preference question should be so heavily skewed towards MJ either. I mean LeBron may be a dick at times and be willing to trade everyone on his roster, but he never punched anyone in the face. You never saw him torment someone like MJ did Scott Burrell. I know nowadays everyone says they love MJ for what he did to bring the best out of them, but I don't know if that makes him a preferred teammate.

I get it, a lot of this is most likely due to recency bias and all that. Again this is NOT me saying LeBron is better than MJ. I just saw those results and couldn't believe my eyes. Even more surprising was the fact that ESPN allowed this to be shared with the public. ESPN is LeBron James. I have to imagine Klutch made a pretty angry phone call to whoever was in charge of this graphic. This is like a glitch in the matrix or something.

It just goes to show that as strong as you think LeBron stans are, and as many that you think may exist, they are not more powerful than Jordan stans. You almost have to respect it. Even if you think Jordan is higher all time and that will never change, to think that there is not a single thing that LeBron does better than MJ is astounding. It's OK to admit there are certain areas he was better than MJ in while still thinking MJ is the GOAT.

But for ESPN to allow these result to ever see the light of day is the upset of the century for me. I never thought I'd see the day where they ever put something out that made LeBron look this bad. Somewhere Skip Bayless is pleasuring himself to those graphics, you know it, I know it, everybody knows it.