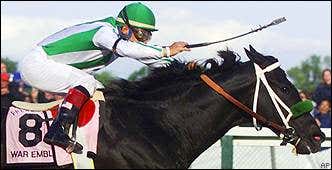 War Emblem wins the Preakness Stakes, coming one step closer to the first Triple Crown since Affirmed in 1978. The wild stallion was often temperamental and had a habit of biting those around him. War Emblem changed trainers with Bob Baffert taking over from Frank Springer. Jockey Victor Espinoza never met the horse before winning the Kentucky Derby. War Emblem would fall short, finishing eighth in the Belmont Stakes.

War Emblem was sired on February 20, 1999. His sire was Our Emblem, who was bred with Our Sweetest Lady. The dark brown horse was difficult to train, as War Emblem often chomped at its trainer, earning the nickname “Hannibal Lecter.” Besides seeming to hate all of his human handlers, War Emblem had trouble working with other horses, scaring away many buyers. The horse would go unsold until three weeks before the Kentucky Derby when he was purchased by a Saudi Prince.

Despite his training difficulties, War Emblem won his maiden race in Arlington as he finished first in two of three races as a two-year-old. Things started poorly for War Emblem in his season as a three-year-old, as he finished out of the money in the LaConte Stakes and Risen Star Stakes. After Prince Ahmed brought in Baffert, War Emblem, turned things around, winning the Illinois Derby to qualify for the Kentucky Derby.

War Emblem was a horse with an attitude, and Victor Espinosa first got to know it on the morning of the race at Churchill Downs. With horses like favorite Medaglia d’Oro in the race and Perfect Drift, War Emblem was a 21-1 long shot running out of the fifth gate. At times War Emblem cost himself early as he was often antsy inside the gates. War Emblem needed to get off to quick starts as he struggled when in a crowd. On this Saturday, War Emblem was calm and burst out of the gate flawlessly to win the run for the roses in a time of 2:01.13, finishing well ahead Proud Citizen who finished second, while Perfect Drift ended up third.

For the Preakness Stakes, War Emblem drew the eighth gate in a field on 13 horses. It was a fast pace in Pimlico as War Emblem took the lead on the far turn and held off Magic Weisner by three-quarter lengths to win the Black-Eyed Susans in a time of 1:56.36, as Proud Citizen finished third.

All eyes were on War Emblem three weeks later when he went to the Belmont Stakes looking to make history with a crowd of 103,222 on hand. In the tenth gate in a race with 11 horses, War Emblem stumbled out of the gate and found himself behind the leaders. Victor Espinosa was able to stabilize the horse and got to the rail, which helped him get back to the front of the race. However, he extended too much energy and faded down, the stretch, finishing eighth in the race as long shot Sarava won the mile and a half race in a time of 2:29.71, while Medaglia d’Oro finished second and Sunday Break finished third.

War Emblem rebounded to win the Haskell Invitational at Monmouth Park two months later and finished tenth in his final race at the Breeder’s Cup Classic before being put out to stud. War Emblem was just as difficult in breeding as he often fought with the mares he was to mate with. He died on March 11, 2020, because of a ruptured intestine.