Alright, you all know the story by now. James Harrison went on Willie and Steven Cheah's podcast and said how Mike Tomlin handed him an envelope after knocking Browns receiver Mohamed Massaquoi out of the game back in 2010. But you don't have to take my word for it, you can literally take James Harrison's word for it. He explicitly says it right here: 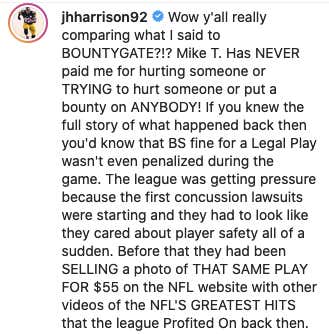 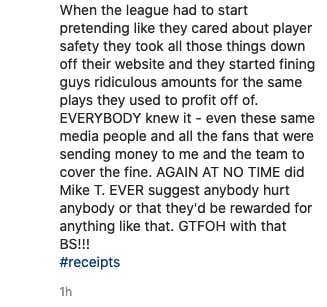 Look, James. I don't care if they were SELLING a PHOTO of THAT same PLAY or not, you got fined $75,000 for the hit because it was dirty, and then Mike Tomlin handed you an envelope. I believe you said it was "the G-est thing Mike Tomlin ever did". So you can whine and moan about player safety and profit and #receipts and whatever you want, you admitted that Mike Tomlin handed you an envelope after knocking a player out of the game. Here's my #receipts:

I don't care about the concussion lawsuits or whatever you were rambling about in your post, the only fact that matters is that you knocked a player out (two actually) of the game and Tomlin walked by and gave you an envelope. Look back on the postgame articles written back in 2010. Here's some interesting quotes:

"They were legal hits, not fineable hits," said Steelers coach Mike Tomlin. "He played good football. James is always ready to deliver for his teammates.

Good football? James Harrison knocked out two Browns receivers in this game, giving them head injuries. Tomlin is proud of his boy though.

"[Harrison] plays hard like that every week," said Steelers linebacker James Farrior. "Today was especially good because he took out their top dog, really."

Now, to address the absolute morons of the internet that have suggested that it was an empty envelope and maybe just a symbol that we got your back, I ask you this: would that be "the G-est thing Mike Tomlin ever did"?

Shout out to secretaries of office buildings across the country -- total G's. Always handing out envelopes. No, it was a G move because he gave you money for knocking out a player, which is illegal. My #receipt on that one is the Saints, Gregg Williams, and Sean Payton.

Mike Tomlin needs to be suspended. I demand it.