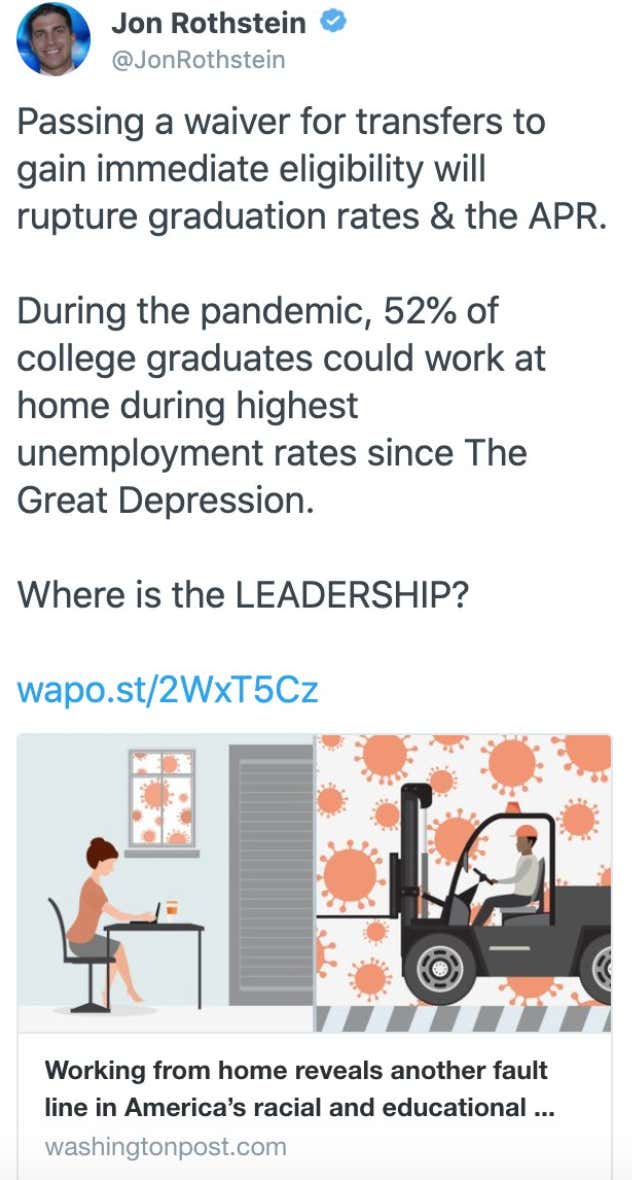 This is it. This is my favorite tweet in the history of Twitter. Why? Because it makes no goddamn sense but all the sense in the world with it being Rothstein. I know Jon is a friend of PMT and I genuinely like the guy. He's a great guy. But he's also the ultimate shill for coaches. No one and I mean no one puts up more transfer bullshit than Rothstein. Why? Because he gets his info from the coaches so this is his way to keep that relationship. He can be the mouthpiece for coaches who don't want to go on record.

But this? This is by far the best way to get a point across that makes no fucking sense. He sees an article from the Washington Post about the pandemic increasing the economic divide in this country. Only one thing to blame. TRANSFERS. Not even college transfers, specifically college basketball transfers.

The best part is - transfers happen without having to sit out in plenty of sports, obviously not the major two. It doesn't kill the game. It's not some negative to have a change of scenery. It sure as shit doesn't lead to something during a pandemic. Imagine thinking a guy who was under recruited, blowing up at a low-major and bettering his chance to play professional basketball by going to a power-6 school is a bad thing? Couldn't be me.

I've said it before but I'm all for the one-time transfer rule. It should be passed. You should be allowed to transfer once without sitting out unless your coach gets fired/leaves. If that happens you should be able to transfer no matter what without penalty. 95% of kids go to a school to play in a certain system or for a certain coach, I don't know why we try to hide that fact.

Rothstein needs to just be the robot. Go back to the automated tweets after a coach wins. What a just unbelievable tweet here.