Here's how I interpret that Giants statement:

Here are the details and boy are they something!

TMZ- According to police, the two men were partying in Miramar, FL on May 13 ... when things took a disturbing turn. Cops say Baker and Dunbar were allegedly hanging at a cookout -- playing cards and video games -- when an argument broke out and Baker whipped out a semi-automatic firearm. Cops say the men began to rob party guests ... with Dunbar assisting in taking watches and other valuables at the direction of Baker. At one point, cops say Baker directed a 3rd man -- who was wearing a red mask -- to shoot someone who had just walked into the party ... but fortunately, no one was actually shot.

Law enforcement says the men made out with more than $7,000 in cash -- along with several valuable watches including an $18,000 Rolex watch, a $25,000 Hublot and a pricey Audemars Piguet timepiece. There are conflicting reports from witnesses about whether Dunbar was armed with a gun -- some say he was, others say he was not. One witness told cops they had met Baker and Dunbar at a party a few days earlier in Miami -- at which the NFL players had "lost" around $70,000.

Our sources tell us the men had "lost" the money in high-stakes card games and other forms of gambling. One witness told cops the men were gambling again at the May 13 event ... when an argument broke out and Baker allegedly flipped a table and busted out his piece. According to cops, some people at the party believe it was a planned robbery because when the 3 men were done taking valuables, there were 3 getaway cars strategically positioned to "expedite an immediate departure."

What the fuck? I have grown accustomed to Giants DBs doing some stupid shit over the last few years. But this is still at least a solid 8/10 on the Yikes Scale on just DeAndre and Quinton acting like Pumpkin and Honey Bunny from Pulp Fiction, let alone allegedly telling a dude in a mask to shoot someone. Time to hit the reset button and update the sign! 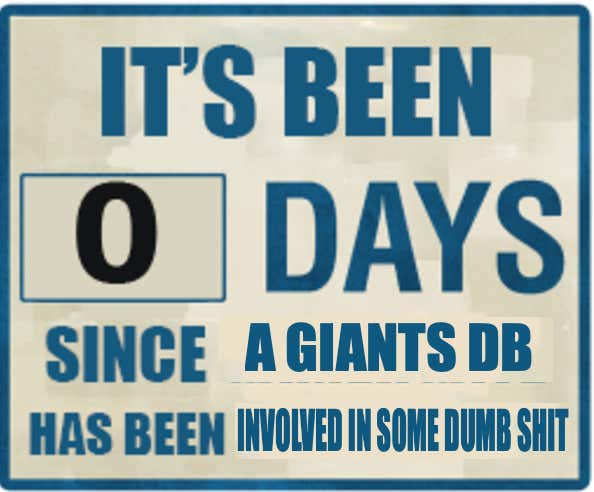 DeAndre Baker was brutal his rookie season and a bunch of Giants fans (myself included) were hoping he would get better with a year under his belt along with a new coaching staff. But God knows how this will all shake out and when he'll see the field again. Turns out the reason Baker fell last year may have been warranted (pardon the pun).

Thankfully Dave Gettleman collects defensive backs like Thanos collects Infinity Stones, so the Giants have other bodies to try to fill in for DeAndre if he is gone for a while. On the downside, we may never see Coach Judge ever crack anything resembling a smile since losing a starting DB to a felony would be bad since last I checked, the National Football League is a passing league. Maybe we can all agree that boys will be boys when it comes to gambling debts in honor of The Last Dance airing this month and instead focus on Quinton Dunbar holding a press conference THIS MORNING and didn't even admit to any sort of malfeasance. Respect the law and respect the biz, Q!!!

The Redskins knew what was up.

Imagine potentially throwing your NFL career away for $7,000 in cash and a couple of watches. What an alleged idiot. What a fucking alleged idiot.

At least a Giants DB being involved in the news gave me a much needed sense of normalcy again.