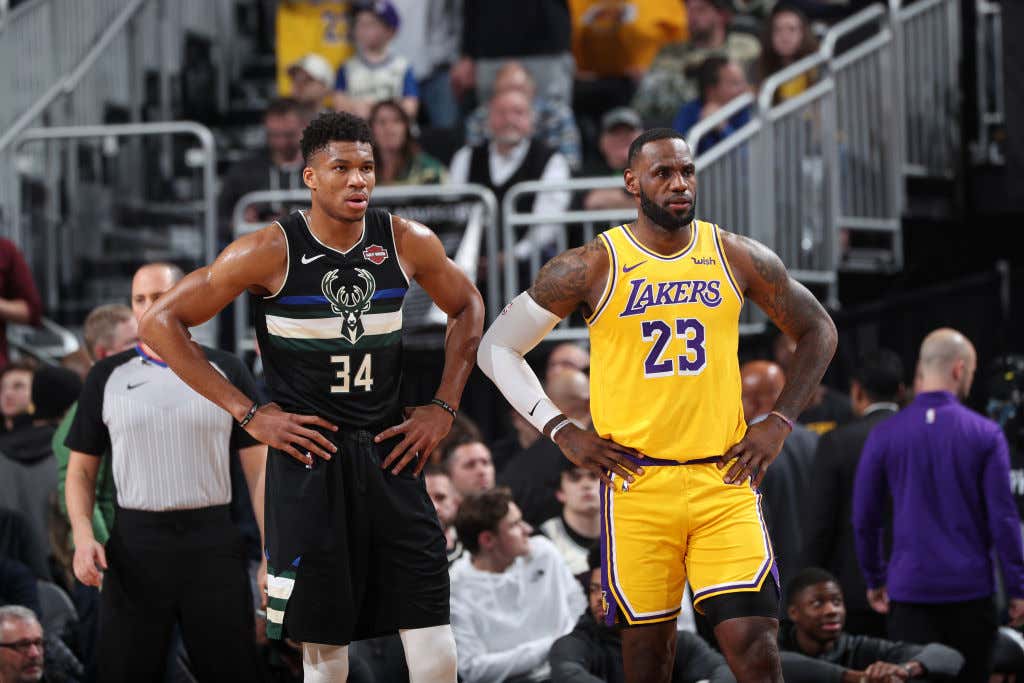 With all signs pointing to the NBA eventually returning at some point this summer and playing some sort of Playoffs, it made me wonder. Of all the stars that will be in the playoff field, who benefits most if they find a way to win the whole damn thing? I'm talking legacy, perception, what it might mean for their future, all of it. One of the reasons I'm so excited to see this year's playoffs is because there are so many intriguing storylines and so many star players have a ton of the line. Let's run down everyone's case and at the end I'll make my official selection.

May as well start with the big guns. Giannis might have as much pressure on him as any superstar in the league once things come back. For the sake of this blog I'm just going to assume he wins the MVP again this season, so a guy that has back to back MVPs, has carried the Bucks team to historic accomplishments, and someone who's team choked to lose 4 straight in the ECF last season has a lot on the line this time around. A ring for Giannis would accomplish a couple things. First, he'd finally win one and wouldn't have to worry about being an all time great without a ring, or being perceived as a guy who had to run to a super team in order to snag it. That's big for his legacy.

But it's also huge for his future and the future of the Bucks. If Giannis finally wins in MIL, why should he ever leave? He'll have proven you can win the whole thing despite playing in a small market. The likelihood of him retiring a Buck goes up a shit ton if he's able to deliver this summer.

For LeBron, it's purely about legacy. If he wants to pass MJ as the GOAT, he's gotta win in LA. Period. This is as good a shot as they've ever had to win the whole thing after missing the playoffs last year, LeBron traded his whole team to get him AD, and they've been one of the best teams all year. If he's able to carry them to a title and plays well in Year 17 for his fourth ring, that's going to do a lot for his legacy in my opinion. Winning a title with three different teams? I feel like that puts you in pretty rare company. If they somehow don't even make the Finals or something drastic like that, he's going to take a hit big time.

It would be outrageous if OKC somehow found a way to win a championship this summer, but if they do it's going to do a whole lot for Chris Paul. Right now he's in the unfortunate camp of HOF caliber players to never win a ring. Some were OK with that like Vince Carter, but given how close Paul has gotten in the past, if he carries OKC over the finish line that has to skyrocket him up the All Time Point Guard charts right? I mean he's arguably already there even without the ring. If he's able to do it with that OKC cast, his legend grows even more.

I know this is about individual players, but I'm grouping these two together. It's been beaten into the ground that you cannot win a championship with these two. The way they play drives people nuts, shit the way the Rockets play is blamed for ruining basketball. Both have postseason histories that aren't all that great, but if they were able to finally break through and win a title the entire narrative around both players immediately changes. Two playoff "chokers" would no longer be something you could say about them. Everyone would have to shut up that their style can't work. Then you add in the legacy aspect as well, both guys have a lot to gain if they pull it out.

I'm going to do the same thing with these two. The Sixers have pretty much declared "The Process" part of their rebuild is over. Now it's time to win. Well for two guys who have never made it past the second round, a title would pretty much legitimize them as NBA superstars. What's the knock on them right now? Ben Simmons can be game planned out of a playoff series because he's afraid to shoot. Joel Embiid can't stay in shape and runs his mouth too much. A title would validate the Sixers entire process and who they are as players. We'd have to stop making fun of Simmons' offensive limitations, we'd have to rethink the idea that you don't really win a title around a dominant center in today's NBA.

After what he did in TOR, I'm not sure there's that much room for Kawhi to go up in terms of public perception. That's why a Clippers ring for him would benefit his overall legacy more than his immediate perception. The same way it would help LeBron to win three rings in three different places, if Kawhi does it only in two of those stops it was their first EVER title, well he's skyrocketing up the All Time List. There's no other way to say it.

I could have gone in a few directions for the Celts, but in my opinion the player who has the most to gain if they win their 18th banner and he plays well/is a big factor is Gordon Hayward. First, it would put some Celtics fans who hate him in a gigantic mental pretzel which I would enjoy, but after everything he's gone through and how much people obsess over his contract, he for sure has the most to gain. It would also increase the chances that he stays long term (something I want to happen), and the entire perception around him changes.

If Luka carries the Mavs to another title, he becomes the next chosen one right? I feel like that's where we would be headed given what he's already been able to accomplish in his first two seasons. Think of the way we already talk about Luka, then add a title run to his resume? He becomes a God, no two ways about it. Shit, he might already be one.

After giving it some thought, I think my answer is Harden/Westbrook. You combine the change in public perception with what it would mean for each of their legacies, and they would benefit most from that elusive ring in my opinion. Do you agree? If not, who ya got?