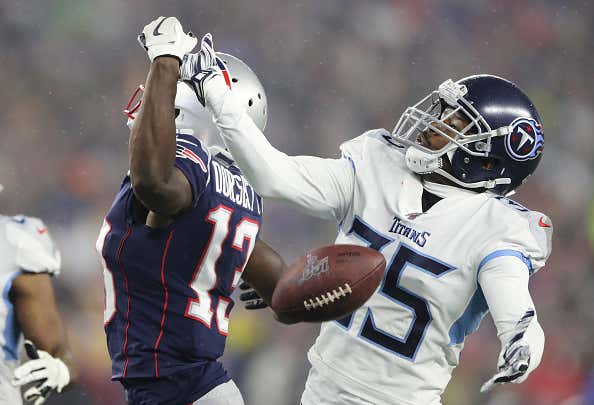 PFT - New Seattle Seahawks wide receiver Phillip Dorsett said in a meeting with reporters on Tuesday that he actually had the chance to come to Seattle a year ago before electing to stay with the New England Patriots.

“I could have went a lot of different places but I just felt like this was the right fit,” Dorsett said of his decision to sign with the Seahawks. “I felt like it was one year – not too late because I could have come last year and I chose to stay in New England, but I didn’t want to make that mistake again.”

Dorsett made it clear afterward that he didn’t regret his time with the Patriots....

“I’m not going to say it’s not any fun. Because at the end of the day, I went to two Super Bowls and won one. So you can’t say there’s no fun in that. There is fun in that,” Dorsett said. “But at the end of the day when you’re at practice, it’s all business. When you’re in the meeting rooms, it’s all business. When you’re on the practice field or the game field, it’s all business. But I met some amazing people there. Amazing teammates, media, equipment managers, coaches. I had a great experience there. And I was just ready for the next step, you know, I’m blessed to be here. I can’t wait to get going. And I’m just thankful.”

If you’ve stopped by here to listen to me drag Phillip Dorsett as being “soft” or whining because he didn’t have any fun in New England, then move along, son. This is not the blog for you.

This is not a Lane Johnson situation. This isn’t some outsider running his mouth about a situation he knows nothing about. This is a former first round pick confirming what we’ve known to be true for NFL generations: Being a New England Patriot is not for everybody. It’s not for the feint of heart. It takes a special breed of rare men, willing to lead a Spartan life of self-denial for a cause greater than all the names on the backs of all the shirts strung together. It’s about sacrificing the now for the delayed gratification of a Duckboat parade in February. Dorsett lasted three years here, which is a long time by the standards of former Colts receivers. About two years and 362 days longer than Reggie Wayne lasted before he noped into retirement. And never forget that the only touchdown passes Tom Brady completed in the 2018 championship postseason - two - were caught by Dorsett.

But all that said, let’s not forget he didn’t leave the Patriots, they left him. He was a sometimes useful zone-stretcher and someone who could run himself open deep on the outside, mainly beating slower corners against Cover-1. But against off coverage and contested balls he was severely limited. And on comeback routes, just average. He finished his Patriots career with just 1.6 receptions per game and just eight TDs in 45 starts. And one of the most baffling stats in Pats history will forever be his 9.1 YPC in 2018, a crazy low number for a guy with his top end speed.

The bottom line is what Dorsett said. He came here, paid the price, went to two Super Bowls and won a ring and now he can relax and have fun being an average 5th receiver for a fun, friendly coach with much lower standards in Seattle. Thank you for your service.