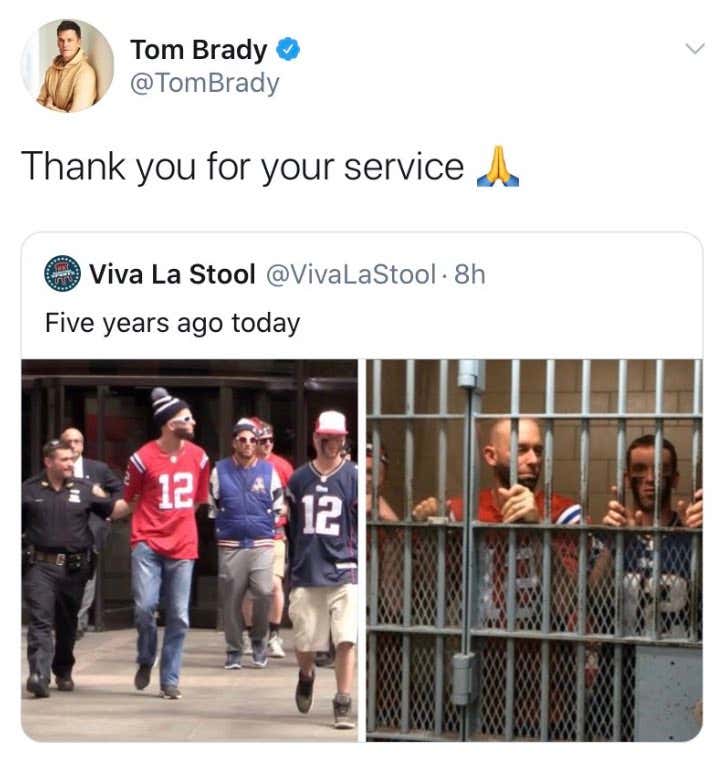 Tom Brady might have taken down the Tweet, but that's irrelevant. Like we all always say whenever someone deletes a post because they said something they regret, everything on the internet lives forever. He knows that too. And I think we can all assume he didn't need to leave it up because the message was delivered to his 1.1 million followers and the world that he appreciates the sacrifice of the four brave men who sacrificed their liberty to demand justice for him. And that message will echo throughout eternity.

Personally speaking, I'm proud to be associated with these courageous freedom fighters. And while I'm a man of few regrets, will be forever haunted by the fact I was not there to stand beside my brothers in that time because I was working for local sports radio instead. I would've considered it an honor to man the barricades alongside them. Even knowing that with my delicate bone structure I would've been traded like a commodity in a Manhattan police lockup. But this isn't about me. It's about these defenders of justice who struck a blow for justice. And the gratitude of the persecuted GOAT they went to prison in order to free.

Thank you for your service indeed. Prayers. That's my quarterback.