Considering how much debate  goes on about politics in America, and the fact we're heating up to another Presidential election cycle this year, I decided to finally take the time to learn where the 2 parties actually come from. It’s a weird path from the first President, George Washington, with no political party, who was selected by the electoral college (69 unanimous votes, Nice); to where we are now, which has basically been rotating parties in the White House on an 8 year cycle since 1950.

So Who Started the Parties?

Basically, Alexander Hamilton (George Washington's Treasurer)  started the Federalist Party which, very loosely speaking, later became the Republican Party under Abraham Lincoln; and Thomas Jefferson, with the help of James Madison, formed the Democratic Party which is the oldest voter-based political party in the entire world at this point, founded in 1792 as the “Democratic-Republican” Party. Here is a chart that shows the complete history off Wikipedia Commons:

FUN FACT: Notably small man and future US President at the time, James Madison, was BOTH a co-founder of the Democratic-Republican Party AND Author of several of the “Federalist Papers” which helped get the Constitution ratified. Meaning that the parties have always been relatively similar from the start since they needed to work together to frame the Constitution, and you know, run the same government.

FUN FACT 2: George Washington, Alexander Hamilton, AND James Monroe all warned that parties could become dangerous if their own interests were to rise above that of their constituents... no such warning from TJ.

George Washington retiring caused the initial split between Jefferson/Monroe (Democratic-Republicans) and Hamilton (Federalists). The Federalists won 1 Presidential election before getting DOMINATED by TJ and his Democrat-Republican pals for decades. The Dems got so dominant there was no longer a legitimate opposition party by 1825, so they split again, leaving Andrew Jackson at the helm of the Democratic Party (which ended up putting them on the wrong side of the Civil War down the line), and the remaining minority of politicians formed the National Republican Party.

So Thomas Jefferson, the guy who probably wanted the parties the most in the first place, died in 1826 right around the time that control of his party went over to Andrew Jackson who set them on the path to become the Confederacy... be careful what you wish for, TJ.

The Federalist Party died, so did the National Republicans and the “Whigs” after them… until 1860 rolled around and that tall drink of American whiskey in a stove-pipe hat, Abraham Lincoln, seized upon a desire to end slavery and improve infrastructure in the USA, and became the first Republican elected President in the US. When you pick the wrong side of the Civil War, like the Democrats did, you don’t get back into power without a LONG hiatus and a rebrand… 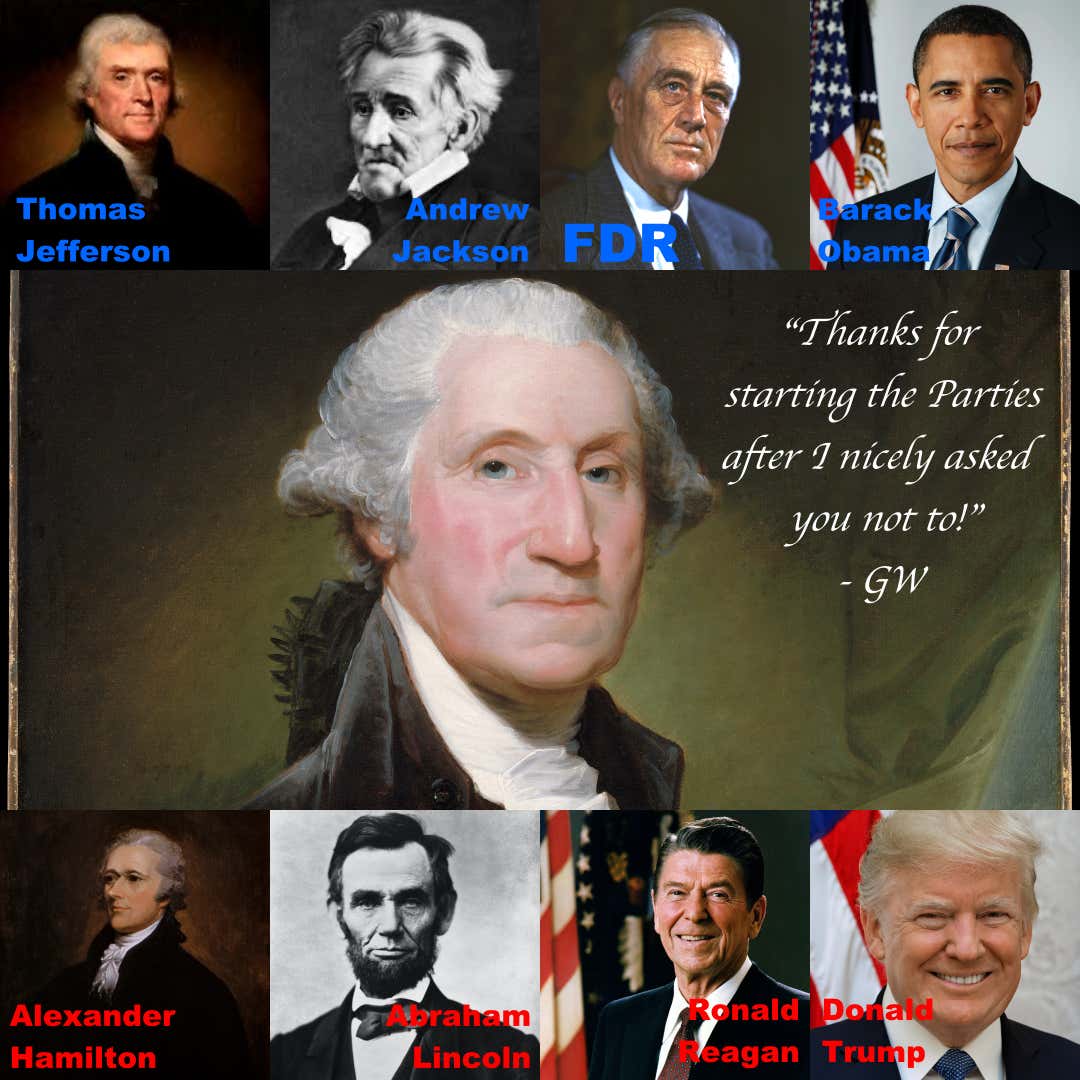 Enter Franklin Delano Roosevelt, aka FDR in 1932. Woodrow Wilson also held 2 consecutive terms in the early 1900s, but Republican control over the overall Federal Government wasn’t fully relinquished until the Great Depression struck and allowed FDR to dominate American politics over 4 terms starting in 1932. FDR turned the Democrats into the party that will make big government work for YOU, while the Republicans became the opposition who want to peel back government control after the implementation of the New Deal. FDRs Democrats provided avenues for labor unions and ethnic/social groups to organize officially, better rights to workers, etc; as Republicans continued to seek to tie government and industry leadership very tightly with fewer regulations. Add in the Democrats taking on the Civil Rights movement under LBJ, and that’s roughly where we still are today.

We’ve been swinging back and forth for about 70 years now, and we’ve got all kinds of little sub-groups on the spectrum, complete with their own media outlets and fundraising teams, but they all still play by the original rules of funneling support up to one of the 2 major parties at the end of the day, just like James Madison drew it up back in 1792.

For more political and election coverage leading up to "Donald Kong v. Joe-Zilla" in November, tune into Hard Factor every Monday through Friday.