Quick refresher on who this is from last summer:

Ethan, comma, One Month Trial already blogged a bit about crocks kid earlier, and yes, I get it... I know how the game works... The ultimate goal is attention and I'm giving it to him.. but I've been isolated for over two months now and my low emotional intelligence is giving me the green light.

Thus my genuine "fuck you" to this tacky human for making life harder & upsetting for workers & citizens of NYC right now. I'm not going to put his TikToks in here because 1) he doesn't deserve any more shine than I'm already stupidly giving him, and 2) his stuff is genuinely not funny and I want to spare you the worst of it. But here's some quick summaries of his recent work:

1. In this one someone is minding their own business & trying to do their job when he approaches with a giant hole in his mask & gets right up in their face: 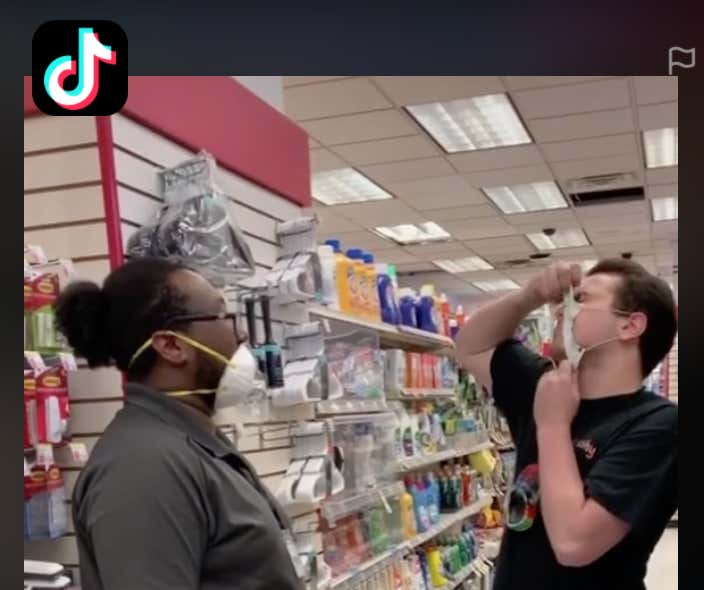 In that same video he then goes behind the counter of a pizza place clearly scaring and upsetting the woman behind the register who felt helpless as she told him to back off. That's it. That's the joke to this hack who panders to the humor of middle school students who don't know what's funny and what's not yet: 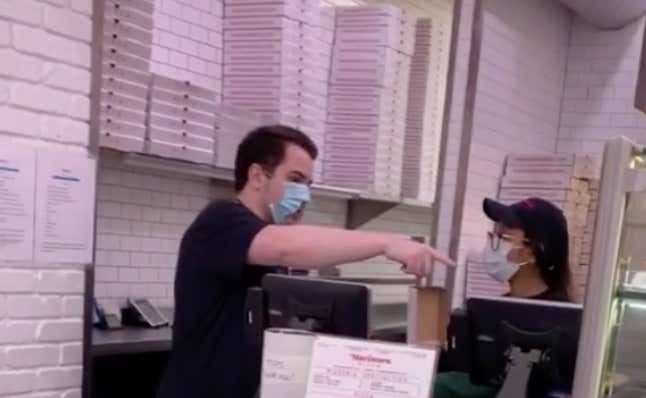 2. In this one he fills a bin with milk and cereal and then spills it all over bystanders on their way to their jobs or back home during an incredibly stressful, strange time in this city. Subway workers will have to close this car down to clean it up forcing riders to get closer together in other cars. Knee slapper: 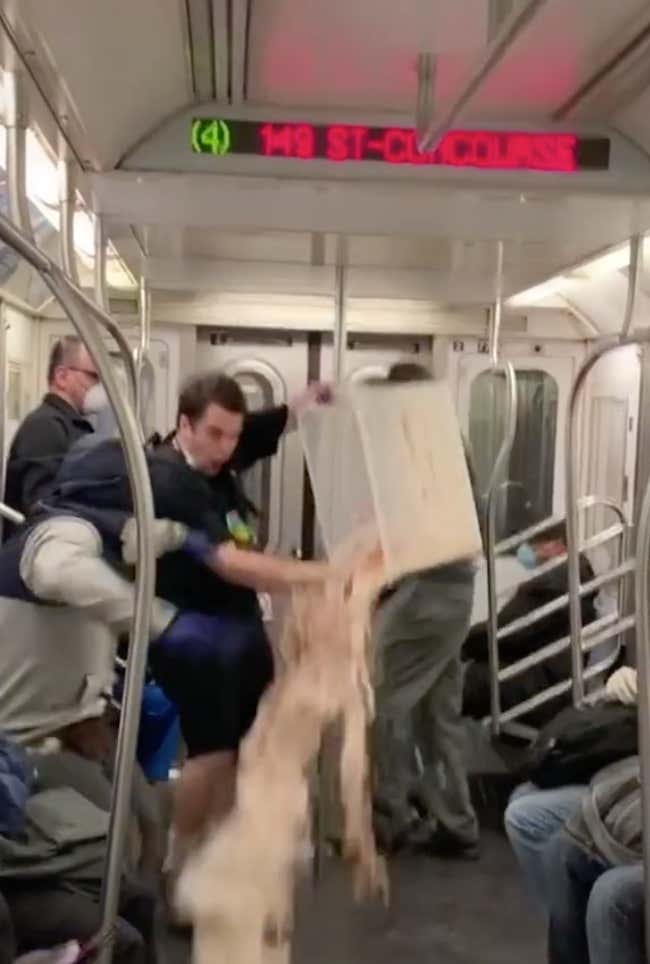 3. He makes a big mess on the sidewalk for someone else to clean up after being an enormous douchebag in a McDonald's. I guess the joke is that he ate a fry off the sidewalk while being a piece of shit at the same time. 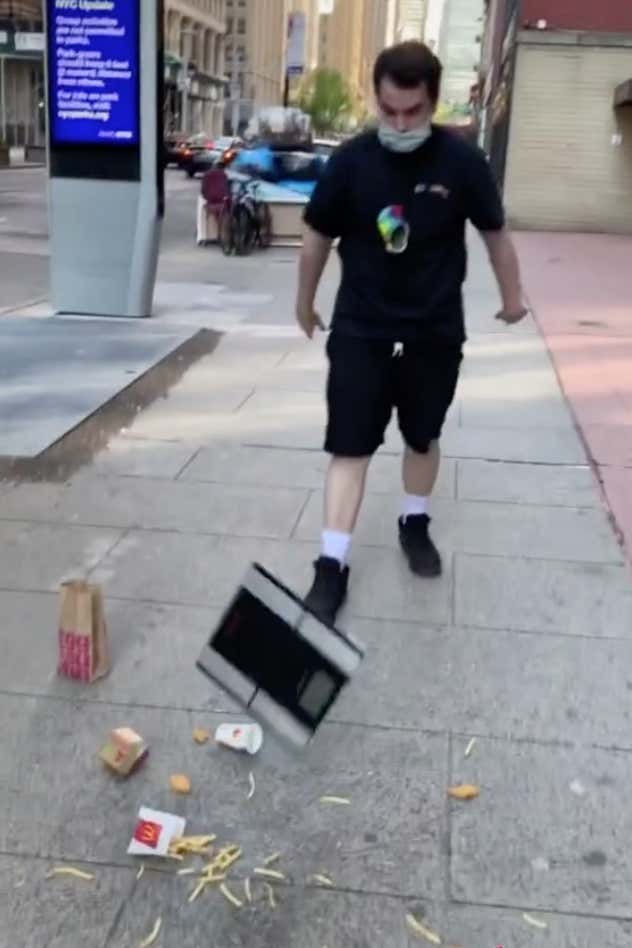 4. He does something wAcKy by strapping a mannequin to himself and then gets in someone's face who clearly doesn't want him there; a theme that continues to be hilarious right now. My guess would be that he does this to workers actively on their jobs most often because he knows they can't fight back. They know they're being filmed and they need those jobs. They're stuck putting up with him: 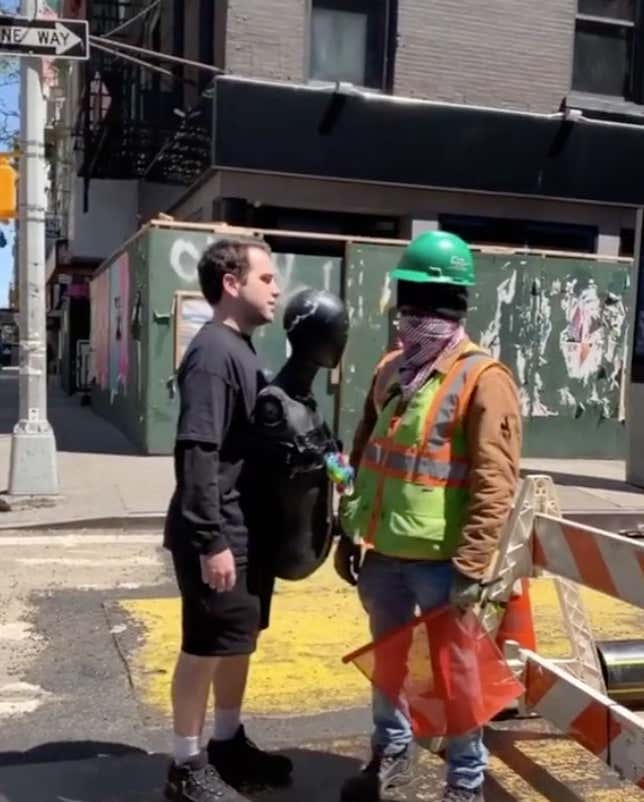 5. Here he brings a Monopoly game board on the subway. A funny concept seeing as it's mid-game. But then he spills it all over people and a kind man goes out of his way to help pick up the pieces for him and it made me angry inside because the nice man had no idea he was helping an awful person make another awful tiktok. 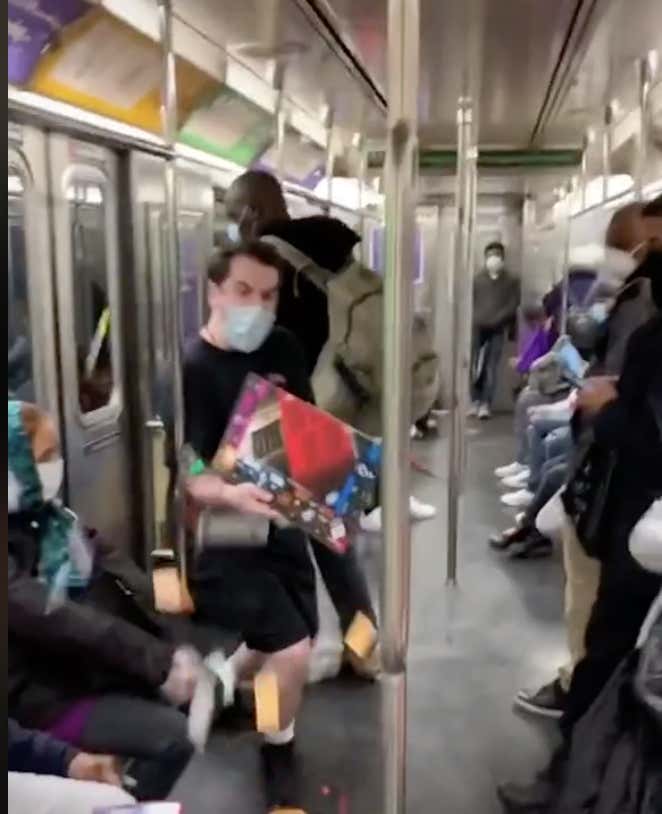 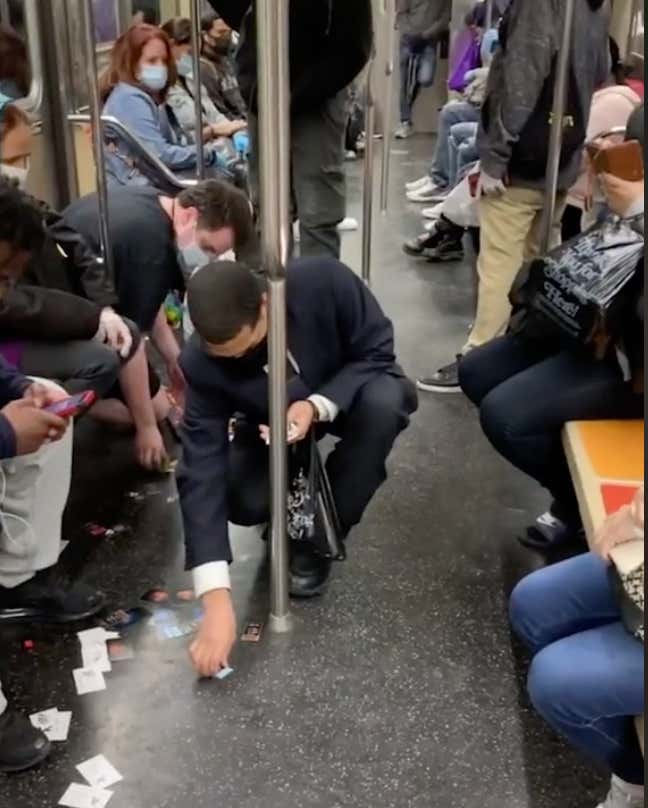 6. Going down into a basement because the doors are open, he accosts yet another man just trying to do his job during hard times for the restaurant business. I prayed that someone would appear to knock this kid the fuck out, but it doesn't happen. Instead what happens is more unfunny voiceover dialogue about young girl sex slaves (LOL!!!) & how he needs to go back to the preschool to find more (evergreen laughs in that department). If you'd like to hate him more you can hear that dialogue in my video at the bottom of this one. 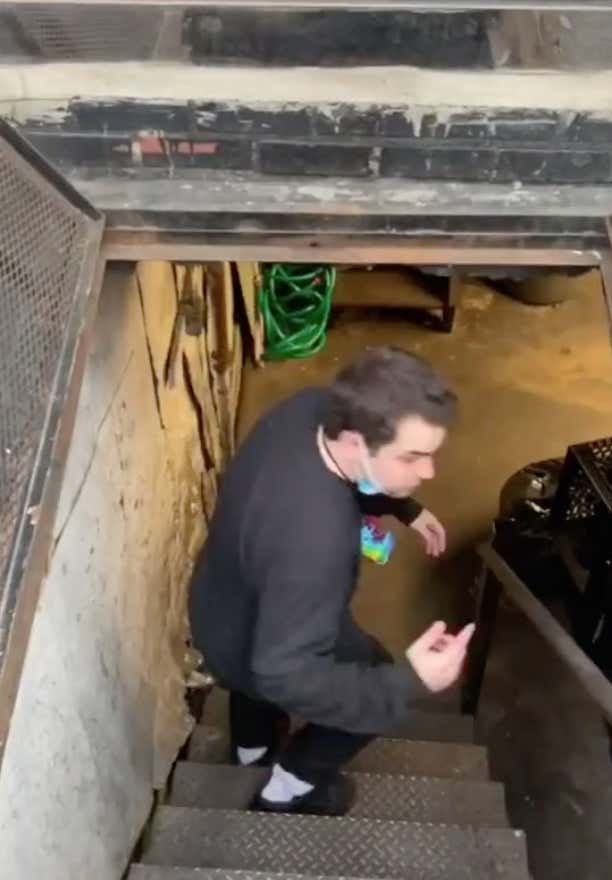 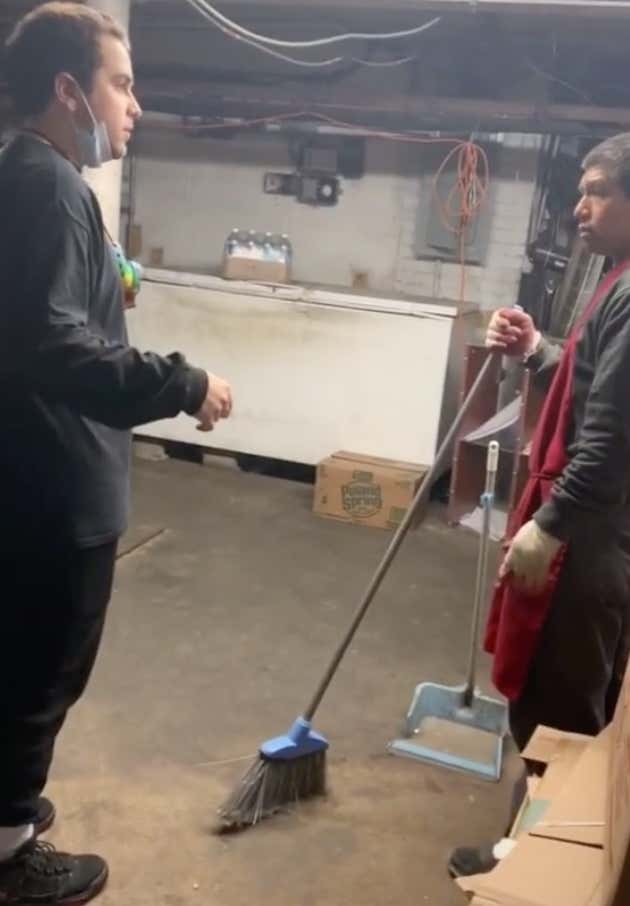 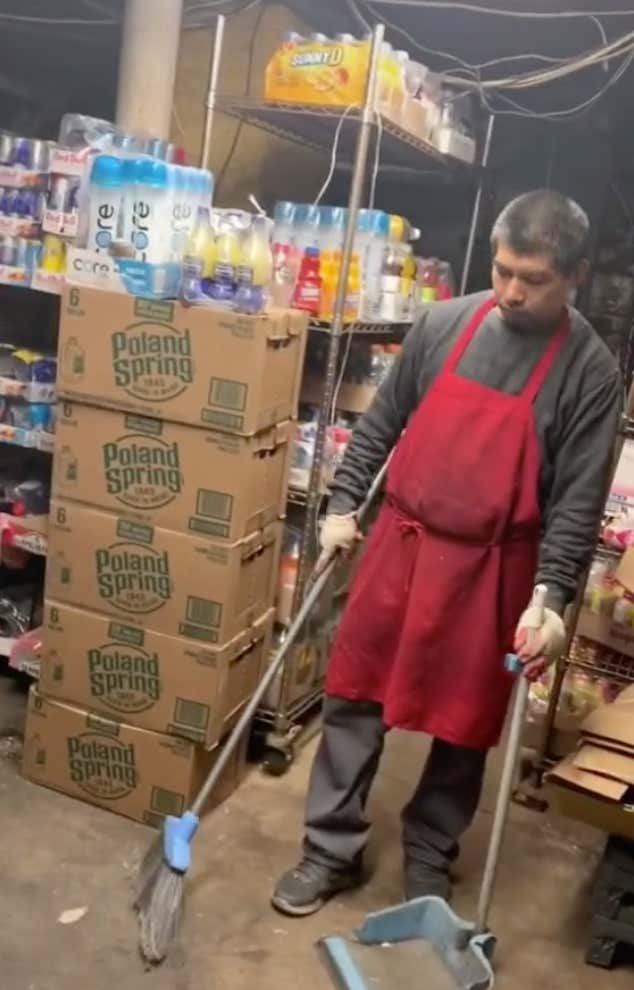 7. You guessed it, another one where he makes a mess for someone else for an attempted joke that doesn't land: 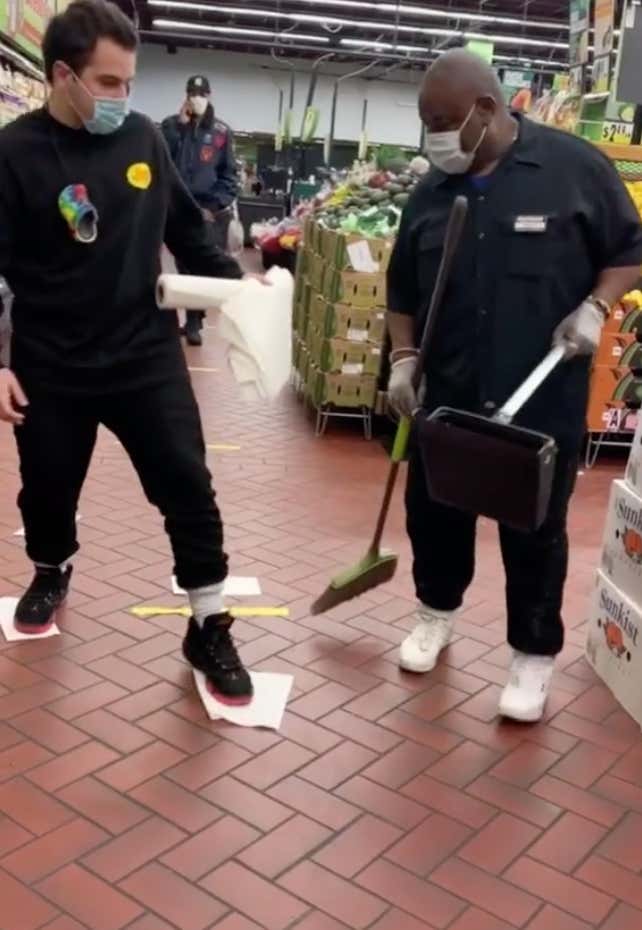 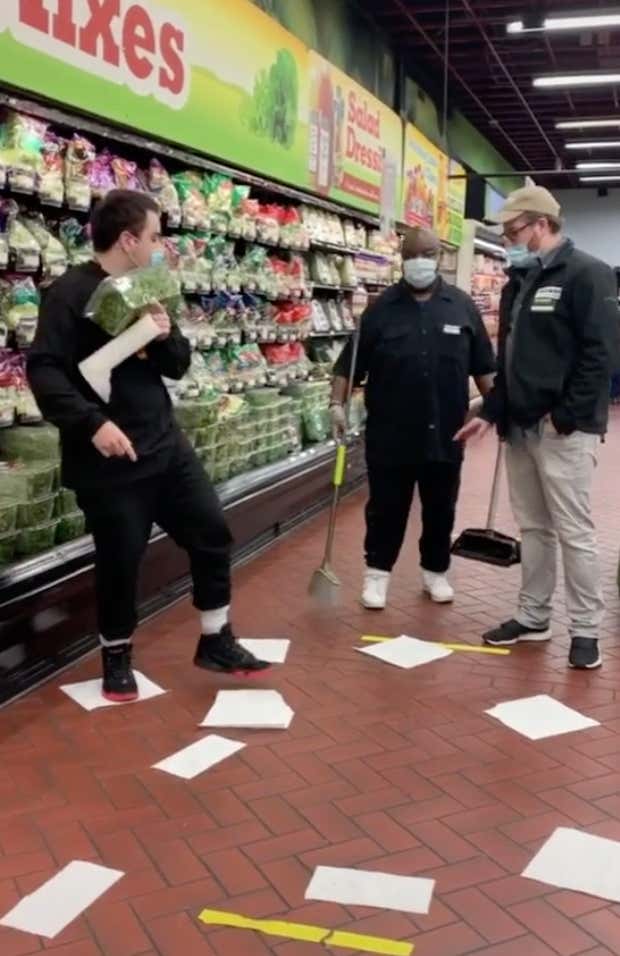 There's more than this & they're all equally painful to watch. And even if it's just a handful, I'm sad for the New Yorkers who've had their days made more difficult or frustrating by this kid.

I'm not gonna pretend like I don't miss the mark from time to time.. but a good rule of comedy is to punch equal or up from yourself if you're making jokes at someone else's expense, but never down. It might make people laugh but it's cruelty, not humor. This guy just punches down over and over because he doesn't know how to make a real joke, and because he's not funny enough to go any higher. It's like an attempted bootleg version of Jackass knee-jerk stuff but doesn't get anywhere close. Millions of followers & likes don't mean much in the humor market when the audience is kids who've never been the ones getting punched down on yet. As they grow I can only hope his following starts to dry up.

I honestly don't remember why he was ever at Barstool or what he did there, but I'm glad he's not there anymore. Hopefully it's a case of being young & he figures it out because right now he is truly continuing to kill the vibe.