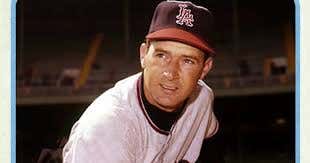 Dick Wantz dies at the age of 25, a month after making his debut with the California Angels. In his one inning of work, Wantz allowed two runs in one inning against the Cleveland Indians. A week later, Dick Wantz experienced severe headaches, and it was discovered that he had a malignant brain tumor. Returning to California, Wentz underwent surgery, but would not recover.

Richard Wantz was born on April 11, 1940, in South Gate, California. After playing at USC, Wantz signed with the expansion California Angels following a tryout in 1961. Working his way through the minor leagues as a reliever, Dick Wantz made the big league roster following a strong Sprig Training in 1965. On April 13th, the first game of the season, Dick Wantz made his major league debut coming in the eighth inning as the Halos hosted the Cleveland Indians at Dodger Stadium in Chavez Ravine.

Opening Day on April 13th had been a rough day for the California Angels as they trailed 5-0 after seven innings. Starter Fred Newman allowed three runs in six innings, while Don Lee gave up two runs in the seventh inning. In the eighth inning, Angels manager Bill Rigney called upon Dick Wantz to make his major league debut. Wantz struck out Max Alvis to begin the inning, but the next two batters Vic Davalillo and Larry Brown each hit doubles. Joe Azcue followed with a single to score Brown extending Cleveland’s lead to 7-1. Wantz would strike out Ralph Terry, who pitched a complete game for Cleveland, earning the win. The next batter Dick Howser lifted a fly ball to Jose Cardenal in centerfield.

Dick Wantz would not get into another game, as it was still an era in which pitchers were expected to pitch a complete game. While the Angels were in New York to face the Yankees, a week later, Wantz began experiencing headaches. When the team arrived in Detroit, a few days later, doctors discovered that it was a malignant brain tumor causing the headaches. After spending a week under observation, Dick Wantz returned home to California, where doctors scheduled him for surgery.

Less than a month after making his major league debut, Dick Wantz underwent surgery at a hospital in Inglewood. Doctors removed as much as the tumor as they could but discovered that the cancer had spread into both sides of Wantz’s brain. The three-hour surgery on May 8th would develop complications as the rookie pitcher fell into a coma. Dick Wantz never recover, as he passed away five days after the surgery.

Dick Wantz was survived by his wife and a five-year-old son, several members of the Angels would serve as pallbearers, including GM Fred Haney, manager Bill Rigney, and team President   Bob Reynolds.