As you know, I have an agreement with foreign gangsters that have alerted me that they will harm my family or friends if I don't pick things for $15. So understand, this is bigger than me at this point.

$15 to make a team: Two guards, two forwards and a center

Guys, I'd love to get cute here and not pick MJ. Really, I would! But it'd be the wrong answer.

I was going to clarify for what purpose (build a team for a series, a season, five seasons, etc) or what era the team would be in, but it doesn't really matter. The things that I value with MY fifteen smackeroos translate across the eras. Jordan and Stockton combined to have 15 All-Defense appearances. Stockton also had a ten-year run of averaging 16/3/13 with 2.6 steals per game on 52/39/83 shooting. He's the ball-handling, defense and floor spacing I need to play off of Mike.

The perfect place for Paul George. We've seen how good he and his team can be when he's playing as the clear second option. He also adds another four All-Defense teams to the squad and he was at a career-high assist percentage before the season was halted. Playoff P also doesn't matter here because I have Michael Jordan. PG has also been one of the more prolific 3P shooters (39% 3P on eight attempts per game) over the last five seasons. Perfect fit.

He slides into the Dennis Rodman role nicely of someone that MJ will have to keep in order, or the structure of the entire team might collapse and send the old man back to the Birmingham Barons. Over a seven-year stretch, Artest averaged 18/6/3 on 43/35/73 shooting while winning Defensive Player of the Year in 2004 and making four All-Defense teams. Having him on his side also prevents Artest from breaking Jordan's ribs....again.

I've got scoring in Jordan/George, shooting in Stockton/George and plus defense literally everywhere. What's left? I need a board man. By the numbers, Dwight Howard is the best rebounder available for centers. But then I'd have to have Dwight Howard on my team and I think Jordan might actually cut the brakes to his car. Give me Deke instead. He's 10th all-time in total rebounding percentage: 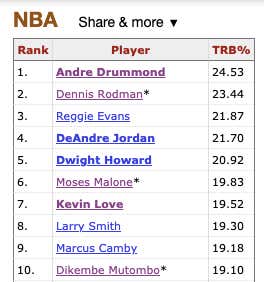 At the time he retired, only Rodman, Malone, and Larry Smith (of course) were ahead of him. I trust Deke and some gang rebounding to be more than enough. He also has those four DPOY awards and wasn't awful on offense (12 PPG on 52% FG/68% FT%) before he turned into a second unit defensive specialist for the last part of his career. Defensively I've got Stockton up top, Jordan/George/Artest can switch on most assignments and they all funnel everything into Mount Mutombo. 82-0 regular season, 16-0 postseason.