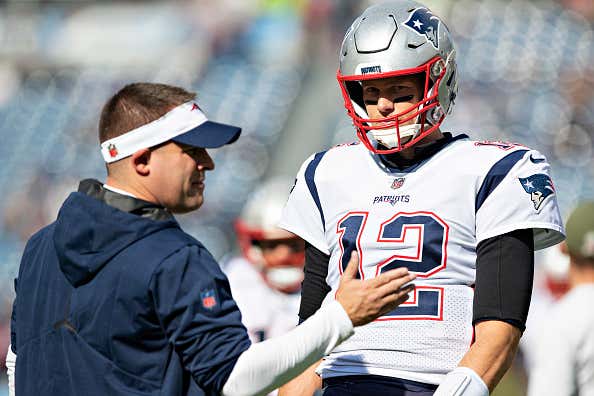 Gary Myers is with the NY Daily News. He also wrote the book "Brady vs. Manning." And by way of full disclosure, I had him on my old WEEI podcast to talk about the book for whatever that's worth. I guess you could say we have the bond that can only come from having met one time in a tiny recording booth five years ago. But he seems to be a guy who does some research before he puts his name on a report. Make of that what you will. Your mileage may vary.

I was hoping that the first good thing to come out of Brady's decision to join all the other snowbirds in semi-retirement along the Sun Coast was that I'd no longer be in the business of having to respond to everyone's speculation about the interpersonal relationships between grown men who never talk about their interpersonal relationships. It was bad enough trying to put a number on the emotional IQs of Brady and Belichick these past few years through their body language and what their eyes were telling us. So that every interaction at practice and every trip to the sideline for Brady as the punt team came on became a bigger obsession than Jim & Pam in Season 2. Now I'm finding out that Josh McDaniels was the Roy and I have to day with this? Every time I think I'm out, they pull me back in.

Look, I have no idea if Brady and McDaniels were at odds. There is no way of knowing. From the outside looking it, it seemed fine. Of course they butted heads at times. They have for year. Brady famously had a purple-faced screaming match with Bill O'Brien when he was the coordinator. I don't remember that making him sell his house and move a thousand miles to the warm, comforting bosom of a 7-9 team where the OC loves him more. These guys are mega-competitors with strong wills and savage egos, otherwise they'd be in different careers, sitting home waiting for their stimulus checks.

Besides that, it's not like they don't have history. McDaniels and Brady have been partnering up through two tours of duty now, during 12 seasons in the last 15 years. On McDaniels' watch, Brady has won three Super Bowls, two Super Bowl MVPs, a third Super Bowl where he threw for 505 yards and two league MVPs. If he's so "tired" of working with the architect of that success and needs "more input into game plan," than he is a Tom Brady I no longer recognize.

But to hell with it, let's play the game. Let's assume the "excellent source" that surprised Myers with this info is, in fact, someone who knows and is telling the truth. Just for the mental exercise of it, to stay sharp for the next time we're engaged in wild speculation about feelings that are being felt by the men who are feeling them like we're in a group therapy sesh or a circle jerk. Let's assume Brady left because he's sick of his head coach and his OC, either in whole or in part.

Then I say, fine. That's a perfectly valid reason to go. And if true, it would be the worst idea ever to try and make him stay.

This wouldn't be Aaron Rodgers growing sick of Mike McCarthy's shit. In a balance of power equation like that, you side with the player 1,000 times out of a 1,000. That's asymmetric warfare and the coach would never stand a chance. But even the greatest football player of all time doesn't win that power struggle when the head coach is also the greatest of all time and the OC he's butting heads with is only one year older than he is.

The Pats think enough of McDaniels to have paid him enough Kraftbucks to back out on the Colts job and do permanent harm to his reputation. They didn't do that just to take a player's side if there's a conflict there. Even if the player in question is the son Mr. Kraft never had. A 35 year old Brady maybe wins that power struggle. A 43 year old Brady doesn't. And as I recall, Brady never had the slightest hint of a power struggle then or ever. Until reports like this over the last couple of years.

Which is why I'm not buying this one. But if it is true, then Brady did the right thing. If you don't have in you to put up with the constant pursuit of perfection in New England, don't undo any of the good you've done here. Just go play for Bruce Arians and Byron Leftwich and their No. 3 offense in the league and let someone who's got everything to prove take over in your place. At least when Jarrett Stidham takes over we won't have to listen to any talk about whether he's truly happy or not.

As for this report, save the receipts  of that excellent source, Gar.