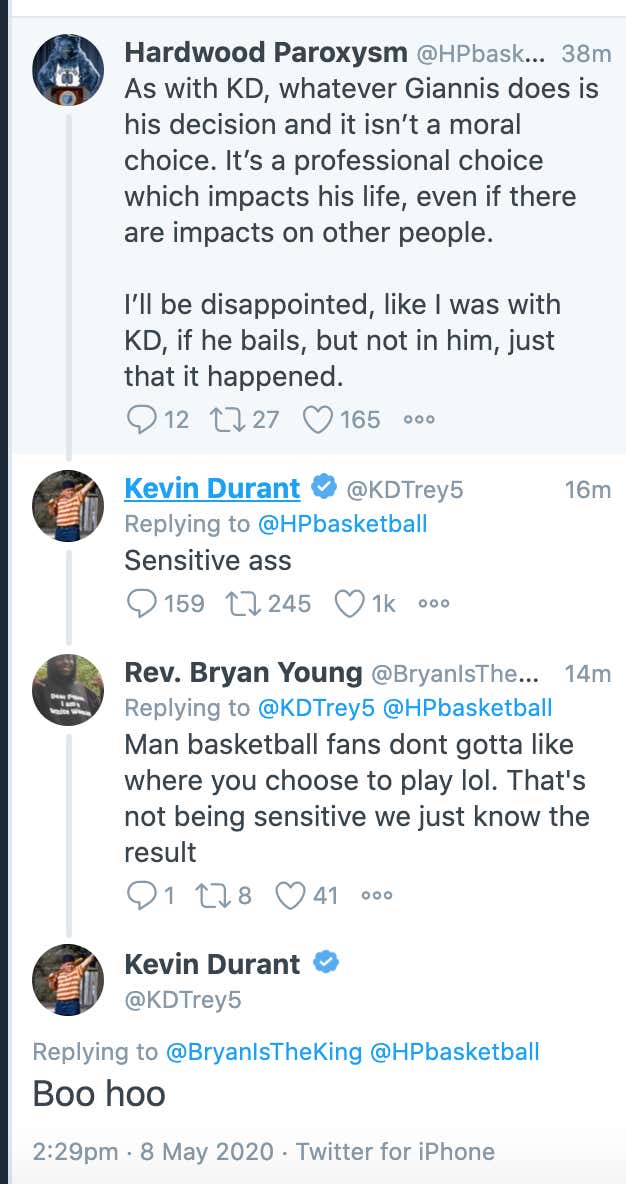 We got ourselves another Kevin Durant Twitter argument. Personally I love this one. Why? For some reason 'sensitive ass' is fucking hilarious. Two words, straight to the point. I don't blame Durant here. What got him going? Using the term 'bails' as if players have to stay with the same franchise forever. Or if Durant did something wrong. Sure, going to the Warriors sucked and is soft, but he was a free agent. Not like he forced a trade at least.

But the real gem in this exchange? Noted Stoolie Kevin Durant using the classic 'not uh, you are' argument. Never fails, always holds up.

I know people will say 'why is Kevin Durant even on Twitter?' To that I say, thank God he is. The man delivers content at all times. I actually appreciate him not using burners now and mixing it up with people. Remember he got into it with HP before over graphs.

Oh and then he just flat out calls someone out for being awkward and scared to say shit in person. That may just sum up Twitter perfectly there:

I will always be fascinated by the Durant to the Warriors thing. It will be talked about for my entire life. It's something that ultimately changed everything about the NBA. You had the Warriors turn into even more of a dynasty. You have Kevin Durant, the biggest star who just communicates via social media all the time. There's a ton to unpack in that alone. But the fact you have him talking about Giannis leaving Milwaukee is something.

Now just hit us with the 'I am rubber and you are glue, whatever you say bounces off of me and sticks to you' line KD. I know you want to. Let's hit the classics: