Pete Davidson is a quarantine inspiration. Not only is he saving money by living in his mom's basement, but he's using this time to become a better person and sober up.

"I'm doing well... I mentioned that I wasn't doing drugs, that I was trying not to, and then literally 3 hours later a lady rang my doorbell with a full bag of weed and gave it to my mom and said 'I heard your son needs this.' So if you see this... please do not do that. Because I will sell it."

Gang, come on. This man publicly said he's trying to stay clean and instead of applauding his positive decision, 3 hours later people are driving to his mother's house to give her a giant bag of weed for her son? That's not very supportive! Kind, generous, and a little creepy, sure, but definitely not supportive. The last thing he needs is your herb temptation reminding him of what he's missing in a time when he's already missing so many basic necessities like... 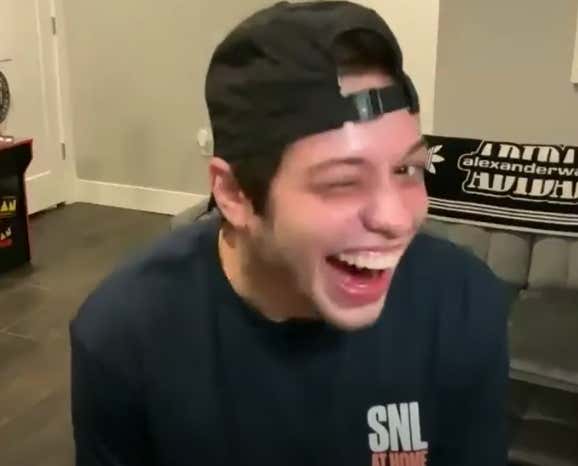 And even if temptation doesn't get the best of him, his response to your actions will. I mean, you're basically forcing him to traffic the green just to get it out of the house! THAT'S how dedicated he is to his sobriety; he's willing to become a drug dealer to ensure it. How many men can say that?

So stop fucking around and being wasteful by giving him bags of weed. If you got 'em, smoke 'em.