Unlike, say, the eponymous old fart who drops dead after swindling Kenny Rogers (RIP) out of his last swallow of whiskey in "The Gambler," I'm not good at readin' people's faces. So you tell me, does this man look worried to you? 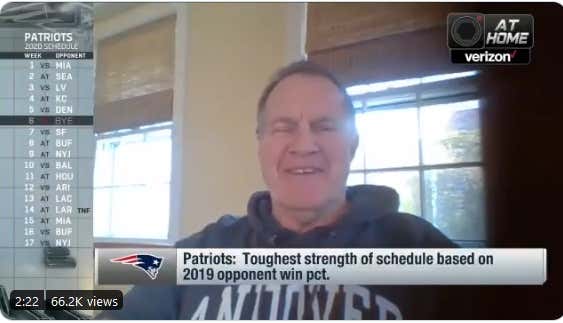 His franchise is at a crossroads. He's facing the most critical transition in two decades. Fate hands him the toughest strength of schedule in the league.

The schedule makers set up his season like an "American Ninja Warriors" course, with three trips to the West Coast including back-to-back weeks at the Chargers and at the Rams four days apart, which will necessitate staying out in LA all week like it's a Red Sox West Coast swing. Plus the added challenge of five prime time games.

Not to mention he's breaking in a new starting quarterback because the one he supposedly couldn't live without just negotiated his way out of town and is living in semi-retirement in Florida with all the other snowbirds.

And here's Belichick, a Man in Full. Living his best life. A hail fellow, well met. The king of all he surveys. An Emmy Award nominee, cyber grabassing with his 'NFL Top 100' bud Rich Eisen without a care in the world. Nike the dog is barking. Linda is fiddling with the lights to make him look his best, and that silent "Thank you" is simply precious.

This is the countenance of a man at peace with all his decisions and confident in his future. Leadership in a time of crisis, personified. Calm. Measured. Convivial. Projecting an air of competence to send a message to his concerned citizenry to remind them his steady hand is still on the wheel.

I mean if nothing else, just watch the last half a minute or so when he reminds Eisen his team has played without Brady before, and went 14-6 with three different quarterbacks. Left unsaid, but I'll say it, is that one of them was a 7th rounder who was a backup in college, another who played DII ball, and the third was a rookie. If he's not worried, I'm not worried. If he's on Island Time, I'm on virtual Island Time. If he's relaxed enough that he can joke about Nike prepping for the supplemental draft, there is nothing in the world to be concerned about. They've got this.