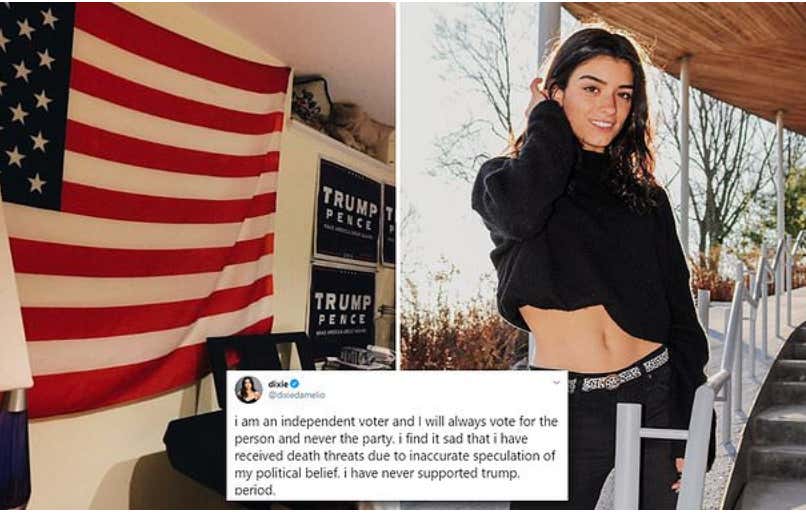 DM - Influencer Dixie D'Amelio has revealed that she has been getting death threats after her old photo of a room with Trump-Pence campaign signs on the wall resurfaced online. The 18-year-old, who has more than 23 million TikTok followers, came under fire on Tuesday when a fan tweeted a picture that was shared on her VSCO account in 2017. The image shows someone playing a keyboard in front of a wall that is decorated with an American flag and three Trump-Pence signs. 'UMMMMMMM,' the person wrote, prompting Dixie to deny it was her room. 'Bruh this isn’t even my house lmaoo,' she clapped back.

Not nice!  I, CBS, am not one to get political, so we'll just leave everything here at face value!  People should NOT be sending death threats to ANYONE, let alone 18-year-old girls! So what if she can make more money on 8-second dance in one day than anyone's grandparents did working in a 800 degree steel mill, it's her God given American right to Tik and/or Tok in anyone's house who has Trump/Pence signs hanging in their room!  Clap back, Dixie!  Clap back for your rights!  Keep on "Tokin'", as the kids say!

PS - You know who else for some reason has a TankTok?  FORTNIGHT BOY!  Go add on to his 29K measly followers!  What a lazy LOSER having more people follow him on TokTik than a sellout at the Boston Garden!

PSS - Fortnight Boy is also live again today!  Tell him to thank me for doing his job for him bloggin!  AGAIN!