What's great about this is Axl isn't what you'd call an active twitter user.

He's the total opposite of a Barstool employee.

He tweets maybe once every month to 6 weeks and follows 0 people, like Skip Bayless.

So this one came from the clouds.

What's even better is that he didn't @ Treasurer Mnuchin. So either he's one of those weirdo's that runs searches on their name to see what randoms are saying about them, or somebody must have tipped him off.

"Hey Steve, you're not gonna believe this but Axl Rose just called you out on Twitter…

"Jesus Steve, he's the lead singer of the greatest glam band of all time."

"They're not glam. They're hair metal."

"No they're fuckin not. Glam metal. But either way he's talking shit about you."

I can only imagine Axl pushed the three Stephanie Seymour lookalikes he had in his bed at the time out, and looked at his phone in utter disbelief. Much like the cake eater kid in Sandlot did when Porter told him he plays ball like a girl.

What has Axl Rose done for his country lately?

How about reuniting the greatest rock band of our generation for starters? The guy finally swallowed his pride, admitted to himself the Chinese Democracy bullshit was a joke, and extended the long-overdue olive branch to Slash, Duff, and Richie (fuck Steven even though he rocks). Takes a giant man to do that. Not only did he put the band back together, but after everybody said they'd be a joke and sound like shit he proved the haters wrong. Sure he looks like an obese lesbian now, but he still sounds incredible. The entire band does. Like they never missed a beat. It's crazy. (I've seen the 6 times in the last two years. Only time I've been disappointed was in Detroit when they played for only 2 hours. Not too shabby) 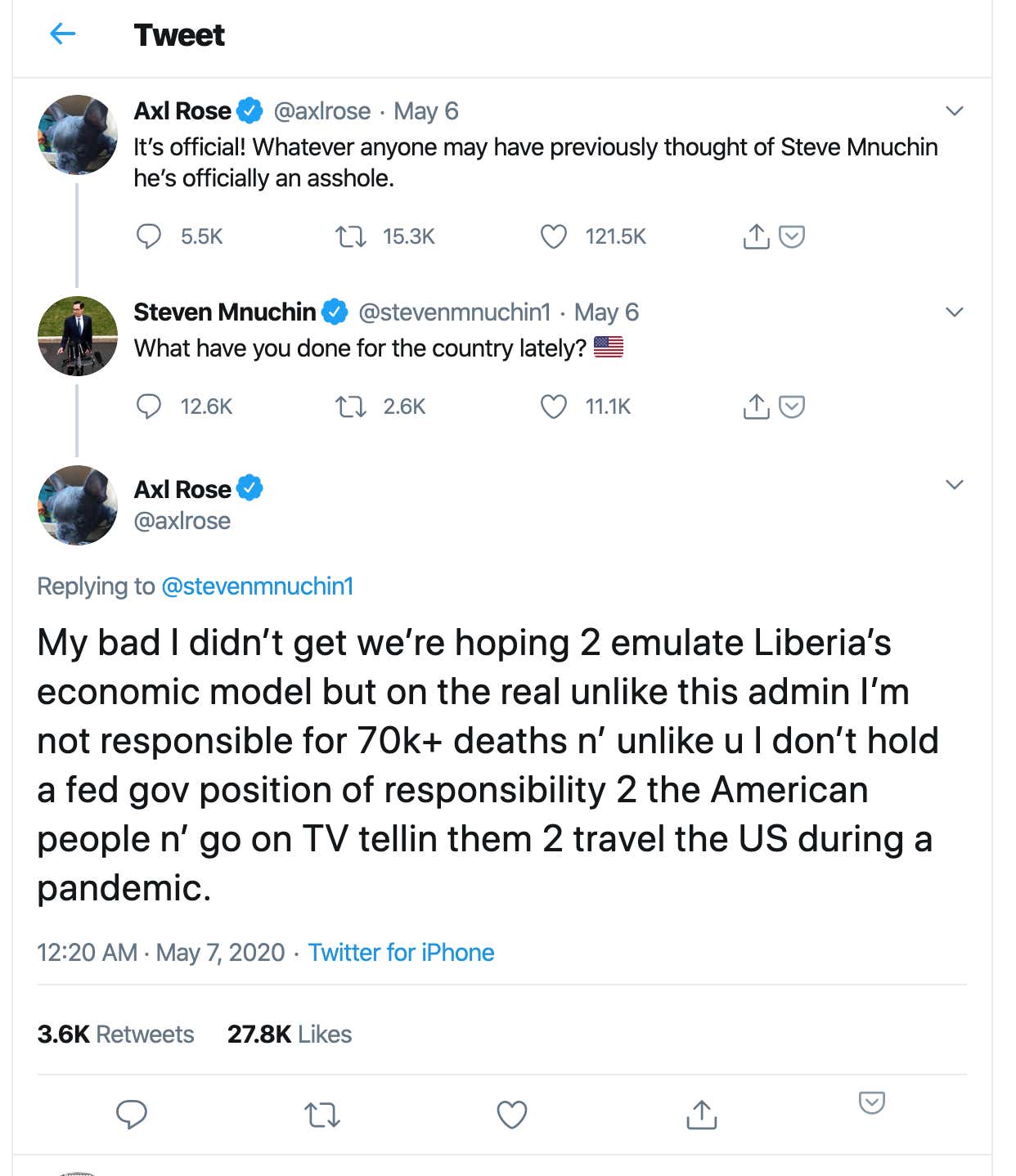 I don't have the energy or time to expound on West African economic policy and how it relates to the American financial system but I don't feel I need to because Axl did a nice job in 280 characters. And he's the expert.

All jokes aside. Whoever is pulling the strings on the simulation is completely fucking with us at this point. Nothing makes sense anymore.

Here's some jams from the guns to rock you sleep tonight.