First lets get my pre-leak predictions out of the way:

Followed by the actual schedule: 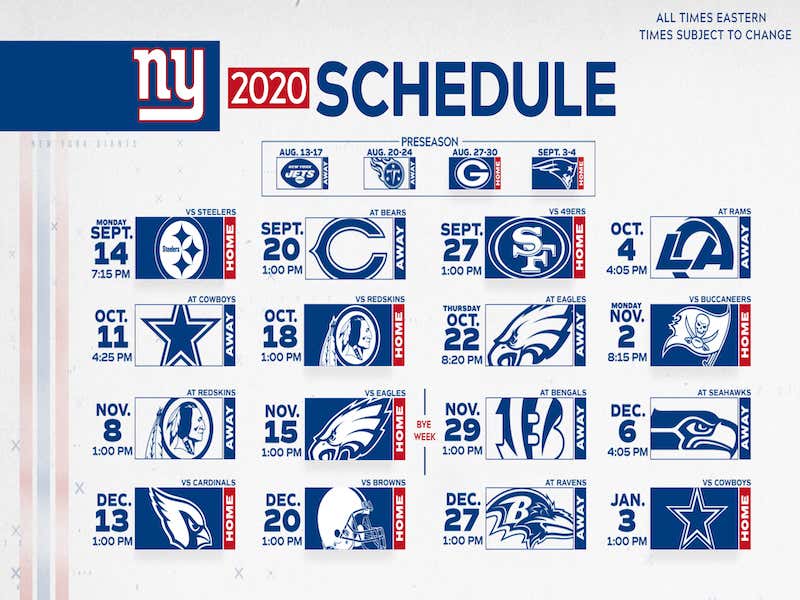 Yup, that plays out pretty perfectly all things considered. I would rather have predicted that 2nd L come against the Niners followed by the march to glory starting against Da Bears and would rather win Odell's Revenge Game against us (as well as Danny Dimes' Revenge Game against Big Mouth Mayfield). But we take what the schedule gods give us, which includes a whole lot of good defenses the first month or so of the season. Holy shit, I hope this offensive line we are all having wet dreams about comes through because that is a doozy of a gauntlet. Or maybe the first month of the season gets wiped out and we don't have to worry about TJ Watt, Khalil Mack, Nick Bosa, and Aaron Donald going for out sweet Daniel's head and throwing hand.

Something tells me that the Hog Mollys are ready to do whatever it takes to keep their quarterback clean and upright this season.

Daniel Jones must be a pretty good guy if the alleged meanest man in the NFL likes him. Real swag is no swag. Forever.

- The Giants are a lock to win the Snoopy Bowl this year. Coach Judge isn't losing to Googly Eyes Gase in his first game with Big Blue. No chance. Time to bring the trophy home, even if it doesn't exist anymore.

- Kinda love the weirdness of being the early Week 1 Monday Night Football game for once. We won't get all the attention and eyeballs on you of a typical game because a lot of people are still heading home from work (if commuting is a thing again by September) and the late night matchup with the always awkward announcing crew always muddies things up. Facing Grizzly Adams Roethlisberger and the Giants sister franchise in the Steelers is a fine way to open the season for me.

- Speaking of weirdness, that stupid Cowboys star not being somewhere in September matches the fake reality we are living in during 2020, with the Giants Twitter meme'ing their way through it.

- I'm not sure who in the Eagles franchise is sucking dick in the schedule makers office. But I've had just about enough of those short weeks to Philly where the Eagles and their skell fans wear the black jerseys. It's okay though, the Giants win that Monday night slopfest in Philly last year if Dimes was healthy

- Three night games seems like a fair number for a big market team that could be a lot of fun to watch, which is about my limit as an old washed up man. I don't know how that Bucs game will turn out, but the nonstop barrage of highlights of the Giants beating Tom Brady in the Super Bowl and Daniel Jones beating the Bucs in his first start are going to be what I imagine a PornHub Premium membership is like. Remember when Steven Cheah did a full game film breakdown of Daniel Jones? Me too! Wanna watch it again? ME TOO!

- I would prefer a bye week before that Eagles game instead of after it or even before that Thursday night game. But anything that isn't super early like Week 4 or super later like Week 12 is fine with me.

- This is some MALARKEY

- I really really reeeeeeeally don't want to lose that Browns game against Odell (if he's healthy). Something tells me he is going to do something before or after the game that the kids would call "Extra"

- Here's to the Ravens running train on the AFC again and resting Lamar in Week 16. I love the lack of a divisional gauntlet to end the season

- Pleeeeeeease God, let that Cowboys game mean something other than what our draft position in the Top 5 will be the following season

Fuck it, 10-6. Or 8-5. Or 2-1. I have no clue how many games are going to be played let alone who will be healthy during the games that will be played. But I'm carrying over the good juju from the draft into the schedule release. Sue me. Playoffs, here we come.