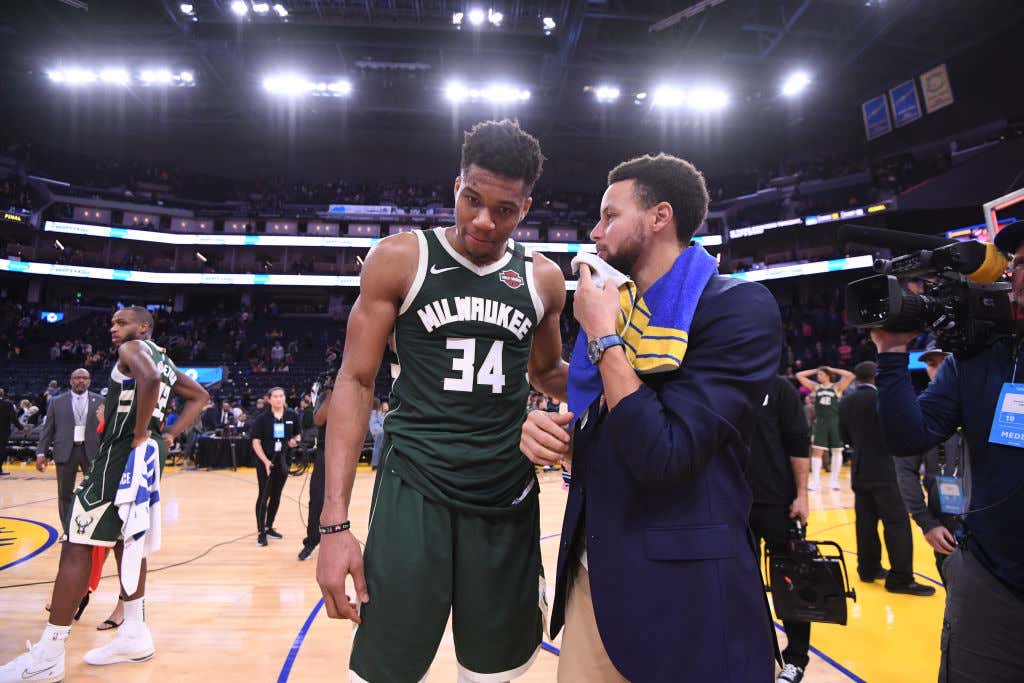 (SF Chronicle) - Though all indications are that he's on good terms with team management, league sources believe that Antetokounmpo would want out of Milwaukee if he loses confidence in the franchise's ability to win championships," Letourneau wrote. "This is why the NBA shutdown could buoy the Warriors' chances of landing their long-coveted Greek.

The Bucks will do whatever they can to keep the face of their franchise long-term, but they recognize that the Warriors could offer probably the best package if Antetokounmpo decides he wants to leave. As last week’s Bleacher Report story suggested, Golden State can dangle Wiggins, a 2020 first-round pick expected to fall no lower than No. 5, Minnesota’s top-3-protected 2021 first-rounder and the Warriors’ 2022 first-rounder.

What would separate Golden State from other suitors, however, is that it could include Klay Thompson or Draymond Green in any potential trade. That would be a steep price, especially if the Bucks make Antetokounmpo available this offseason. Parting with multiple lottery picks, a starting small forward (Wiggins) and a cornerstone of an NBA dynasty (Thompson or Green) is quite a risk to acquire someone entering the final year of his contract.

But according to a league source, the Warriors have been preparing for years to make a bid for Antetokounmpo. General manager Bob Myers knows that to chart a course for long-term greatness, a team must maintain flexibility — both in terms of its roster and future assets.

This is honestly the rumor that just won't die. It's not exactly breaking news that GS would be interested in Giannis, the same is true of every single NBA franchise heading into the summer of 2021. But there's no denying there has been smoke for quite some time now about Giannis and GS finding a way to join forces. You don't have to like it, you can try and deny it if you're a Bucks fan, but it's out there

and now we're back at it again today. Now let me be clear here. That fake trade that Bleacher Report put out? That Giannis could be had for Wiggins + GS 2020 Pick + 2021 Top 3 Protected Pick + GS 2022 Pick is trash. I get it, MIL is going to be in a tough spot if Giannis wants out and they are going to have to take what they can get, but considering Giannis doesn't have to make a decision until next season, I don't see them trading him THIS summer for that package. But if GS throws in Klay or Draymond? That would be something. Both are signed long term, and while you may think Draymond stinks, he is a piece that the Warriors could throw in that other suitors wouldn't be able to match in addition to everything else. I would think GS would prefer to have Giannis/Klay/Steph as a core, but if you have to give up Klay to get Giannis, you do it.

We know the GS front office knows how to pull this shit off. That's what would scare me so much as a Bucks fan. I dunno how they make the cap work but that's why I'm a blogger and not running an NBA team. I just know it would be a wrap for the entire league once again if Steph is able to pair up with Giannis and even more so if they are able to find a way to keep Klay. I'm going to need Adam Silver to pull a David Stern and block that shit. I'm not sure what grounds he would have to do it, but Stern found a way with CP3 so it can happen.

Maybe you think this is all hot air, which is certainly possible. But I've come to learn that in this league where there's smoke there's usually fire, and Giannis to GS has been making so much noise for months now, we have to take it seriously. Would people turn on Giannis like they did Durant if this happened? It would be a little different because he'd be traded, and if MIL is going to lose their best player it's imperitive they accept the best deal, which GS could offer.

We're all so fucked.